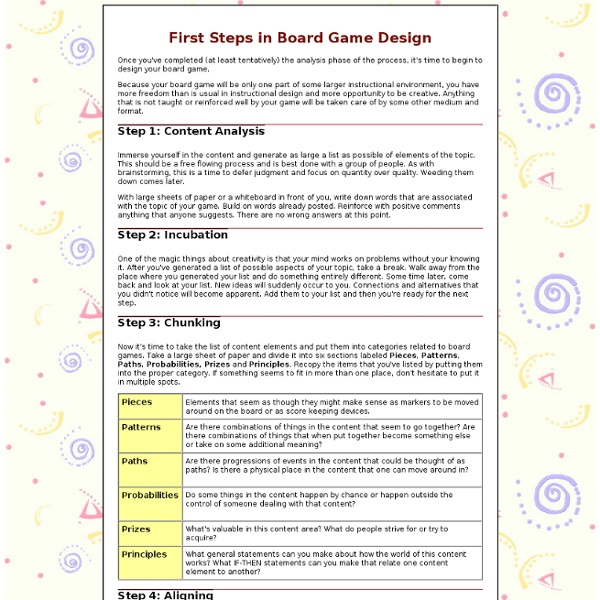 Game Design Process 101: Part II (Creative Thinking) For many people who want to be Game Designers, the most difficult thing about the process, aside from the actual work, follows soon after the initial spark of inspiration strikes. More often than not, the first mistake a budding developer makes is to get inspired and immediate start the execution of the gameâ€™s design, usually after slapping together a whole lot of hype to get other people interested in his or her project. Screenshots, like an actual plan, are optional. A great example would be GamerJoe21 taking a shower, thinking about the â€˜kick-ass war movieâ€™ he saw last night where â€˜that dude did that awesome thing with that minigunâ€™. Donâ€™t laugh, itâ€™s probably happened numerous timesâ€¦ Unfortunately, for a game to be the best it can be, there must be some amount of planning and preparation. â€œBut wait! So the question is not what your game will be about, for youâ€™ve already satisfied that in the first part of the Game Design Process, namely inspiration. Whew.

Visualizing the Creative Process As I coach new developers, I've taken to scribbling out the same useful diagram for visualizing the creative process again and again on coffee-ringed napkins. In order to limit my future abuse of culinary paper wares, I've reproduced my images in a more formal fashion in this essay. The conversation usually starts with the following statement: "Creativity is like a snake swallowing a series of tennis balls." And when confused looks inevitably result, I sketch some variant of this odd little picture: Using this as a starting point, we start chatting about joys and pitfalls of creativity.The Brainstorming PhaseFailures in brainstormingThe Culling PhaseFailures in cullingCyclingFailures in cycling The Brainstorming Phase We all start with an idea. Brainstorming starts out small and expands over time There are several activities that occur during this phase:Ideas: Generate new ideas related to your initial insight. A multitude of experiments arise during brainstorming Problems with brainstorming

Risk and Reward Deluxe « #AltDevBlogADay I recently came across a quote from Cliff Bleszinski (source forgotten) where he contemplated that he’d rather have other game designers ripping off Gears of War’s “active reload” mechanic than its cover-based shooting. Reading that, I was reminded of an observation that my friend and colleague Peter once had while we were playing Wii Tennis together. We were pretty good players, having played that game daily during our lunch break for months. And we finally understood the finesse, the genius, of the service in Wii Tennis. The service in Wii Tennis works like this: First, you waggle the Wii Remote to throw the ball into the air. Then you make a racket swing-like gesture with the remote in order to hit the ball. While the power serve is played by throwing the ball into the air and hitting it with the bat when it has reached its peak, the lulu-service needs the player to hit the ball moments before the Mii catches the ball again with his hand.

4 Powerful Game Development Tools | Gameplay Passion September 20th, 2012 When making a game, you want to : Work efficiently and quicklyEasily organize and keep track of your ideasSee your game in action as soon as possibleEasily test if the final product matches to your Game Design In this article, I present 4 powerful game development tools that you can use to achieve the 4 goals stated above. 1) Game Design document (GDD) Update 23/03/2013 : some of my ideas here about game design documents may be outdated, check this article for more up-to-date ideas. When a game is born, it comes to the world in the form of a piece of paper or a word document called Game Design Document A Game Design Document describes EVERY feature of your game in a precise, clear and detailed way. Every detail should be there, no exception. When I started game development a few years ago, I made very incomplete or no GDDs at all. By neglecting to maintain a GDD, I was off-topic most of the time. The quickest way to develop a game is to imagine it first. 2) Dev Journal

Game Design Resources DC On Using Math Not too long ago, a friend told me about an experience she had at a local game store. The topic of Privateer Press came up, and she mentioned my name in conjunction with some development topic. Much to her amusement, the guy’s response was something along the lines of: “Oh, yeah; I’ve heard of DC. He’s the guy who does math.” I guess my interest in mathematics shows through a bit in my blogs or in projects I’ve worked on, but my actual day-to-day work usually involves a whole lot more writing, editing, planning, proofing, and discussing than it involves hardcore mathematical calculations and analysis. What little math I get to indulge in on a frequent basis is pretty simple stuff, from basic computation to numerical distributions to some probabilistic and statistical analysis. There are, however, times I can really dig into the mathematics behind a particular project, and one of my current projects ideally fits the bill. The Guy who does Math, -DC

Features - Structuring Key Design Elements All games start as an idea, something like "Wouldn't it be cool to be a space marine and blow up zombies on Phobos" or "Wouldn't it be cool to be a pilot in a starfighter involved in an epic struggle to overcome the oppression of a star empire gone bad" or "Wouldn't it be cool to drive modified street cars on Tokyo streets at night." These idea sparks are often the source of long conversations between developers late into the night at the studio. Another potential starting point for a game is a licensed property; i.e., "make a RPG/RTS/action game using XXX license." (Fans may want to play that license specifically. This article discusses how to turn the structure that your business context and your game ideas provide into a game concept worthy of fleshing out into a game design document. Business Context Shapes Design, Or Does Design Shape The Business Context? Reconcile the Business Context and Game Idea Early First of all, the publisher must extend additional money to the developer. 1.

Brainstorming Description: Brainstorming is the name I have chosen to use to describe techniques aimed at generating new ideas (e.g. game concepts, features, game mechanics, play mechanics, etc.) or solving design problems (e.g. imbalances, loopholes, control schemes, etc.) through spontaneity. As a game design tool, brainstorming is not isolated to the beginning of the game design process but recurs throughout the entire process. While these techniques can sometimes seem a waste of time and non-organic, their primary advantage comes from structuring ideation and problem-solving (in a group or alone), which can save a game designer(s) a lot of time and energy. In general, brainstorming is meant to: · Escape old convictions and assumptions. · Find new and unique solutions. Use: To use brainstorming effectively, there are several questions that you should ask yourself before using it as a tool. (1) How innovative do the results need to be? Is the brainstorm about new ideas or solutions to problems? · Theme

10 Game Design Commandments « My Simple Minded World Implement these fundamental rules and your game will be fun to play. Always reward the playerNever punish the player arbitrarilyControl is kingWaiting should be avoided at all costs 4B. It’s called multiPLAYer not multiWAITERDon’t prevent players from experiencing all of your gameDon’t tack on half-baked new game modes to spice things upBe logically consistentLet players craft their own experience 8b. Let players play any point in the game at any timeDesign as if this is the first game the player has ever playedDesign as if the player has played every game in existence Explanation 1. Each minute that the player is playing your game they should feel a sense of accomplishment and progression. Good example: Call of Duty 4 COD4′s multiplayer has quickly become the standard by which other multiplayer games are judged. Bad Example: Forza 2 2. Failing a challenge/mission/task in a game is frustrating enough, don’t add even more insult and injury to the player just for trying. 3. 4. 4b. Dear God. 5.

Card Design Commandments | Hyperbole Games Post by: Grant Rodiek I have a thing for card games. I like playing them and I like designing them. Every time I try to veer away from cards to tackle another component like dice, I always end up right back with a box full of index cards and penciled scribbles. As I design card games, play card games, and give advice to other designers about their card games, I see a few patterns emerging. Text should be easy to read: Two smart individuals, Chris Farrell and Daniel Solis, have already written about this (and many topics in this post) at length. Bottom line, it should be incredibly easy for people of all ages to read the text on your cards. Use icons where possible: If you’re using a term or rule often, create an icon. Good iconography saves space on cards and immediately gives the player an idea of the card’s purpose at a glance. Sample Poor Abby proto card Sample icons I made for my prototype That’s a great amount of information to process, but luckily this is an advanced card.

4 principles for the design of game interfaces The latest issue of User Experience Magazine features a gem of an article for those looking for a very brief intro into basic heuristics for game design. "Designing Game-Based Tools for Youth" By Sarah Chu and Constance Steinkuehler reveals findings from their research into the UX of the massively popular and massively multiplayer game, World of War Craft. Their conclusions...Keep the interface simple at first. This is an excellent principle to carry over to learning interface design. Just-in-time help - The game introduces byte-sized tutorial pop-ups that appear strictly when they are needed (chunked and contextualized.) In-game chat and easy access to external resources played another strong part in moving users across the learning curve in the World of Warcraft studies. Go to the UX Magazine website to download the full article Related Posts