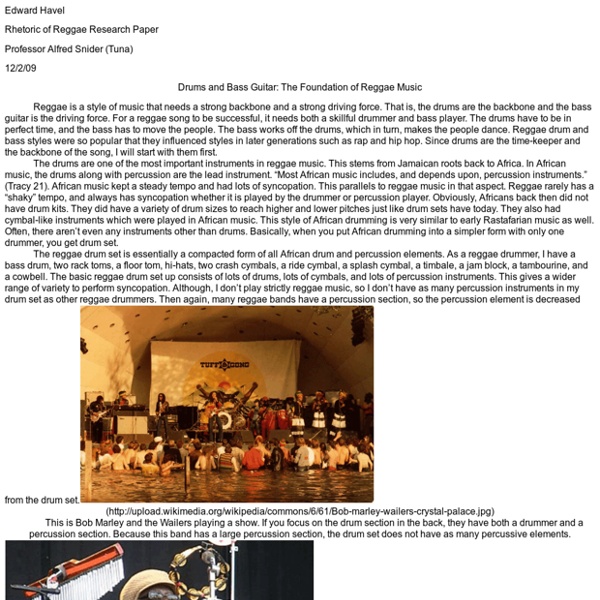 Edward Havel Rhetoric of Reggae Research Paper Professor Alfred Snider (Tuna) Drums and Bass Guitar: The Foundation of Reggae Music Reggae is a style of music that needs a strong backbone and a strong driving force. That is, the drums are the backbone and the bass guitar is the driving force. The drums are one of the most important instruments in reggae music. The reggae drum set is essentially a compacted form of all African drum and percussion elements. ( This is Bob Marley and the Wailers playing a show. “Percussionist, Uziah "Sticky" Thompson keeps Ziggy's rhythm light and danceable” ( This is an example of what a percussion player’s set up may look like. Reggae drums have fairly flexible guidelines. Another style of drumming is called Rockers invented by drum and bass duo, Sly and Robbie. If you listen to variety of reggae songs, you will realize that the drums sound more or less the same. In these “empty spaces” between the beats, there is lots of syncopation. ( (King, Foster 63) (

Native American celebration Powwow, a celebration of American Indian culture in which people from diverse indigenous nations gather for the purpose of dancing, singing, and honouring the traditions of their ancestors. The term powwow, which derives from a curing ritual, originated in one of the Algonquian nations of the Northeast Indians. During the early 1800s, traveling medicine shows selling cure-all tonics used “powwow” to describe their wares.

History of the Mariachi Mariachi and Dance It is important to remember the son-and other types of Mariachi music- is not just music to be played and sung. From the very start it was music to be danced. The traditional dance technique associated with both the son jalisciense and son jarocho is the zapateado, a distinctive type of footwork that originated in Spain. Salsa music 2008/9 Schools Wikipedia Selection. Related subjects: Musical genres, styles, eras and events Salsa music is a diverse and predominantly Spanish Caribbean genre that is popular across Latin America and among Latinos abroad. Salsa incorporates multiple styles and variations; the term can be used to describe most any form of popular Cuban-derived genre, such as chachachá and mambo. Most specifically, however, salsa refers to a particular style developed in the 1960s and '70s by Cuban and Puerto Rican immigrants to the New York City area, and stylistic descendants like 1980s salsa romantica. The style is now practiced throughout Latin America, and abroad.

Melting Pot of Music : O.C. Festival: Albert Ramon y Su Tierra Chicana, a Tex-Mex band with German and blues influences, takes its sounds to Santa Ana streets at Marketplace Christmas Celebration. - latimes Once a Texan, always a Texan, it seems. Though Albert Ramon moved to California with his family when he was 4, the music the 34-year-old plays is rooted in the soil of his native state. Call it Tex-Mex, conjunto or norteno , the style of music that Albert Ramon y Su Tierra Chicana play is a distinctly Texan hybrid, a melding of Latino border music with the button accordion and polka styles that German immigrants introduced to the area. The music's roots stretch back to the beginning of this century, but more recently it has incorporated strains of R & B and other electric styles. Its influence can be heard in the music of the Texas Tornados, whose accordionist, Flaco Jimenez, is one of norteno music's most renown innovators, as well as that of Los Lobos. Ramon's group performs Sunday at the Fiesta Marketplace Christmas Celebration on Fourth Street in downtown Santa Ana.

Mariachi by Jay W. Sharp My wife, Martha, and I discovered the music of the mariachi in a small café just off the central plaza in Monterrey, Nuevo Leon, Mexico, one rainy evening in February of 1959. We had both grown up in rural Texas, playing dinner-plate-size records that yielded scratchy renditions of the swing music of Tommy Dorsey, Harry James, Benny Goodman and Artie Shaw and the ballads of Ella Fitzgerald, Duke Ellington, Frank Sinatra, Nat “King” Cole, the Andrews Sisters and Peggy Lee. We knew the melodies and lyrics by heart.