The rise and fall of Detroit: A timeline 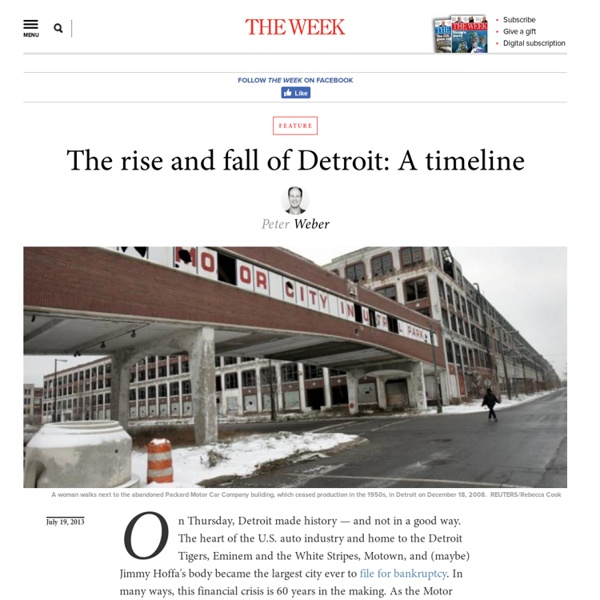 Sign Up for Our free email newsletters On Thursday, Detroit made history — and not in a good way. The heart of the U.S. auto industry and home to the Detroit Tigers, Eminem and the White Stripes, Motown, and (maybe) Jimmy Hoffa's body became the largest city ever to file for bankruptcy. In many ways, this financial crisis is 60 years in the making. As the Motor City faces an uncertain future, here's a look back at some key dates in the long, storied past of one of America's great cities: July 24, 1701Antoine de La Mothe Cadillac establishes a French settlement, Fort Ponchartrain du Détroit (the strait), along with 100 French soldiers and an equal number of Algonquins. 1760Britain wins the city from the French. 1796U.S. forces capture Detroit from the British. Feb. 1, 1802Detroit becomes a chartered city, covering about 20 acres. 1827Detroit adopts its forward-looking city motto: Speramus Meliora; Resurget Cineribus (We hope for better days; it shall rise from the ashes). 1899Ransom E.

Tech and innovation power Detroit's manufacturing revival Similar efforts are under way in Detroit to foster innovation and entrepreneurism. These include the Obama administration's manufacturing innovation institute, called Lightweight Innovations for Tomorrow (LIFT), launched in January, and the philanthropic New Economy Initiative (NEI), an economic development initiative working to build a network of support for entrepreneurs and small businesses. "We don't support entrepreneurs directly, but the ecosystem that does," explained David Egner, executive director of NEI, which has raised $135 million to fund entrepreneurs and programs like LIFT. Egner said that about 20 percent of its recipients are budding manufacturers, making things like heated motorcycle jackets, wooden pallets and carbon dioxide-based coolants for machinery. Meanwhile, Sheppard is proud to be among those working to revive Detroit's manufacturing heritage. —By Bob Woods, special to CNBC.com

Detroit firefighter shares hundreds of photos showing 'Death of the Motor City' DETROIT, MI - Shane Klug doesn't want to hear ill-informed smack talk about Detroit. The city is far from fixed, and the 40-year-old Detroit firefighter is in a unique spot to document the city's most obvious struggles; he has no reservations about showing the world the parts of Detroit that haven't been touched by redevelopment, but those who aren't from the city are better off keeping their mouths shut, he thinks. "Detroit's like your sibling, like your crazy sister, and you know she's crazy, but no one else better say that about her," Klug said over breakfast at Zeff's Coney Island in Eastern Market. Klug has been fighting fires -- countless fires -- since 2002 in Detroit, a city that's fascinated him since the first time he drove through it with his dad in the '80s. "I'd never seen ruins like this," he said. View full sizeDetroit fire fighter Shane Klug started an Instagram account in 2012, focussing mainly on Detroit's blighted and abandoned buildings. He only wants to tell a story.

Fires burn across Detroit as high winds knock down power lines By the CNN Wire Staff September 8, 2010 7:34 a.m. EDT High winds spread fires in Detroit The fire department responded to 140 calls for wires downFire crews from Dearborn, Warren and Harper Woods assistedHigh winds are believed to have knocked down power lines Are you there? (CNN) -- Firefighters in Detroit, Michigan, grappled with 85 fires in a four-hour period Tuesday night, officials said. "A lot of these fires were due to high winds and downed wires," said Karen Dumas, a city spokeswoman. There were no reports of deaths or injuries, she said. "We had winds from 30-50 mph and have a number of downed power wires," said Detroit Fire Commissioner James Mack Jr. Video: Dozens of homes burned in Detroit Video: Police: Someone setting fires? Mack said that between 8 a.m. and 5:30 p.m. the fire department responded to 140 calls for wires down before the evening outbreak. Detroit firefighters received assistance from fire departments in the neighboring towns of Warren, Dearborn and Harper Woods.

Detroit Fires: Nearly 100 Homes Burned By Wind-Whipped Flames Detroit firefighters say downed electrical wires and high winds are responsible for a sudden rash of fires that burned dozens of homes on the city’s east side Tuesday afternoon. No injuries or fatalities were reported, but the flames burned 85 homes, including 18 that were vacant, the Detroit Free Press reported. As many as 50,000 people were left without electricity. Wind gusts of up to 50 m.p.h. were responsible for spreading the flames, according to the National Weather Service. One resident, Louvenia Wallace, 31, told the Free Press she and her children fled their neighborhood and had to stay at a nearby home in a safe area.