Teaching Men to Be Emotionally Honest 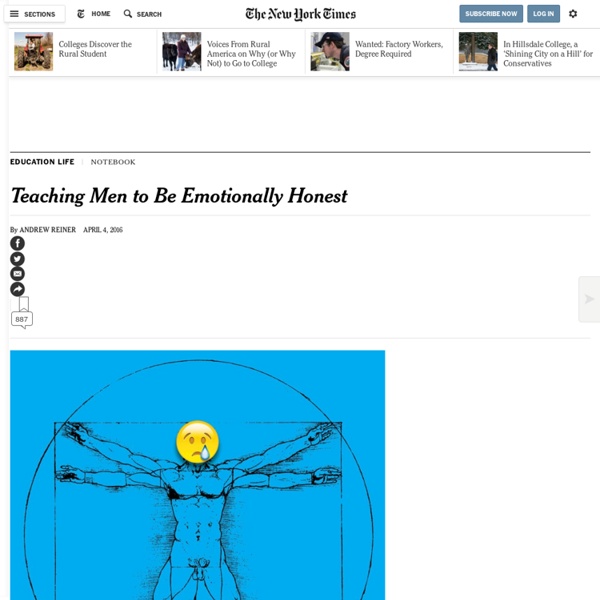 In many ways, the young men who take my seminar — typically, 20 percent of the class — mirror national trends. Based on their grades and writing assignments, it’s clear that they spend less time on homework than female students do; and while every bit as intelligent, they earn lower grades with studied indifference. When I asked one of my male students why he didn’t openly fret about grades the way so many women do, he said: “Nothing’s worse for a guy than looking like a Try Hard.” In a report based on the 2013 book “The Rise of Women: The Growing Gender Gap in Education and What It Means for American Schools,” the sociologists Thomas A. DiPrete and Claudia Buchmann observe: “Boys’ underperformance in school has more to do with society’s norms about masculinity than with anatomy, hormones or brain structure. It should come as no surprise that college enrollment rates for women have outstripped men’s. Dr. As Dr. Photo But we socialize this vulnerability out of them. Related:  Feminism • karlo

The idea that gender is a spectrum is a new gender prison | Aeon Essays What is gender? This is a question that cuts to the very heart of feminist theory and practice, and is pivotal to current debates in social justice activism about class, identity and privilege. In everyday conversation, the word ‘gender’ is a synonym for what would more accurately be referred to as ‘sex’. Perhaps due to a vague squeamishness about uttering a word that also describes sexual intercourse, the word ‘gender’ is now euphemistically used to refer to the biological fact of whether a person is female or male, saving us all the mild embarrassment of having to invoke, however indirectly, the bodily organs and processes that this bifurcation entails. The word ‘gender’ originally had a purely grammatical meaning in languages that classify their nouns as masculine, feminine or neuter. At least, that is the role that the word gender traditionally performed in feminist theory. to call oneself non-binary is in fact to create a new false binary

Camille Paglia: How Bill Clinton is like Bill Cosby Camille Paglia, the political and cultural critic, has been a brave and brilliant provocateur on Salon for almost 20 years now. Paglia seemed to be on the winning side of the wars over feminism and political correctness in the 1990s, but recently those battles have been reopened. Suddenly we’re talking again and in very different ways about sexual culture on campus. Comedians like Jerry Seinfeld and Bill Maher talk about the return of a stifling political correctness. There were so many stories that we wanted Paglia’s take on: Bill Cosby, Donald Trump, the state of the Democratic Party. Over the next two days, she’ll hold forth on the GOP presidential field in devastating ways, and offer surprising thoughts on how she thinks Clinton vs Sanders will end. The banner on the Drudge Report this morning is that Kathleen Willey is starting a site to collect harassment claims against Bill Clinton. I was enraged! A cigar and the intern is certainly the opposite of sophisticated. Absolutely!

30 Most Important Classroom Procedures | Squarehead Teachers The key to getting your classroom to run smoothly and minimize behavior issues is to establish procedures and routines. This takes significant work and practice in the beginning but is well worth the effort! The following procedures are key to a successful teaching experience: Beginning the day — Enter the room politely; put away your backpack, lunch, and coat; turn in your homework; sit at your desk and read alone or do before-school work silently. Classroom helpers; learning a classroom job — If you get a job on Monday, see the person who did the job last week during silent reading time, ask him or her for the job description card, and have him or her help you on the first day. Classroom library — When I am not teaching the whole group, you may check out a book. End of the day — Clean off your desk; leave out your work notebook; pick up any trash within three feet of your desk; stack your chair; collect your mail; wait quietly to be dismissed. Like what you see? Like this: Related

What's behind the urge to uncover an 'authentic self'? | Aeon Essays Every Tuesday on Instagram, millions of users, mostly in their teens to their early 30s, upload an image for #transformationtuesday. On one side of the shot, there’s a selfie of a young man, topless or in underwear, his body slim, pale and unflatteringly lit, phone in hand before a mirror; or a young woman, similarly undressed, lumpy, undefined, slouching. In the second half of the frame, it’s the same body, but changed, enhanced. The young man is now tanned, his pectorals are bigger, his biceps more defined, the filter enhancing the contours of his abdominals. The young woman, in contrast, is smaller and more svelte, arching her back as she positions her legs just so. The mainstream media views this sort of thing as proof that young people are turning into self-absorbed narcissists. The metamorphoses on show for #transformationtuesday are invariably bodily ones. A fixation with ‘the makeover’ has been present in popular culture for decades. Syndicate this Essay

10 Ways To Sabotage Your Classroom Management By Jennifer Gonzalez You know the basics: Establish clear rules and consequences, be consistent, keep students engaged. But even with all that in place, the small things you do could be wreaking havoc on your whole system. Here are some habits you might have developed that are messing with your classroom management, along with more effective alternatives. 1. Smiling at the Wrong Times This was a big problem for me. Alternative: Make a conscious effort to hold a neutral, “on-task” facial expression when you need your class to be focused. 2. Addressing student misbehavior in a public way risks embarrassing the student, and if she is prone to being oppositional, she’s likely to talk back and dig herself into a deeper hole. Alternative: Whenever possible, address off-task behavior in private. Others just speak in a quiet voice by the student’s desk or call the student up to their own. 3. So many behavior problems start with students simply not understanding what they are supposed to do. 4. 5.

theconversation That males are naturally promiscuous while females are coy and choosy is a widely held belief. Even many scientists – including some biologists, psychologists and anthropologists – tout this notion when interviewed by the media about almost any aspect of male-female differences, including in human beings. In fact, certain human behaviors such as rape, marital infidelity and some forms of domestic abuse have been portrayed as adaptive traits that evolved because males are promiscuous while females are sexually reluctant. These ideas, which are pervasive in Western culture, also have served as the cornerstone for the evolutionary study of sexual selection, sex differences and sex roles among animals. Only recently have some scientists – fortified with modern data – begun to question their underlying assumptions and the resulting paradigm. It all comes down to sperm and eggs? The problem is, modern data simply don’t support most of Bateman’s and Trivers’ predictions and assumptions.

5 Common Mistakes that Will Lead to an Out-of-Control Classroom Guest post by Linda Kardamis at Teach 4 the Heart My first year teaching was not very pretty. I thought I knew how to manage a class, but I made some critical errors that left me in the situation every teacher dreads – standing in front of an out-of-control classroom. While I certainly don’t want to go back and repeat that first year, I’m very thankful for the lessons I learned. Effective classroom management can be challenging, but the key is to keep learning and growing. 5 Common Classroom Management Mistakes 1. 2. 3. 4. 5. What other mistakes have you made and how did you correct them?