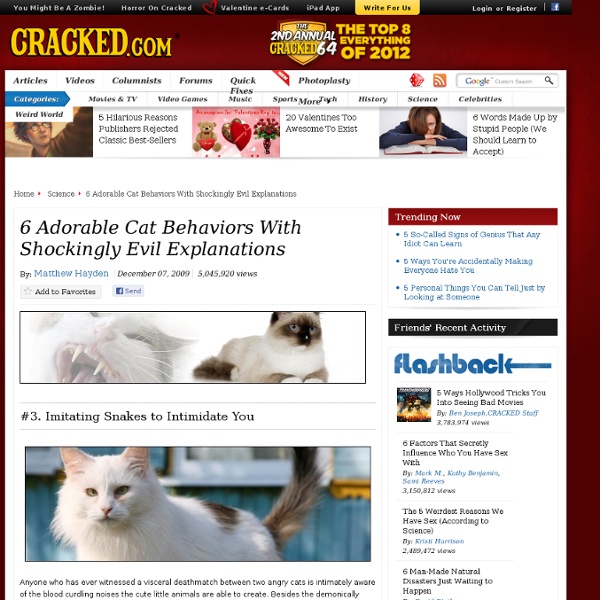 Imitating Snakes to Intimidate You Anyone who has ever witnessed a visceral deathmatch between two angry cats is intimately aware of the blood curdling noises the cute little animals are able to create. Besides the demonically drawn out "Mrrrroww" that emanates from the very bowels of Hell itself, when a cat feels threatened, they always turn to the tried and true hiss. Lots of animals make this noise when in the throes of battle, but why? It turns out that when a cat pushes its ears down, bares its fangs, squints its slivered eyes and hisses, it closely resembles another animal that is naturally feared and avoided by most predators: the snake. Cooobraaaa!! Cats, like many other animals, from butterflies to birds, instinctively employ the art of mimicry in order to best defend themselves from attack. So the next time you piss off your kitty and it hisses at you, it's not just showing its disapproval. Obsessively Getting Rid of the Stench of Humans Hmmm... that's strange. Cats love murder.

5 Retarded Superstitions (With Logical Explanations) This Irish symbol is possibly the most well-known good luck charm in the world, which is somewhat odd considering the whole "luck of the Irish" thing is a bit of an oxymoron (historians say it originates from the fact that the world just seems luckier when you're inebriated). Where the Hell Did This Come From? The simplest reason the four-leaf clover is considered lucky is because they're so rare, with only around one in 10,000 clovers sporting four leaflets. "Just a few more clovers and I'll be back on top!" The use of clover as a lucky charm dates back to pre-Christian times when Druidism was the religion of the day in Ireland. Clover is also edible and, in fact, quite nutritious. Now with a chocolate version, for those who don't have the time to wait to develop diabetes. Millions of people each year buy rabbit's feet keychains and such hoping they'll bring them good luck and prosperity. Ever wonder how rabbits wound up among the Easter decorations?

The Sand Cat – Desert Cat Extraordinaire Don’t be fooled by the off the scale cuteness quotient. This is the Sand Cat – or Felis margarita, a little known species of desert cat. In the wild it lives in areas that are too hot and dry for any other cat- the deserts of Africa and Asia, including the Sahara. It is the only desert species of cat known to us. As such, this cat is one tough cookie. It also lives in the Arabian desert and those of Iran and Pakistan, yet despite being so widespread it was not described by a European until 1858. He named it Felis margarita after Jean August Margueritte. To an extent the sand cat could be mistaken for a domestic cat but there are differences, noticeably the very broad head. Likewise with their height – they usually grow to about six centimeters taller than the domestic cat. One difference from the cats that we know which is difficult to see in these pictures is the fur that the cats have between their toes. As they mostly eat rodents, they do a lot of digging.

Favourite Cat Quotes through Time Man has always been intrigued and fascinated with the cat so it's not surprising that there are so many cat-related quotes throughout time. This is a selection of some of my favourite quotes that I have collected over the years that I know all feline lovers will enjoy. This page will be updated with new quotes from time to time so please feel free to come back again soon! "In the beginning, God created man, but seeing him so feeble, He gave him the cat. "A home without a cat- and a well-fed, well-petted and properly revered cat- may be a perfect home, perhaps, but how can it prove title?" "If animals could speak the dog would be a a blundering outspoken fellow, but the cat would have the rare grace of never saying a word too much "A cat is more intelligent than people believe, and can be taught any crime." "I simply can't resist a cat, particularly a purring one. "Of all God's creatures there is only one that cannot be made the slave of the leash. "Dogs come when they're called.

37 Beautiful Cat Pictures Advertisement Cat photography, for most people, is a way to remember their pets’ funny actions and playing around. But actually, cat pictures require more talent to move to the next level and become professional cat photographs. When taking cat pictures, you need a special talent in order to choose the right moment for taking the shot, especially because you are taking photos of a continuously moving and active creature that you cannot control. In order to succeed in cat photography and predict the next move of your cat, you will need some practice and a good understanding of animal behavior. So, before you start taking cat pictures, you may need to consider the following tips to help you get professional cat images of your favorite pet: You need to keep your cat in the photography location. On the other hand, try to avoid digital camera flash, because it will disturb the cats when shooting them. Impressive cat pictures Funny cat by Govorit-vsluh She is…ONLY ONE CAT by MyosotisPL

Poor Stupid Cat This is my cat. Her name is Lola, and she's not all there. When Lola was a kitten, she somehow got outside and drank antifreeze. She was never quite right after that. I decided to keep her indoors until she was an adult, because I didn't trust her to take care of herself outside. A couple years later, I decided to see if I could expand her horizons beyond the confines of my house. That was the last time I let her outdoors. Like a lot of cats, Lola liked to sleep in the sink. As time progressed, Lola developed a sort of guard dog mentality, growling quietly at company and stalking them as they moved from room to room. Back when she was a kitten, unfettered by the sweet allure of engine coolant, Lola's hunter instincts served her well. She still does this from time to time, always suddenly and without warning. She's pretty much a worthless cat, and it sort of bums me out. Even then, I have to hold her right in front of the moth before she'll grab at it.

bengalkittens Texas Star Bengal Kittens F1's, F2's, F3's, and SBT Bengal Kittens are here, take a minute to look at the available kittens and call if you are seriously interested. Posted April 13, 2014 You can see more Photos at F3 Bengal Litter Sire: TexasStar Kaleidoscope SBT Dam: Dreampaws Dasha Cherry of TexasStar F2 Litter--Date of Birth: April 6, 2014 # 1 F3 Bengal Brown Black Spotted Male --Under evaluation Name: Pending Will post photos soon Sire: TexasStar Henry Dam: Bray Litter--Date of Birth: March/21/2014 # 1 Brown Black Spotted Male -- On Hold as pet $2,800. DOB: March 21, 2014 Name: Tanner This Boy is Beautiful! # 2 Black Silver Spotted Male -- Sold pet $2,800. Name: Clark This is Clark! where born in the early morning and human Mom was not there. noon and found all 4 kittens all stuck together! balled up, they where all attached tummy to tummy. # 3 Black Silver Marble Male -- Available as a pet $1,800. Name: Cale Name: Addilyn We will be posting pictures of the new