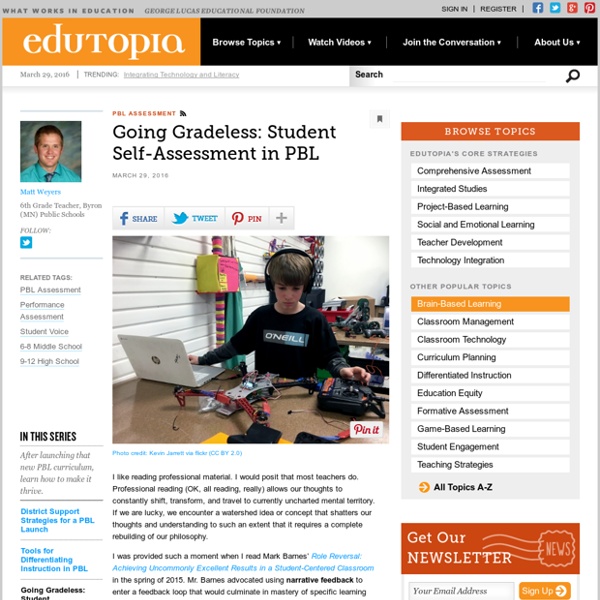 I like reading professional material. I would posit that most teachers do. Professional reading (OK, all reading, really) allows our thoughts to constantly shift, transform, and travel to currently uncharted mental territory. If we are lucky, we encounter a watershed idea or concept that shatters our thoughts and understanding to such an extent that it requires a complete rebuilding of our philosophy. I was provided such a moment when I read Mark Barnes’ Role Reversal: Achieving Uncommonly Excellent Results in a Student-Centered Classroom in the spring of 2015. Mr. My Goal It was my intention to simultaneously promote mastery learning as well as increase students' ability to metacognitively assess their work against a given set of standards. Remove grades from the daily equation. My Plan I knew that I needed to maintain accountability to various stakeholders in this process -- the students, their families, and the administration. The Results Related:  Project Based Learning • Assessment and Testing • Assessments

5 Keys to Rigorous Project-Based Learning Voiceover: How will today’s children function in a dangerous world? What means will they use to carve the future? Will they be equipped to find the answers to tomorrow’s problems? Teacher: When you think about traditional learning you think of a student sitting in a classroom and being talked at. Teacher: Now I imagine a lot of you are still thinking... Teacher: They are supposed to be a sponge. Peggy Ertmer: So there are a lot of different ways to approach PBL, a lot of different ways to implement it, but really it all boils down to five essential keys: real-world connection, core to learning, structured collaboration, student driven, and multifaceted assessment. Student: One of the problems in the ocean is that with the higher amount of CO2 calcifying organisms are decreasing and we’re testing to see how well life in the ocean lives without calcifying organisms. Student: --four by eight feet. Peggy Ertmer: So the second commonality is the PBL unit provides academic rigor. Student: Yes.

Cloud-based assessment platform is free for educators Creating, sharing, delivering and grading of tests, along with analysis of results, happens in real-time in one platform Being able to easily create and deliver quizzes and tests to students in the classroom, and then put the results of those tests to work immediately to help improve student learning was the motivation behind Apperson, Inc. making its Evo Academics assessment platform available free-of-charge to educators everywhere. The Free Teacher Edition, which was designed by teachers, allows educators to create online quizzes and tests, share tests with colleagues, build and store rubrics, assign tests to students through a student portal, access assessment results in real time, and generate student proficiency reports for the standards assessed. Evo Academics Free Teacher Edition allows educators to use one platform for both assessment creation and online testing. It supports several question types, including multiple choice, true/false, short answers and essays.

These students are using PBL to define their own learning By Ashleigh Schultz April 21st, 2015 Project-based learning enhances and accelerates curriculum in this classroom If you’re doing it right, most project-based learning will hit every area of the curriculum, whether it’s social studies, math, reading, or even technology. Any part of the curriculum can shine whenever kids are taking a hands-on approach to learning, because they’re not just sitting at a desk listening to you preach it. They’re the ones doing it themselves, which means they’re kind of assuming that role of the teacher. For much of my 13 years as an educator, I was in a traditional classroom. I have some guidelines that I set up at the beginning of each unit, but I try to let the students take control and steer it in the direction they want to go in. My students wanted to make their own inventions, but they weren’t working in isolation—most of it was teamwork. Next page: How to manage the PBL classroom

New test requires North Dakota students to prove civics proficiency Last year, North Dakota became the second state in the nation to adopt the requirement, which is based on the Immigration and Naturalization test covering questions about government and history. Eighth- and 11th-grade students are taking the online test for the first time at the end of this month. Students who graduate next year must achieve 60 percent or greater proficiency on the test to pass, while those who graduate in 2018 and each subsequent year must achieve 70 percent proficiency. Grand Forks students may have been the first in the state to experience the test. In 2014, district social studies teachers heard about the civics test bill from Superintendent Larry Nybladh, who attended Legislative committee hearings while the bill was being discussed. That year, they developed a 25-question pretest. This gave school administrators confidence students will do well on the real test this year, he said. They were happy the subject matter was getting its due, he said. Testing, time, work U.S.

Why you should stop testing and start assessing By Torrey Trust April 20th, 2015 Both the ISTE Standards for Teachers (2008) and CAST’s Universal Design for Learning principles recommend allowing students to express their ideas and knowledge in a variety of ways. Yet, too often, students are asked to sit at a desk for hours on end to take the exact same multiple choice, short answer, or essay test to demonstrate what they learned. In the TED Talk “The Myth of the Average,” Todd Rose made an invaluable point: “Even though we have one of the most diverse countries in the history of the world, and even though it’s the 21st century, we still design our learning environments like textbooks for the average student.” According to Todd, when you design for the average (e.g., one-size-fits-all tests), you design for no one. With widespread access to the internet and thousands of free online tools, students can express their knowledge and demonstrate their skills in a variety of ways.

untitled Now it is possible for teachers to be in two, three or even six places at once. Increase confidence in real-time assessments, maximize quality teacher time with students, and foster effective student collaboration and sharing. Learn More Education researchers blast Common Core standards, urge ban on high-stakes tests Stacey Jacobson-Francis works on math homework with her 6-year-old daughter Luci on May 14, 2014, at their home in Berkeley, Calif. (AP) More than 100 education researchers in California have joined in a call for an end to high-stakes testing, saying that there is no “compelling” evidence to support the idea that the Common Core State Standards will improve the quality of education for children or close the achievement gap, and that Common Core assessments lack “validity, reliability and fairness.” The California Alliance of Researchers for Equity in Education, a statewide collaborative of university-based education researchers, recently released a research brief (see in full below below) describing concerns with the Common Core standards and the assessments being given to millions of students in California and other states around the country this spring. [What the Common Core tests are — and aren’t] [Donald Trump is wrong about Common Core — but he’s not the only candidate who is]

Virginia students will take fewer Standards of Learning tests next year Spring is a busy time for third-grade teacher Marlon Mohammed, who is preparing his students to take the Virginia Standards of Learning tests for the first time. In addition to reviewing four years of material in reading, math, social studies and science for the cumulative state tests, he also has to teach them how to take the exams. That means familiarizing 8-year-olds and 9-year-olds at Discovery Elementary School in Ashburn with multiple-choice questions and conditioning them to sit through the hour-long tests. “I have never understood why in third grade, our youngest SOL test takers are taking four tests,” Mohammed said. “It seems like a lot.” That is poised to change next year. The bill, which had overwhelming support from lawmakers and statewide education groups, represents a significant departure from the test-based accountability system the state has built up over two decades. The number of end-of-course SOL tests in high school will remain at 12. Gov.

What Is Design Thinking? | Createdu WHAT IS DESIGN THINKING? Design Thinking is a practical tool for integrating 21st century skills and an innovator’s mindset into the classroom, school and workplace. It demonstrates the direct connection between content students learn in class and what the world beyond their school will ask of them. The design process is taught through problem scenarios called “design challenges,” which can range from redesigning a school backpack so that it better meets the need of an individual student, to answering the question, “How might we improve the physical and emotional safety of youth at our school?” The process has five stages, which can occur simultaneously and can be repeated. generally the starting pointencourages students to ask great questionslearn about the audience for whom you are designingcollect examples of other attempts to solve the same issueidentify existing obstacles Define Ideate Prototype Test/Feedback HOW IS IT DIFFERENT FROM TRADITIONAL EDUCATION? WHY USE DESIGN THINKING?