How to Properly Meditate Quotes by Gurus and Sages [Article] 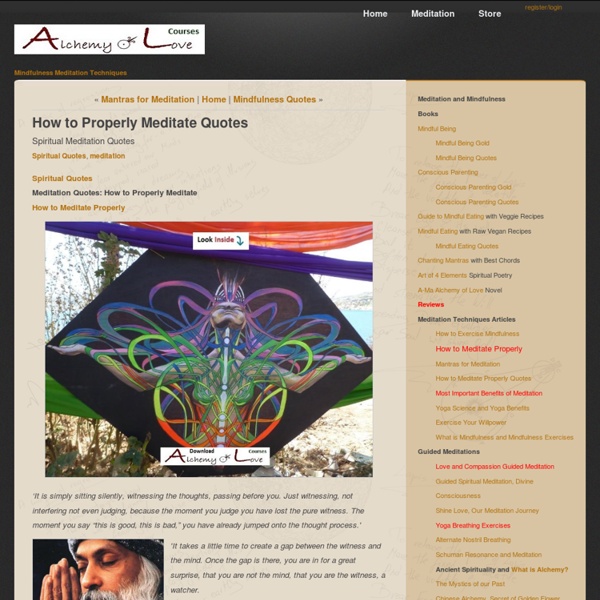 Mandala Meaning from Aztecs to Jung [Article] Mandala Meaning What is the Meaning of Mandala Spiritual Development, Alchemy of Love, Symbols and Signs, meditation Mandala Meaning Mandala as a Holy Circle Mandala is a circle that represents Wholeness, that represents Divine, our relation to the Infinite, the world within our body and mind and the world outside. The mandala is used in many spiritual traditions all around the world. Mandala Meaning with Native American Indians Native American Indians have medicine wheels and sand mandalas. The Medicine Wheel or the Sacred Hoop, is a Healing Wheel. Mandala Meaning and Aztecs Circular Aztec calendar is in a form of a Mandala The sacred calendar of the Aztecs of Mexico consisted of a 365-day calendar cycle and a 260-day ritual cycle. The Aztec sacred calendar called 'xiuhpohualli' divides the days and rituals between the Gods. The Aztec calendar can be imagined as two wheels connected to each other. Each day-sign respects a God or an Elemental Force, the provider of the Life Energy for that day.

What is your tree sign? Spiritual Meanings from an Ancient Slav Zodiac [Article] What is Your Tree Sign Ancient Slavic Astrology Spiritual Development, Alchemy of Love, Symbols and Signs What is your Tree Sign Tree Magic Trees were respected since the beginning of time. Druids were priests of an ancient Celtic religious order. The Pagans used the Yew tree as the focus of their worship. The Greeks and Romans decorated their dwellings with ivy, taking evergreen plants into their houses acknowledging their magical qualities. The Christmas tree is a symbol adopted by Christian tradition, referring to the salvation that Jesus brought to the world by his birth. Ancient Slav Zodiac According to the Ancient Slav Zodiac we all have our Tree Signs. Oak Tree: 21.March An Oak Tree is respected as a sacred tree amongst many cultures. If you are born under the protection of this tree you are born to be a leader, a protector, and a guide. Hazelnut tree 22. - 30. A magic fruit tree. A lot of energy follows the people born under the protection of the hazelnut tree. Walnut tree. 21. - 30.

Spiritual Symbolism of Spiral and its Cosmic Rhythms [Article] Seashell Spirit Wish Spiritual Symbolism of Spiral and its Cosmic Rhythms Spiritual Poems, Spiritual Quotes, Symbols and Signs Spiral Symbolism Spiral is mystical, spiral is magical, spiral is an ancient symbol of Divine. Embedded within the Universal pattern of Galaxies and also engraved within each tiny shell, it fascinated many from the beginning of times. The spiral is within the strands of our DNA, flower petals, the branching of trees, a spiral shell, and the shape of our galaxy. Spiral and Golden Ratio The Golden Ratio, roughly equal to 1.618, was first formally introduced by Pythagoras. The Golden ratio, the Fibonacci sequence runs 1, 1, 2, 3, 5, 8, 13... The pattern can be found in the placement of the leaves on most plants, in a pine cone, in the shape of our DNA, in distant galaxies reflecting the magic interconnectedness of our micro and macro cosmos. Leonardo da Vinci's 'Vitruvian Man' (1487) illustrates the Golden ratio. Ancient Spiral and its Cosmic Symbolism Spiral Quotes

Meditation Symbols and their Meaning [Article] Meditation Symbols Symbols for Meditation and their Meanings Symbols and Signs, meditation Meditation Spiritual and Occult Symbols During the spiritual training a meditator can use visual images, mantras or words, or feelings and sensations (such as compassion, love, peace) as a focus of a meditation. Thousands of years of spiritual practice short-listed a number of sacred occult symbols of meditation that affect the soul in a special way when it withdraws all attention from the outer world, and focusses on an image, mantra or a feeling. How to Meditate on Symbols During the Meditation on Symbols, one focus on a symbol allowing different ideas and impressions into the mind. During the meditation, helped by Rythmical Breathing, we silence the mind and allow our soul to become one with the symbol within the silence. Meditation Symbols in Buddhism Buddha Eyes or Wisdom Eyes According to Buddhism all beings have the Buddha nature. Dharma Wheel Meditation on Buddha Hindu Meditations and Yantras

Mantras for Meditation [Article] Chanting Mantras, meditation Mantras for Meditation Magic of Mantras Singing mantras is an ancient spiritual practice of singing to God, repeating vibrational sounds and words. Singing words of mantras, prayers or devotional songs we become pure love and joy. Singing mantras that have a meaning of infinite love, or Cosmic ideation, we shift our focus into Cosmic, into Universal, into Divine and start to resonate with peace and contentment. Mantras and Meditation within Various Spiritual Practices The word meditation comes from ‘meditari’ (Latin), meaning ‘to concentrate’. Buddhism Meditation and Mantras Buddhists pursue meditation as a spiritual tool within their path toward Enlightenment and Nirvana Buddhist meditation techniques include breath meditation, meditations for developing mindfulness and concentration. Buddhism Mantra Singing Singing mantras is a major part of Buddhist meditative practices. Christian Meditation Christianity and Signing Devotional Songs Hinduist Meditation Gayatri Mantra