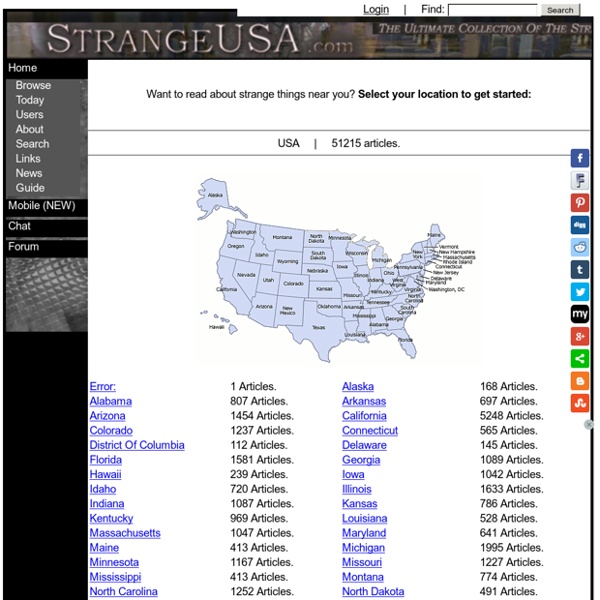 Want to read about strange things near you? Select your location to get started: USA | 51374 articles. Canada | 1994 articles. Australia | 90 articles. United Kingdom | 24 articles.

6 Real Islands Way More Terrifying Than The One On 'Lost' Summer's right around the corner, and it's time to pick your next vacation spot. Now, we know the problem you're facing: You want a nice island paradise, but you also want to experience horrors beyond comprehension, and maybe you even want to die on your trip. Well, we've got some great islands for you...

The Mysterious Plain of Jars Often referred to as â€œan Asian version of Stonehengeâ€, the Plain of Jars is one of the most enigmatic sights on Earth. Shrouded in mystery and myth, this ancient place has fascinated archeologists and scientists ever since its discovery. [Photo Credits] Thousands of giant stone jars scattered around the Xieng Khouang plain, in Laos form one of the most bizarre archeological collections in history. Although it has been determined they are over 2000 years old, no one has yet been able to determine who built them and for what purpose. Made of sedimentary rock, like sandstone or granite, and calcified coral, the jars weigh up to 13 tons and are between 1 and 3 meters high.

How to Make Friendship Bracelets - in 7 Easy Steps Anyone can learn how to make friendship bracelets with beautiful intricate patterns. Let me show you how, with easy step by step instructions. Which design would you like to make? Average Faces From Around The World Added on Feb 08, 2011 / Category : StrangeNews / 228 Comments Finding the average face of people across the world was a tough job but someone had to do it. This guy basically takes a thousands and thousands images of everyday people from any city and the software makes an 'average' of the people, giving one final portrait.

The 6 Creepiest Places on Earth Remember when we said Aokigahara was the Niagara falls of suicide? Well, for centuries the abbot in the small Czech town of Sedlec has been the Niagara Falls for dead people, regardless of cause of death. Ever since someone sprinkled soil from the Holy Land on the local cemetery in the 13th century, people from all over Europe started demanding to be buried there and the Sedlec graveyard kept growing until 1870, when the priests decided to finally do something about all those surplus bones lying around. Secret Teachings of All Ages Index For once, a book which really lives up to its title. Hall self-published this massive tome in 1928, consisting of about 200 legal-sized pages in 8 point type; it is literally his magnum opus. Each of the nearly 50 chapters is so dense with information that it is the equivalent of an entire short book. If you read this book in its entirety you will be in a good position to dive into subjects such as the Qabbala, Alchemy, Tarot, Ceremonial Magic, Neo-Platonic Philosophy, Mystery Religions, and the theory of Rosicrucianism and Freemasonry.

U.S. MAY MOVE BACK IN WITH PARENTS  WASHINGTON, D.C. (SatireWire.com) – Nearly 235 years after moving out in a massive row, the United States has asked to move back in with Britain “temporarily,” until it can get out of debt and back on its feet. A hopeful President Obama brings a suitcase with some of America's things to Buckingham Palace. The former colony, which is $14 trillion in the red, “just needs to retrench” following a few bad years and hopes living with its parents will help it save up some money to get a new start. Eyes body language Techniques > Use of body language > Parts-of-the-body language > Eyes body language Up | Down | Sideways | Gazing | Glancing | Eye contact | Staring | Squinting | Blinking | Winking | Closing | Damp | Tears | Pupil size | Rubbing | See also The eyes are often called, with some justification, 'the windows of the soul' as they can send many different non-verbal signals. For reading body language this is quite useful as looking at people's eyes are a normal part of communication (whilst gazing at other parts of the body can be seen as rather rude).

6 Amazingly Intelligent Animals (That Will Creep You Out) Animals may be extremely well-organized and insanely ballsy, but we'll always have one giant advantage over them: our intelligence. Also, cars and rocket launchers and such. But thinking is what makes us human, and thinking means we'll always be the ruling species on this planet, because the rest of those guys are really stupid. Well ... not all of them.

Pumapunku Coordinates: An example of high-precision small holes Stone blocks at Pumapunku Pumapunku or Puma Punku (Aymara and Quechua puma cougar, puma, punku door, hispanicized Puma Puncu) is part of a large temple complex or monument group that is part of the Tiwanaku Site near Tiwanaku, Bolivia. Tiwanaku is significant in Inca traditions because it is believed to be the site where the world was created.[1] In Aymara, Puma Punku's name means "The Door of the Puma".