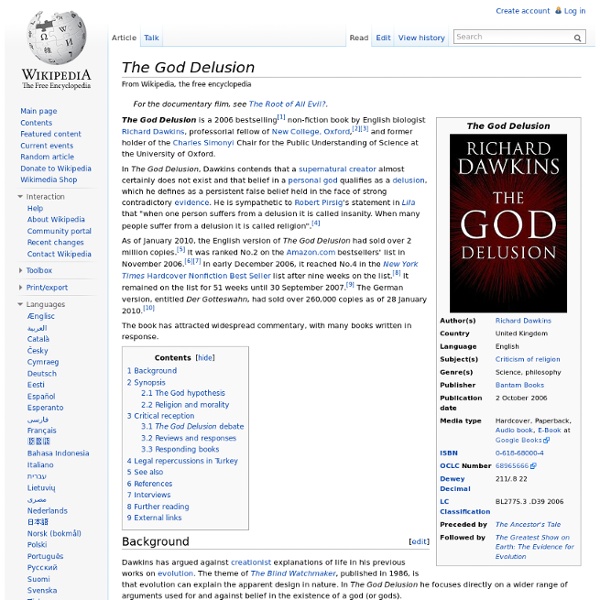 The God Delusion is a 2006 best-selling,[1] non-fiction book by English biologist Richard Dawkins, professorial fellow of New College, Oxford,[2][3] and former holder of the Charles Simonyi Chair for the Public Understanding of Science at the University of Oxford. In The God Delusion, Dawkins contends that a supernatural creator almost certainly does not exist and that belief in a personal god qualifies as a delusion, which he defines as a persistent false belief held in the face of strong contradictory evidence. He is sympathetic to Robert Pirsig's statement in Lila that "when one person suffers from a delusion it is called insanity. When many people suffer from a delusion it is called religion".[4] The book has attracted widespread commentary, with many books written in response. Background[edit] Dawkins has argued against creationist explanations of life in his previous works on evolution. Synopsis[edit] Dawkins writes that The God Delusion contains four "consciousness-raising" messages:

Richard Dawkins on The Late Late Show The Blog | Richard Dawkins: Why There Almost Certainly Is No God | The Huffington Post America, founded in secularism as a beacon of eighteenth century enlightenment, is becoming the victim of religious politics, a circumstance that would have horrified the Founding Fathers. The political ascendancy today values embryonic cells over adult people. It obsesses about gay marriage, ahead of genuinely important issues that actually make a difference to the world. It gains crucial electoral support from a religious constituency whose grip on reality is so tenuous that they expect to be 'raptured' up to heaven, leaving their clothes as empty as their minds. More extreme specimens actually long for a world war, which they identify as the 'Armageddon' that is to presage the Second Coming. Does Bush check the Rapture Index daily, as Reagan did his stars? My scientific colleagues have additional reasons to declare emergency. Scientists divide into two schools of thought over the best tactics with which to face the threat. Either Jesus had a father or he didn't. That's an argument?

Manufacturing belief | Salon Books In Lewis Carroll’s “Through the Looking Glass,” Alice tells the White Queen that she cannot believe in impossible things. But the Queen says Alice simply hasn’t had enough practice. “When I was your age, I always did it for half-an-hour a day. Why, sometimes I’ve believed as many as six impossible things before breakfast.” That human penchant for belief — or perhaps gullibility — is what inspired biologist Lewis Wolpert to write a book about the evolutionary origins of belief called “Six Impossible Things Before Breakfast.” Wolpert is an eminent developmental biologist at University College London. He has a theory for why religion first took root. Wolpert sees human credulity all around him — not just religious faith but all sorts of modern superstitions. There’s no doubt that Wolpert is a provocateur, but unlike some other prominent atheists, he doesn’t come across as a bitter enemy of religion. Can you explain the “belief engine” in the human brain? Precisely. Exactly. Yes, exactly.

Portland Monthly Magazine / Arts & Entertainment / Home / Detail Hear the full audio interview: Christopher Hitchens’s 2007 book God Is Not Great: How Religion Poisons Everything has made him arguably the nation’s most notorious atheist. Already renowned as a political columnist for Vanity Fair, Slate, and other magazines and known for his frequent punditry on the political TV circuit, Hitchens’s barbed manifesto against religion has earned him debates across the country, often with the very fundamentalist believers his book attacks. But as a precursor to his upcoming January 5 appearance at the Arlene Schnitzer Concert Hall, Portland Monthly invited Hitchens to an encounter more befitting the Rose City: a conversation with a liberal believer—Marilyn Sewell, the recently retired minister of the First Unitarian Church of Portland. Marilyn Sewell: Your book, God Is Not Great is a sweeping indictment of how religion perpetuates war, exploitation, and oppression throughout history. I don’t have whatever it takes to say things like “the grace of God.”

To My Fellow Skeptics (and Believers Too) | Raptitude.com The first few times I heard about God, I was already suspicious. My earliest clear memory of it was when I was five, leaning against the screen door of our small town home with my older sister, watching a midsummer thunderstorm unfold. We were in awe, like I have been at every thunderstorm since. I don’t remember if I asked, but my sister said it was God who made the lightning and thunder. Not that she was ever religious, that’s just what her eight-year old mind told me that day. At that point, nearly all of my ideas about God had come from Family Circus comics. Seriously? Later on, in my teenage years, I would recognize the Family Circus to be a conservative, unapologetically fundamentalist cartoon, but at the time I wasn’t aware of the play of politics in the things I read and watched. Before then I thought God was meant to be something like Santa Claus. By eight, Santa Claus was dead to me, and so was God. The The God Delusion Delusion On that level — logic — he’s right on. ~Nietzsche

As I didn't say to the archbishop… | Victoria Coren | Comment is free | guardian.co.uk 'A watermelon!" I shouted at the Archbishop of Canterbury. "She said that she carried a watermelon!" Yes, it was a standard Wednesday night out for me: explaining the plot of Dirty Dancing to the leader of the Church of England. I think Dr Williams has seen the film anyway. Having been invited to a reception at Lambeth Palace (in error, I assumed, as I hurriedly accepted before the mistake could be rectified), I had been taken aback to see the archbishop actually standing in the doorway. "Well done," muttered my friend Charlie as we finally moved through the doorway and into the reception. Sympathetic, perhaps, to my star-struck awkwardness, the kindly Dr Williams came to talk to us again. Instead, I apologised for my random opening remarks by way of a rambling soliloquy about the moment in Dirty Dancing when Jennifer Grey sees Patrick Swayze in a nightclub and fancies him so much that she can say nothing more sensible than: "I carried a watermelon." Oh yes. "Oh, nonsense," I said. Why?