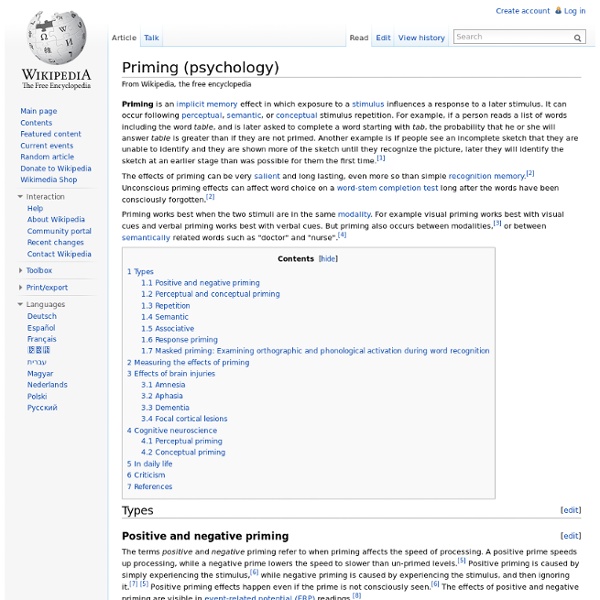 Priming can occur following perceptual, semantic, or conceptual stimulus repetition. For example, if a person reads a list of words including the word table, and is later asked to complete a word starting with tab, the probability that he or she will answer table is greater than if they are not primed. Another example is if people see an incomplete sketch they are unable to identify and they are shown more of the sketch until they recognize the picture, later they will identify the sketch at an earlier stage than was possible for them the first time.[4] The terms positive and negative priming refer to when priming affects the speed of processing. Negative priming is more difficult to explain. The difference between perceptual and conceptual primes is whether items with a similar form or items with a similar meaning are primed. Perceptual priming is based on the form of the stimulus and is enhanced by the match between the early and later stimuli.

Four Rules to Understand What Makes People Tick - Stepcase Lifehack Breaking down human behavior into rules might seem like a gross simplification. But even with the complexities, it is easy to fall into the same mistakes. I’d argue that many heated fights, lost sales and broken hearts are caused by a few critical errors. If you make the wrong assumptions, you’ve lost before you begin. By keeping in mind these rules, you can avoid repeating the same mistakes. Rule One: People Mostly Care About Themselves People aren’t thinking about you. I’ve used this example before but I believe it deserves repeating. Only a tiny sliver is devoted to empathy. This means that you occupy only a tiny percentage of a persons thoughts. Rule Two: People are Motivated by Selfish Altruism To say all behavior is strictly selfish would be misleading. By studying primates, researchers noticed four main categories of selfish altruism. Dominance - Some primates will give help as a way of asserting dominance in the group. Rule Three: People Don’t Think Much Applying the Four Rules

Skills & Competencies CASEL has identified five interrelated sets of cognitive, affective and behavioral competencies. The definitions of the five competency clusters for students are: Self-awareness: The ability to accurately recognize one’s emotions and thoughts and their influence on behavior. Psychology of Color [Infographic] Perhaps no choice is as vital to marketing as color. Whether you are selecting the color for a product or for your email marketing campaign, color has tremendous impact on all of us. Subconsciously, we associate different colors with different things. This infographic examines the psychology of color and looks at some common associations of different colors. While color can be appealing to us visually, a lot more is going on behind the scenes than just an aesthetic. Embed This Graphic On Your Site <img src=” alt=”Psychology of Color Infographic” />Infographic by <a title=”WebpageFX” href=” Embed the Psychology of Color Infographic The psychology of color directly plays into consumer behavior. When you are looking at the best visual choice for your next project, this color infographic should be a handy guide. Marketing with Color Psychology

47 Mind-Blowing Psychological Facts You Should Know About Yourself I’ve decided to start a series called 100 Things You Should Know about People. As in: 100 things you should know if you are going to design an effective and persuasive website, web application or software application. Or maybe just 100 things that everyone should know about humans! The order that I’ll present these 100 things is going to be pretty random. Dr. <div class="slide-intro-bottom"><a href=" gnitive Dissonance: The Minds Most Common Reaction to Truth | Blindfold Inner peace is a journey more are finding themselves on daily. Everyday brings the collective on Earth closer to recognizing it’s unlimited infinite potential and ability to create something new for planet Earth and it’s people. Many of us are beginning to notice that operating from a place of love, peace and understanding is the key to creating change. This makes it more practical, being the change you would like to see in the world is a journey in itself. From this space, we can use the information and events that have been manifesting in front of us to see more clearly, and to recognize that there are concepts of reality we have yet to understand. Cognitive dissonance is a term used in modern psychology to describe the feeling of discomfort when holding two or more conflicting ideas, beliefs, or values. Humanity has been programmed to believe so many different lies on so many different levels. 2. 4. 5.

Ten Reasons People Resist Change - Rosabeth Moss Kanter by Rosabeth Moss Kanter | 12:00 PM September 25, 2012 Leadership is about change, but what is a leader to do when faced with ubiquitous resistance? Resistance to change manifests itself in many ways, from foot-dragging and inertia to petty sabotage to outright rebellions. The best tool for leaders of change is to understand the predictable, universal sources of resistance in each situation and then strategize around them. Here are the ten I’ve found to be the most common. Loss of control. Excess uncertainty. Surprise, surprise! Everything seems different. Loss of face. Concerns about competence. More work. Ripple effects. Past resentments. Sometimes the threat is real. Although leaders can’t always make people feel comfortable with change, they can minimize discomfort.

US study claims being a mummy¿s boy helps men have better relationships By Daniel Bates Published: 20:15 GMT, 21 March 2012 | Updated: 21:49 GMT, 21 March 2012 Good influence: The front cover of The Mama's Boy Myth, in which Kate Stone Lombardi seeks to disprove the stereotype of weak, effeminate sons They have long been ridiculed for being sissies or too feminine. But now it seems that being a mummy’s boy might actually be a good thing for a man. A new book claims that having a close mother-son relationship actually helps boys to have a better relationships with others. Author Kate Stone Lombardi says the old stereotype that these men are weak and more likely to be gay is not true. In fact, mummy’s boys have a ‘broader definition of masculinity’ that is of significant benefit to their mental health. Mothers with close relationships to their sons have featured in countless films including the 1960 Alfred Hitchcock classic ‘Psycho’, in which Norman Bates becomes a neurotic killer. Close: Author Kate Stone Lombardi, shown in a family photo with her own son

Other People Often Aren't As Shallow As They Seem People who aren't doing well socially sometimes feel they can't relate to other people. One common complaint that flows from this is that they feel other people are dumb and shallow. Since they may see themselves as deep and intelligent in comparison, they naturally feel a little alienated. Some people are irredeemably superficial and vacuous. There are many superficial traits that can make people seem more shallow than they are I think a big problem with the "Everyone sucks, I have nothing in common with them" attitude is that you can end up writing off lots of people before you even give them a chance. There are women who seem like all they care about is make-up and clubbing, but who are interested in philosophy and history. Shallowness isn't an All-or-Nothing thing either. Here are some things that may make layered, intelligent people come off as dumbasses at a glance: Personality Accent and style of speaking Many accents have negative stereotypes associated with them. Writing style