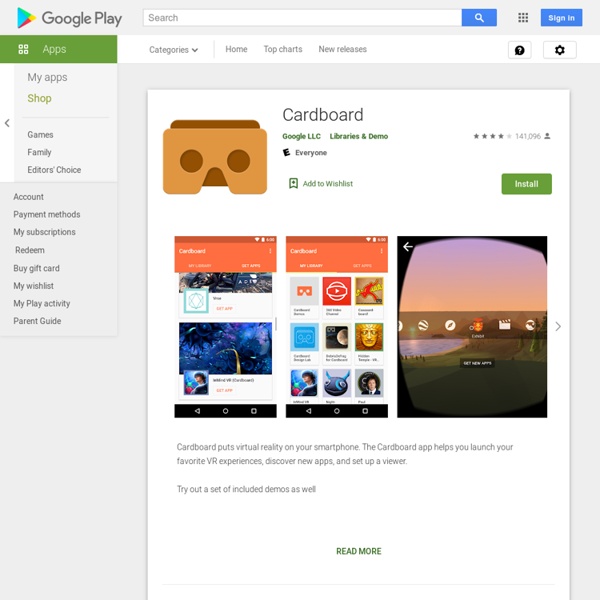 Cardboard puts virtual reality on your smartphone. The Cardboard app helps you launch your favorite VR experiences, discover new apps, and set up a viewer. Try out a set of included demos as well • Earth: Fly where your fancy takes you on Google Earth.• Tour Guide: Visit Versailles with a local guide.• My Videos: Watch your videos on a massive screen.• Exhibit: Examine cultural artifacts from every angle.• Photo Sphere: Look around the photo spheres you've captured.• Arctic Journey: Fly alongside Arctic terns, create your own flower garden, relax under the northern lights and more. To fully enjoy this app you'll need a Cardboard viewer. Learn more and get your own Cardboard viewer at Share your experience through our Google+ community at By using this app you agree to be bound by our Google Terms of Service (Google ToS, Googles general Privacy Policy ( and the additional terms below.

Flipboard – build your own MFL magazine! « Network for Languages London One of my favourite tools at the moment is Flipboard which allows you to collect web links in a few clicks or taps and turn them automatically into a stylish dynamic multimedia magazine! Perfect for a BYOD (bring your own device) environment, the free app is available for iPads, iPod Touches, Android devices and Microsoft tablets and makes it easy to share reading material in a visually appealing format with anyone with an internet connection. There is also a bookmarklet which you can add to your browser letting you quickly save articles you think could be useful for later on in the year or as part of your planning for a particular set of upcoming lessons. You could save this article right now if you wanted! For language teachers, Flipboard could prove to be an effective way of amassing engaging up to date web content for a unit of work which promotes intercultural understanding and authentic language from the target country.

Google Cardboard Design Lab Enjoy an educational and immersive journey through principles for developing virtual reality experiences. Designing great user experiences in virtual reality is considerably different than designing for traditional 2D form factors. Virtual reality introduces a new set of physiological and ergonomic considerations to inform your design work. VR Design Principles Covered1. Using a Reticle2. Fulldive VR What is Fulldive? Fulldive is virtual reality (VR) navigation platform. Fulldive allows you to browse and view a new generation of media, such as watching 3D and 360 photos and videos, and also browse the Internet at a completely new angle like never before. Fulldive VR app works with any Virtual Reality viewer, such as Google Cardboard VR headset. Join us, and explore the future of media with Fulldive.

StarTracker VR -Mobile Sky Map It's the mobile planetarium in VR, designed for astronomy fans to explore the universe. StarTracker VR introduce a brand new VR methodology to the VR world, we call it enhanced VR. It map 3D Star Field into a sphere surface, and then look from outside into the sphere ball. You can image all near objects that will move much faster than a normal 3D mapping, finally this deliver a great immersive VR experience you never experienced before. Note: Please moving head slowly to immersive into the gorgeous space with enhanced VR. Dive into 3D star field in VR world, explore the space which is full with stars, constellations, planets and messier objects in different layers.

Expeditions Google Expeditions is an immersive learning and teaching tool that lets you go on VR trips or explore AR objects. Explore historical landmarks, go down to the atomic level, get up close with sharks, even visit outer space! In the classroom or with groups, Google Expeditions allows a teacher acting as a “guide” to lead classroom-sized groups of “explorers” through VR tours or show them AR objects. Guides can use a set of tools to point out interesting things along the way.

IKEA VR Experience IKEA VR Experience is a thought-provoking creation that depicts the uncertain nature of existence and explores what it means to be human.Enter.Life in the kitchen is efficient; conventional. But dare to gaze outside, beyond your patio: an infinity awaits you. It has been watching since the moment you were born; ready to steal you away like a desirable pencil. And, it would at first seem that as long as it exists, a person cannot truly be themself. Sketchfab VR The concept is good, but the current execution is rough.- The 'look down' menu is quite intrusive and makes it difficult to enjoy anything that has a floor or content below you. This needs to go. I would much prefer a button press that brings up the menu instead.- The music is very canned and hokey feeling. SNOW Only played half an hour, but so much fail in it. It's basically a buggy alpha build with a cash shop in it.My experience:1.) Tutorial #1 "Slalom the poles":- The game welcomes me with with graphical clipping issues of the snowboard as if it was 1994.- I touch a pole, the level insta-restarts. No animation, sound or anything, just teleport back to start.- I try a grab and land before letting it go. Another insta-restart. I assume there was no budget for a bailing animation.2.)

The VR Museum of Fine Art Welcome to The VR Museum of Fine Art, Steam's finest art gallery.Depending on who you ask, of course. If you've been training to be a space pirate and building fantastical contraptions all day, the Museum is your ticket to a well-deserved break. Surround yourself with 1:1 scale sculptures and paintings, and we won't tell anybody if you touch the merchandise! No rope barriers or glass walls here. The Night Cafe: A VR Tribute to Vincent Van Gogh Played on DK2 (Runtime 1.3)Nice little Gem,I totally recommend this to every VR User. A new and innovative Way to bring classic Artworks closer to a broader public Audience. I would gladly spend Money for an Experience like that, if it would offer a lot more (and diverse) Artists and their Works.