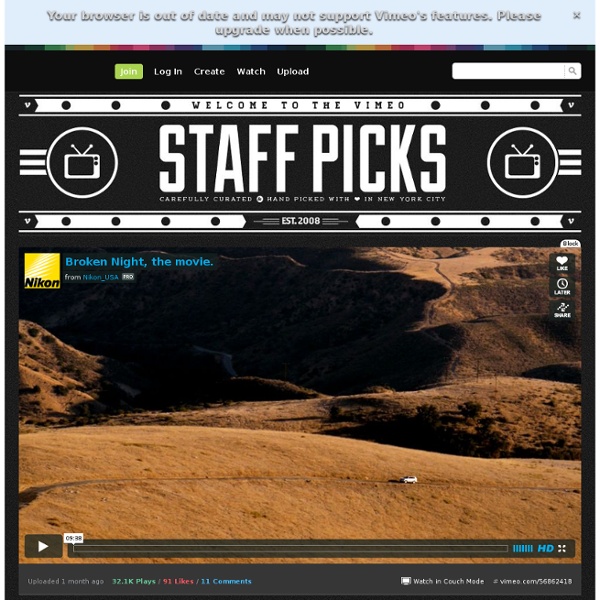 Film School - Filmmaking About this presentation In world with Vine, Snapchat, and Twitter, how can creatives capture attention to make their voices heard? In this 99U talk, best-selling author and founder of VaynerMedia Gary Vaynerchuk breaks down how our work can cut through our current “A.D.D. Culture” — One where we binge-watch entire television seasons in one sitting and prefer texting to phone calls. Video: Talking Heads November 1980 Concert Recorded Live On 11/4/1980 At Capitol Theatre In Passaic, NJ January 2016 Video: Talking Heads November 1980 ConcertRecorded Live On 11/4/1980 At Capitol Theatre In Passaic, NJ There is no doubt if you loves music in the 1980's you have enjoyed listening to, and perhaps even danced to, Talking Heads music.

CHIEF SEATTLE'S LETTER CHIEF SEATTLE'S LETTER "The President in Washington sends word that he wishes to buy our land. But how can you buy or sell the sky? the land? Mohawks - Kanehsatake 270 Years of Resistance From the playlist : Manifesto for Interventionist Media - because Art is a Hammer Manifesto Point # 1: The original project idea and goals come from the community partner. Kanehsatake 270 Years of Resistance is arguably Alanis Obomsawin's most important film, documenting the military 1990 siege of a Mohawk reserve near Oka, Quebec, and its causes. I chose this film here because the celebrated Abenaki filmmaker told me recently: "For me a real documentary is when you are really listening to somebody. They are the ones that tell you what the story is. Not you."

Aomawa Shields: Life in Unlikely Places The stars, they do align — but usually in a way that you could never have fathomed. Eighteen years ago, Aomawa Shields had an undergrad degree in planetary sciences from MIT and had put in a year on a doctorate in astrophysics, but she dropped out to pursue another passion: acting. She was looking for her big break in L.A. and answering phones at Caltech to support herself when, on a whim, she auditioned for a public-television science show. Surprise!

Chief Seattle's Speech of 1854 - Version 1 Version 1 (below) appeared in the Seattle Sunday Star on Oct. 29, 1887, in a column by Dr. Henry A. Smith. "CHIEF SEATTLE'S 1854 ORATION" - ver . 1 Yonder sky that has wept tears of compassion upon my people for centuries untold, and which to us appears changeless and eternal, may change. Independent Lens . AT HOME IN UTOPIA . The Film “This was all an experiment. The people that started the experiment thought, ‘We’ll end up with heaven on earth.’” —Paul “Pete” Rosenblum In the mid-1920s, thousands of immigrant Jewish garment workers catapulted themselves out of the urban slums and ghettos by pooling their resources and building cooperatively owned and run apartment complexes in the Bronx.

Audrey Hepburn’s Moon River An American geisha sings alone on a New York City fire escape in 1961. The actress playing the guitar gave birth just months prior and has a vocal range narrower than the space she sings in (and one that will yield to voice-overs in future roles). The scene itself – a rather unvarnished interlude dropped into one of Hollywood’s most sparkling tales – was almost left on the cutting-room floor. How could it be anything less than magic? Blake Edwards’ film version of Breakfast at Tiffany’s cemented New York as the American Paris and Audrey Hepburn as a fashion icon. “Moon River” won composer Henry Mancini Record of the Year and Mancini and lyricist Johnny Mercer Song of the Year at the 1962 Grammy Awards.

Rules for correct use of the apostrophe In UK and US English, the apostrophe is used: To indicate the possessive. To indicate missing letters. Reverb Soundcheck: Bill Frisell When it comes to guitarist Bill Frisell, the word that comes up time and again is “amazing.” His fans use it often, most recently with the boundary-breaking jazz guitarist’s latest album, When You Wish Upon A Star, which was released in late January. This collection of TV and movie music has inspired glowing reviews.

Breathtaking World of Ice under a Frozen River (6 pics) There is a beauty that lies underneath the icy Tianuksa River in Leningradskaya Oblast, Russia. An otherworldly cavern of layered ice and glistening crystalline forming under the surface of the river. This phenomenon of a place was discovered by 55-year-old Russian photographer Yuri Ovchinnikov and his son completely by accident. Air gaps create a two foot gap allowing the brave explorers to carefully crawl into the cave in hopes that the ice would not crack beneath them. These photos express a risk and a dedication to allow others to see such an amazing unseen world.

A World Without People - In Focus For a number of reasons, natural and human, people have recently evacuated or otherwise abandoned a number of places around the world -- large and small, old and new. Gathering images of deserted areas into a single photo essay, one can get a sense of what the world might look like if humans were to vanish from the planet altogether. Collected here are recent scenes from nuclear-exclusion zones, blighted urban neighborhoods, towns where residents left to escape violence, unsold developments built during the real estate boom, ghost towns, and more. [41 photos] Use j/k keys or ←/→ to navigate Choose: