Was Ebola Behind the Black Death? 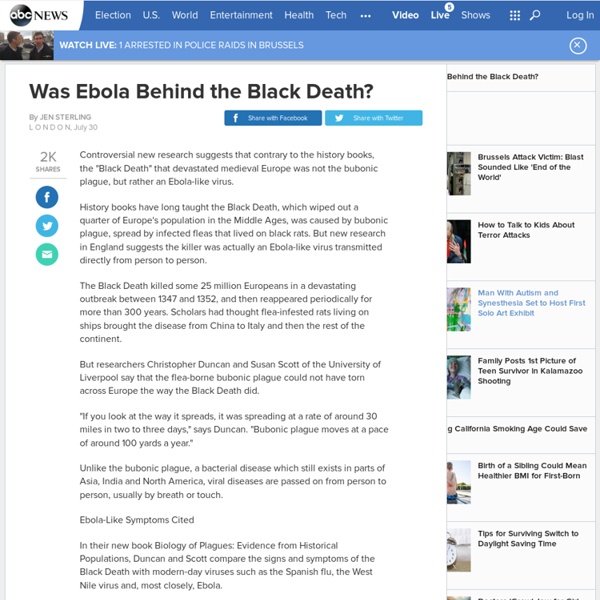 Controversial new research suggests that contrary to the history books, the "Black Death" that devastated medieval Europe was not the bubonic plague, but rather an Ebola-like virus. History books have long taught the Black Death, which wiped out a quarter of Europe's population in the Middle Ages, was caused by bubonic plague, spread by infected fleas that lived on black rats. But new research in England suggests the killer was actually an Ebola-like virus transmitted directly from person to person. The Black Death killed some 25 million Europeans in a devastating outbreak between 1347 and 1352, and then reappeared periodically for more than 300 years. Scholars had thought flea-infested rats living on ships brought the disease from China to Italy and then the rest of the continent. But researchers Christopher Duncan and Susan Scott of the University of Liverpool say that the flea-borne bubonic plague could not have torn across Europe the way the Black Death did. Ebola-Like Symptoms Cited

The Black Death: Bubonic Plague In the early 1330s an outbreak of deadly bubonic plague occurred in China. The bubonic plague mainly affects rodents, but fleas can transmit the disease to people. Once people are infected, they infect others very rapidly. Plague causes fever and a painful swelling of the lymph glands called buboes, which is how it gets its name. The disease also causes spots on the skin that are red at first and then turn black. Since China was one of the busiest of the world's trading nations, it was only a matter of time before the outbreak of plague in China spread to western Asia and Europe. "Realizing what a deadly disaster had come to them, the people quickly drove the Italians from their city. The disease struck and killed people with terrible speed. "ate lunch with their friends and dinner with their ancestors in paradise." By the following August, the plague had spread as far north as England, where people called it "The Black Death" because of the black spots it produced on the skin.

Ebola Virus Disease - Symptoms, Diagnosis, Treatment of Ebola Virus Disease - NY Times Health Information Ebola Minnesota Department of Health October 27, 2014 Download PDF version formatted for print: Ebola Fact Sheet (PDF: 46KB/2 pages) Other languages: French (PDF: 48KB/2 pages) Hmong (PDF: 40KB/2 pages) Somali (PDF: 40KB/2 pages) Spanish (PDF: 39KB/2 pages) What is Ebola disease? Ebola disease is caused by the Ebola virus and is one of a number of hemorrhagic fever diseases. What are the symptoms of Ebola disease? Fever Headache Joint and muscle aches Weakness Diarrhea Vomiting Stomach pain Lack of appetite Abnormal bleeding Some patients have a rash, red eyes, hiccups, cough, sore throat, chest pain, difficulty breathing or swallowing, or bleeding inside and outside the body. Symptoms most commonly start 8-10 days after coming into contact with the Ebola virus but can occur as early as 2 days to up to 21 days after exposure. How is Ebola disease spread? Ebola virus is spread by direct contact with: A person infected with the Ebola virus cannot pass it to others before any symptoms appear.