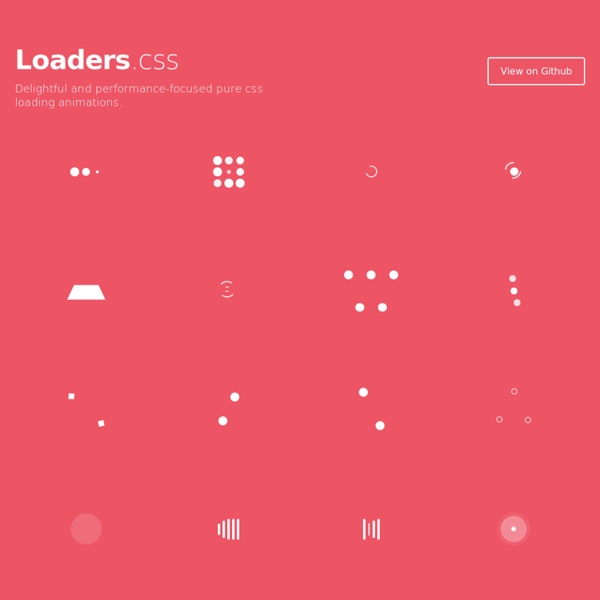 Animation Principles for the Web - CSS Animation As front-end designers and developers, we use CSS to style, position and create great looking sites. We often use CSS to add movement to pages in the form of transitions or even animations, but we don’t usually go much beyond that. Animation can be a powerful tool to help our visitors and customers understand and benefit from our designs.

Material Design for Bootstrap Material Design for Bootstrap is a theme for Bootstrap 3 which lets you use the new Google Material Design in your favorite front-end framework. If you like this project you can support me by donating something on Gratipay, starring this repository, or reporting bugs and ideas. Read more about Material Design for Bootstrap at the Github page. Motionographer Elastic: MTV Video Music Awards 2014 (case study + interview) Since its proverbial blast-off, MTV has provided a visual language and soundtrack to the lives of generations. Once a radical entertainment concept, the channel has evolved from ‘music television’ to a global identity. No longer just a 24-hour music network, MTV is a brand in flux. Ask a person on the street which MTV they grew up with and each will recount something different. When it comes down to it, everyone has their own MTV.

Top Bar Build With HTML Classes The top bar is a pretty complex piece of magical UI goodness. We rely on many presentational classes to define its look and feel, and there's a lot happening in the JS. The top bar is hoverable by default, but you can change it to use click events instead by adding data-options="is_hover: false" to the <nav> element. If you have a hoverable topbar, it will close itself on click by default, but this behavior can be prevented by setting data-options="dropdown_autoclose: false". Vibrant.js - Extract prominent colors from an image. Extract prominent colors from an image.Vibrant.js is a javascript port of the awesome Palette class in the Android support library. Showcase Use of Vibrant is pretty straight forward, but because code works better than explanation, here's an example: As you can see, Vibrant's first argument is an image.

Motionographer Nickelodeon Worldwide Refresh: Interview with dyrdee Say hello to the new Nick! Just in time for the back-to-school season, Nickelodeon, the children’s television network, is refreshing their worldwide broadcast package with a series of bubbly graphics that incorporate their most endearing properties. On the surface, the approach is deceptively simple, but make no mistake; designing for kids isn’t child’s play. Using an animated grid system, graphic elements squash-and-stretch into place, effectively boxing the type into readable blocks of information. The tune-in lockups are a jigsaw puzzle of texture and pattern, but once resolved, are easy to read, despite the percolating animation.

The State of SVG Animation : Adobe Dreamweaver Team Blog The world of SVG (Scalable Vector Graphics) is fascinating, and with everything you can do with it and all the options you have it is overwhelming. SVG is an XML-based vector image format for two-dimensional graphics, with support for interactivity and animation. In other words, SVGs are XML tags that render shapes and graphics, and these shapes and graphics can be interacted with and animated much like HTML elements can be. One of the frequently asked questions I get on SVG is about animating SVG images—not only the how, but the what.