24 Invaluable Skills To Learn For Free Online This Year 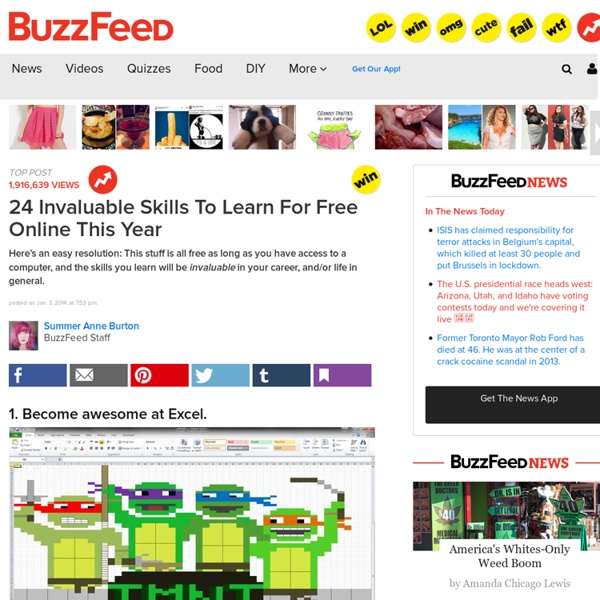 Why Procrastinators Procrastinate PDF: We made a fancy PDF of this post for printing and offline viewing. Buy it here. (Or see a preview.) pro-cras-ti-na-tion |prəˌkrastəˈnāSHən, prō-| noun the action of delaying or postponing something: your first tip is to avoid procrastination. Who would have thought that after decades of struggle with procrastination, the dictionary, of all places, would hold the solution. Flow and Adolescence The flow experience is a state of complete involvement in an activity that requires complete concentration (Csikszentmihalyi, 1999). Flow is characterised by the matching of high environmental challenges with equally high levels of personal skills, the merging of action and awareness, the loss of reflexive self-consciousness, a sense of control and a distortion of temporal experiences (Nakamura & Csikszentmihalyi, 2005). Activities that produce flow experiences are intrinsically motivating and as a result they are valuable in that they produce a state of being that is an end to itself. Furthermore they are also hypothesised to allow an individual to flourish and function at their best (Larson, 1988). Due to the rewarding nature of flow experiences, the activities that result in flow tend to be preferentially replicated (Csikszentmihalyi & Massimini, 1985) which impacts upon an individual’s life theme.

Who is a philosopher? “Wonder is the feeling of the philosopher, and philosophy begins in wonder.” Plato “…A philosopher… has…[a] structure of thought unified by a purpose for his own life and for mankind.” Will Durant, The Story of Philosophy, p. 141 Philosophers are commonly called “thinkers,” but really, that is not an adequate definition of a philosopher. A philosopher looks at the world in wonder.

Cruisers' choice: Best cruise ships of 2015 At least that's what the 2015 Cruise Critic Cruisers' Choice Awards, announced Monday, are indicating. Disney Cruise Line dominated this year's awards, winning in 12 categories. Disney Cruise Line won the coveted "best overall" cruise line award for the third year in a row. The Disney Dream ship won in the large ship category, and Disney Wonder won in the midsize category. Other Disney awards include Disney Dream's wins for "best entertainment" and "best cruises to the Bahamas" and Disney Fantasy's wins for "best cabins," "best service" and "best for families." The awards are based on consumer reviews by members of the Cruise Critic website.

How to hack your body language for better interviews Research interviews go best when participants feel comfortable and confident — they’re more verbal, more willing to explore, and more willing to play along. So when an interview isn’t going well, I check for signs of low status in the person I’m interviewing and adjust my body language to make them feel more in charge. (These techniques come from improv theater classes I took many years ago in San Francisco. In addition to learning about “yes and,” listening, and teamwork, I was introduced to the important concept of status — and how body language communicates high and low status.) How to spot signs of low status Motivating the Elephant: Persistence in Education Online & Blended Learning Can Less Successful Students Help with Retention? (by Dr. Gail Krovitz)by Gillian Seely | April 17th, 2014

Markdown syntax reference guide / General Questions / Knowledge Base - Writer Pro Support Writer supports a subset of the Markdown formatting language. This lets you apply basic formatting by adding a few punctuation characters, such as *emphasis* and **importance**. It’s familiar, and in Writer for Mac, it’s also subtly formatted on-screen with Writer’s Auto Markdown. (Auto Markdown is not available in Writer for iPad and iPhone… yet. Hector An intelligent man who is not afraid to show his inner feelings. He has an opinion and answer for everything. Open minded. A leader who is always there to share his triumphs. One who is eager to learn. Always has a story to share.