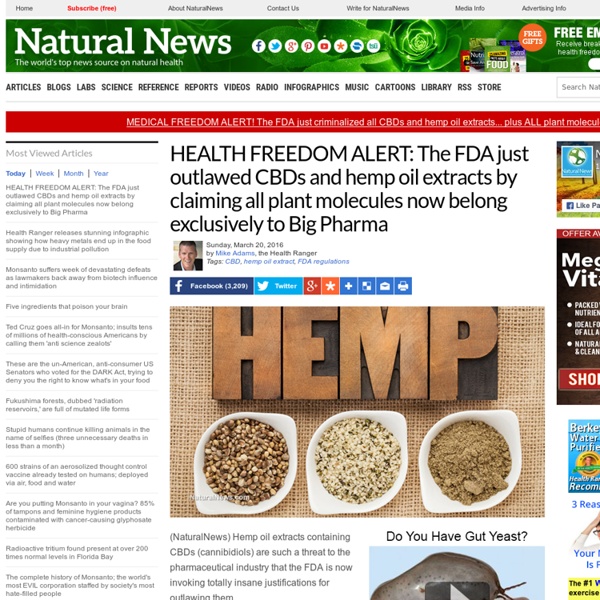 (NaturalNews) Hemp oil extracts containing CBDs (cannibidiols) are such a threat to the pharmaceutical industry that the FDA is now invoking totally insane justifications for outlawing them. CBDs are non-psychoactive compounds found naturally in hemp plants. They work so well as powerful natural medicine that people everywhere are realizing CBDs work better than pharmaceuticals for treating epilepsy, seizures, neurological disorders and other serious health conditions (including HIV infections). So the FDA has just launched a massive regulatory assault against CBDs by invoking the most insane logic you've ever heard. Here's how it goes: 1) CBDs work so well that drug companies are now investigating them to be approved by the FDA as medicines. 2) Because CBDs are being investigated by drug companies, the FDA has granted CBDs status as being "investigated as a new drug." The FDA has now declared war on CBDs and hemp oil extracts. Sources for this article include:

Code 291: Swedish Police Cover-Up Thousands of Crimes Involving “Refugees” Rapes, assaults, terror threats kept secret Paul Joseph Watson Prison Planet.com February 4, 2016 Swedish police have covered up thousands of crimes involving migrants over the past four months, all of which have been classified under a secret ‘291 refugee code’ designation, it has been revealed. According to a report in Swedish newspaper Svenska Dagbladet, around 5,000 incidents have been kept secret, including 559 cases of violence, 194 assaults, two terror threats and four rapes.

Here’s how much corporations paid US senators to fast-track the TPP bill A decade in the making, the controversial Trans-Pacific Partnership (TPP) is reaching its climax and as Congress hotly debates the biggest trade deal in a generation, its backers have turned on the cash spigot in the hopes of getting it passed. “We’re very much in the endgame,” US trade representative Michael Froman told reporters over the weekend at a meeting of the 21-member Asia-Pacific Economic Cooperation forum on the resort island of Boracay. His comments came days after TPP passed another crucial vote in the Senate. That vote, to give Barack Obama the authority to speed the bill through Congress, comes as the president’s own supporters, senior economists and a host of activists have lobbied against a pact they argue will favor big business but harm US jobs, fail to secure better conditions for workers overseas and undermine free speech online. Those critics are unlikely to be silenced by an analysis of the sudden flood of money it took to push the pact over its latest hurdle.

The Best "Democracy" Money Can Buy: For Every Dollar Spent Influencing US Politics, Corporations Get $760 Back The first time we read the recent analysis by the Sunlight Foundation in which it combed through 14 million corporate records, including data on campaign contributions, lobbying expenditures, federal budget allocations and spending, in order to determine the “rate of return” on lobbying and spending to buy political goodwill, we were left speechless. To be sure, we had previously shown that when it comes to the rate of return on lobbying, the rates were simply staggering, and ranged anywhere between 5,900% for oil subsidies, to 22,000% for multinational tax breaks and even higher for America’s legal drug dealers. But nothing could prepare us for this. According to the foundation’s analysis, between 2007 and 2012, 200 of America’s most politically active corporations spent a combined $5.8 billion (with a B) on federal lobbying and campaign contributions.

Mugshots of mobsters in 1930s New York found in private diaries of detective now up for auction Eugene Canevari joined the New York Police Department and worked for 24 years in crimeHe dealt with some of the most prominent New York organized crime figures of the eraUpon retiring in 1952 he took with him a collection of police documents and photos as souvenirs By James Gordon Published: 21:49 GMT, 20 June 2013 | Updated: 18:27 GMT, 30 November 2013 Striking images of New York mobsters from the dirty thirties have been revealed as they come up for auction. Over 24 years, Eugene Canevari, a detective with the New York Police Department began working on cases involving some of the most well-know crime figures of the era: Lucky Luciano, Louis 'Lepke' Buchalter, Dutch Schultz and Vincent 'Mad Dog' Coll. After retiring in 1952, Canevari took with him a number of police documents and photographs that charted his long career.

U.S. Congress Now Virtually 100% All-In on Ukraine’s War Against Russia; Americans Are at Least 67% Opposed Eric Zuesse Last night, December 11th, the U.S. Senate voted unanimously as the U.S. House had previously voted 98%: to join Ukraine’s war against Russia and against Ukraine’s own ethnic Russians in Ukraine’s southeastern districts, in order to eliminate those resistant Ukrainians and their families.

Why Hillary Clinton Should Not Be The Democratic Presidential Nominee  The biggest problem in the U.S. now is corruption. The public know this, and are therefore unprecedentedly cynical about their government; they (as will soon be documented here from a Gallup survey) overwhelmingly view our government as being corrupt. However, conservatives accept corruption as the natural order of things, something that must simply be accepted, because the rich have the most property to protect and therefore (in the view of conservatives) the rich have the right to rule so as to protect their property (since they have the most of it). Furthermore, conservatives think that the rich have earned their wealth by selling what people want, and have therefore already proven their superiority -- they've earned their control over the government. In the view of conservatives, poor people have the least property to protect, and should therefore have the least say in government.