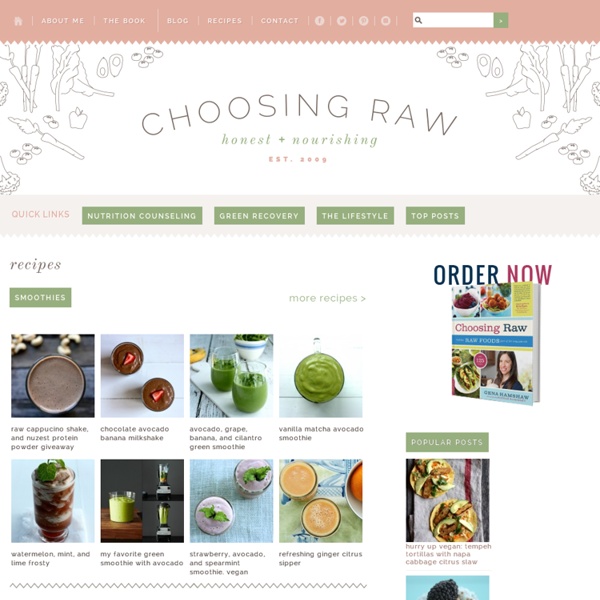 Quickie Raw Vegan Coconut Yogurt Recipe – 3 Ingredients » Kristen's Raw Thursday, November 15th, 2012 I make my own homemade raw vegan coconut yogurt all the time. And, every time I make it, I tweet or post about it on facebook. And, every time I do that, someone asks me how I make it. Although I have a recipe with video here, I’m going to write a quickie recipe post that makes the recipe, well, a bit quicker (by way of the number of ingredients). A creamy bowl of nourishing raw vegan coconut yogurt topped with raw cacao nibs.

Iron in the Vegan Diet by Reed Mangels, PhD, RD From Simply Vegan 5th Edition Summary Dried beans and dark green leafy vegetables are especially good sources of iron, even better on a per calorie basis than meat. Iron absorption is increased markedly by eating foods containing vitamin C along with foods containing iron. Vegetarians do not have a higher incidence of iron deficiency than do meat eaters. The End of Food In December of 2012, three young men were living in a claustrophobic apartment in San Francisco’s Tenderloin district, working on a technology startup. They had received a hundred and seventy thousand dollars from the incubator Y Combinator, but their project—a plan to make inexpensive cell-phone towers—had failed. Down to their last seventy thousand dollars, they resolved to keep trying out new software ideas until they ran out of money.

20 Awesome Do It Yourself Projects Thursday, June 14, 2012 4:30 am, Posted by Chris Groves | Internet 20 Awesome Do It Yourself Projects Topics: At Home Project Ideas , Creative DIY Home Projects , Do It Yourself Projects for 2012 , Fun How To Projects , What to Do with Extra Stuff Are you bored and have a bunch of extra little items hanging around here and there? Well we were in the same boat so we decided to round up 20 different awesome at home projects you can do. Anything from soda pop cap lids to spoons and more. Vegan Diet Infographic Want to know how to be healthy and cruelty-free? No worries—eating vegan is easy! Get all your answers and more with PETA’s “Wondering About a Vegan Diet?” infographic, and don’t forget to share this infographic on Facebook. Stay-At-Home Mom Makes Creative Lunches For Her Kids, Becomes Internet Star Anyone who takes care of kids, especially their parents, knows just how hard it can sometimes be to get kids to eat right. When Malaysian mommy Samantha Lee came up with playful story-themed bento lunchboxes to get her kids to eat right, she had no idea they would also catapult her to internet fame. [Read more...] Lee began making the creative story- and pop culture-inspired lunches in 2008, when pregnant with her second daughter.

TetraBox Light by Ed Chew Liquid to Light Designer Ed Chew takes a green step in the right direction with the TetraBox lamp, a light object made from discarded drink packets that would have otherwise ended up in landfills already packed to the brim. The design is achieved by unfolding the packets and refolding them into hexagonal and pentagonal sections that are then pieced together to form a geodesic sphere or any other desired shape. Here, the Epcot-like ball makes an attractive overhead light and casts an impressive web of shadows and shapes on the surrounding space. Nursing Schools : LPN RN BSN MSN : Online Nursing Degree Vegans are frequently misunderstood as fringe eaters with an unnatural passion for animal rights. While many vegans do feel passionately about animals, its time for others to see that a vegan diet and lifestyle go way beyond animal rights. Following a healthy, balanced vegan diet ensures a host of health benefits as well as prevention of some of the major diseases striking people in North America.

5 Vegan Recipes For Under $4 - Raw Till Whenever Everyone is always looking for easy simple to make healthy vegan recipes. Going and buying processed vegan treats at the grocery store isn’t always the best option. They are usually highly processed, full of preservatives and high in fat. In today’s article we are going to give you 5 simple low-fat plant-based vegan recipes that may very well become apart of your daily rotation. There are 3 conditions each recipe has to meet: A Vegan's Guide to Good Nutrition We all know that vegan foods are far healthier than animal products. They’re cholesterol-free, and they’re more likely to be low in saturated fat and calories and high in fiber, complex carbohydrates, and cancer-fighting antioxidants. Of course, I’m not talking vegan cookies, candy or potato chips. If you want to reap the health benefits of a vegan diet—a slim waistline, normal blood pressure, lots of energy, and a reduced risk of developing heart disease, diabetes, and certain types of cancer—you should eat an array of fruits, veggies, beans, whole grains, and other wholesome plant-based foods. Big surprise, huh? If you’re a vegan, everyone from your third cousin to your third-grade teacher has likely quizzed you about where you get your nutrients.

Recipes - Juices - Dr Juice 1 inch slice large carrot 2 apples (Golden Delicious or Royal Gala are best) 1/2 stick celery 1 small whole raw beetroot 1/2 inch slice unwaxed lemon 1/2 slice ginger Ice Juice the lot, except for the ice. Pour juice over ice and enjoy! A cloudy red juice combining the sweet and creamy flavours of freshly extracted apple and carrot juice with the savoury sodium of celery the kick of lemon and ginger. There aren't too many medications your average Dr would give out that contain the array of health-building constituents of Dr Juice.