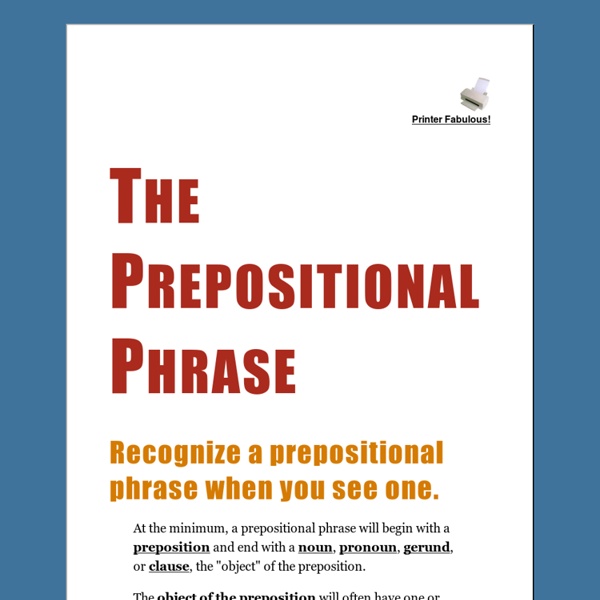 Gerunds, Participles, and Infinitives Summary: This handout provides a detailed overview (including descriptions and examples) of gerunds, participles, and infinitives. Contributors:Purdue OWLLast Edited: 2011-12-09 01:47:54 A gerund is a verbal that ends in -ing and functions as a noun. Gerund as subject: Traveling might satisfy your desire for new experiences. Gerund as direct object: They do not appreciate my singing. Gerund as subject complement: My cat's favorite activity is sleeping. Gerund as object of preposition: The police arrested him for speeding. A gerund phrase is a group of words consisting of a gerund and the modifier(s) and/or (pro)noun(s) or noun phrase(s) that function as the direct object(s), indirect object(s), or complement(s) of the action or state expressed in the gerund, such as: The gerund phrase functions as the subject of the sentence. Finding a needle in a haystack would be easier than what we're trying to do. The gerund phrase functions as the direct object of the verb appreciate. Punctuation

Welcome to English Grammar Express Comparative Adjectives English Lesson | Kaplan English Blog In English, adjectives are used to describe things. We use comparative adjectives to compare and contrast things that we want to describe. There is a system for creating comparative adjectives. Using this system will help you write and speak more clearly, and will make you a better English speaker! One Syllable Comparative Adjectives Add ‘-er’ to end of an adjectiveExamples: tall/taller; smart/smarter If the word ends in ‘e’, just add an ‘r’ Examples: late/later; large/larger If the word is one-syllable, ends in a single consonant and has a single vowel before it, double the last consonant and add ‘er’Examples: big/bigger; hot/hotter; thin/thinner; Two, Three or More Syllable Comparative Adjectives For most two-syllable adjectives, add “more” before the adjective to form the comparative.Examples: careful/more careful; prepared/more prepared; If the word ends in ‘y’, remove it and add ‘ier’Examples: angry/angrier; shiny/shinier Exceptions Of course, with any rule in English, there are exceptions.

Grammar Web Guide What I know about grammar is its infinite power. To shift the structure of a sentence alters the meaning of the sentence, as definitely and inflexibly as the position of a camera alters the meaning of the subject photographed. Many people know camera angles now, but not so many know about sentences. -- Joan Didion The term "grammar" can be applied to the description of language behavior as well as to prescriptions for correct language use. For the purposes of this guide, I am going to assume that the second meaning is the operative one here and that teachers seeking Internet help with grammar will sometimes want reference information and at other times will want explanations and exercises that can be given to students. As a comparison of grammar textbooks and workbooks will show, there can be some disagreement about basic terms. Reviewing Grammatical Terms And Concepts Focus On Common Errors Miscellany Grammar Resources on the Web

Verb Tenses In English, there are three basic tenses: present, past, and future. Each has a perfect form, indicating completed action; each has a progressive form, indicating ongoing action; and each has a perfect progressive form, indicating ongoing action that will be completed at some definite time. Here is a list of examples of these tenses and their definitions: Simple Forms Present Tense Present tense expresses an unchanging, repeated, or reoccurring action or situation that exists only now. Past Tense Past tense expresses an action or situation that was started and finished in the past. Future Tense Future tense expresses an action or situation that will occur in the future. The speaker of the House will finish her term in May of 1998. The future tense can also be expressed by using am, is, or are with going to. The surgeon is going to perform the first bypass in Minnesota. We can also use the present tense form with an adverb or adverbial phrase to show future time. The president speaks tomorrow.

The Reflexive Pronouns Song Verb Tenses Summary: This handout explains and describes the sequence of verb tenses in English. Contributors:Chris Berry, Allen Brizee, Elizabeth AngeliLast Edited: 2013-09-14 09:29:01 Strictly speaking, in English, only two tenses are marked in the verb alone, present (as in "he sings") and past (as in "he sang"). Simple Present: They walk Present Perfect: They have walked Simple Past: They walked Past Perfect: They had walked Future: They will walk Future Perfect: They will have walked Problems in sequencing tenses usually occur with the perfect tenses, all of which are formed by adding an auxiliary or auxiliaries to the past participle, the third principal part. ring, rang, rung walk, walked, walked The most common auxiliaries are forms of "be," "can," "do," "may," "must," "ought," "shall," "will," "has," "have," "had," and they are the forms we shall use in this most basic discussion. Present Perfect The present perfect consists of a past participle (the third principal part) with "has" or "have." 1. 2.

Appositives Summary: This handout defines appositives and explains how they are used. Contributors:Chris Berry, Dana Lynn DriscollLast Edited: 2013-04-18 03:29:26 An appositive is a noun or pronoun — often with modifiers — set beside another noun or pronoun to explain or identify it. Your friend Bill is in trouble. My brother's car, a sporty red convertible with bucket seats, is the envy of my friends. The chief surgeon, an expert in organ-transplant procedures, took her nephew on a hospital tour. An appositive phrase usually follows the word it explains or identifies, but it may also precede it. A bold innovator, Wassily Kandinsky is known for his colorful abstract paintings. The first state to ratify the U. A beautiful collie, Skip was my favorite dog. Punctuation of appositives In some cases, the noun being explained is too general without the appositive; the information is essential to the meaning of the sentence. Here are some examples.

English tests - Learn English - Online grammar tests, dictation tests, vocabulary tests, memory tests, daily test, and reading and comprehension tests Learn English Free Test Your English How To Use This Page Here you will find English tests online to test your listening, memory, vocabulary, reading and comprehension, spelling and grammar skills. Some of the tests will open up in a new browser window, when you have finished the game just close the window. Business English | Confusing words | Dictation | Gap Fill | Grammar | Memory Placement | Reading and Comprehension | Sorting and Matching | Spelling Tests | Vocabulary English Quizzes | English Games These tests have been developed to work best using Chrome, Firefox or IE. Business English Business English abbreviations test - How much do you know about abbreviations used in business? Job Titles - Do you know who does what in a company? Which department - Can you name the departments in a company? Confusing words Any vs Some Been vs Gone Borrow vs Lend By vs Until Check vs Control He's vs His Human | Man | People| Person | Persons I / Me / My Say / Tell / Ask There / Their / They're To / Too / Two !

Subject/Verb Agreement Summary: Ever get "subject/verb agreement" as an error on a paper? This handout will help you understand this common grammar problem. Contributors:Joshua M. This handout gives you several guidelines to help your subjects and verbs agree. 1. She and her friends are at the fair. 2. The book or the pen is in the drawer. 3. The boy or his friends run every day. His friends or the boy runs every day. 4. He doesn't like it. They don't like it. 5. One of the boxes is open The people who listen to that music are few. The team captain, as well as his players, is anxious. The book, including all the chapters in the first section, is boring. The woman with all the dogs walks down my street. 6. Each of these hot dogs is juicy. Everybody knows Mr. Either is correct. 7. The news is on at six. Note: the word dollars is a special case. Five dollars is a lot of money. Dollars are often used instead of rubles in Russia. 8. These scissors are dull. Those trousers are made of wool. 9. There are many questions. 10. 11.

Comics :: Grammar This is a grammar comic about the proper usage of who versus whom. A look at the meaning of "flushing out an idea." This comic will LITERALLY make butterflies explode out of your underpants. A guide explaining when to use i.e. instead of e.g. The right way to use an apostrophe (in illustrated form). All artwork and content on this site is Copyright © 2016 Matthew Inman.