Sorting out the truth in politics 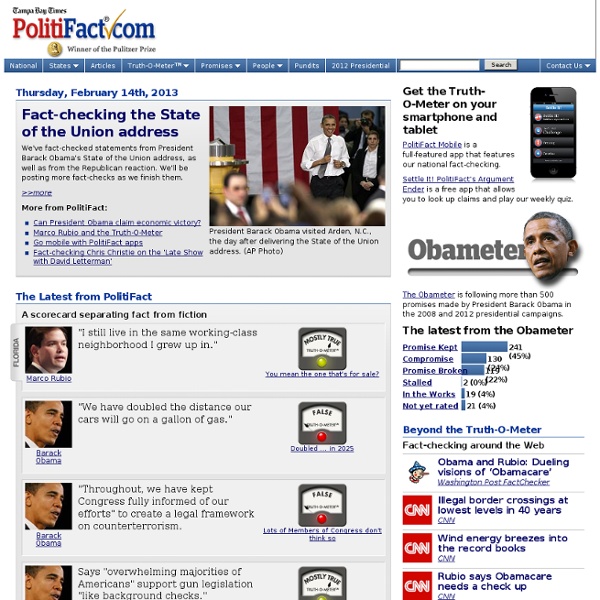 On The Media: This Week PoliGraph | Minnesota Public Radio | Minnesota Posted at 2:00 PM on April 4, 2012 by Catharine Richert ( 6 Comments ) Filed under: PoliGraph A union and a liberal organization have teamed up to run a TV ad against 8th District Republican Congressman Chip Cravaack. The spot targets the first-term lawmaker for voting in favor of Republican Rep. Paul Ryan's fiscal year 2013 budget proposal. Cravaack voted to give "big oil companies more tax breaks," a woman's voice in the ad states. The ad, which is being paid for by the American Federation of State, County and Municipal Employees and Americans United for Change, gets its number right but its description of what Cravaack voted for is misleading. The Evidence Like most of his Republican colleagues, Cravaack voted in favor of Ryan's $3.5 trillion fiscal year 2013 budget proposal, which passed the U.S. Budgets are also used to frame election-year politics, and this one is no exception. But the ad says Cravaack voted to give oil companies more tax breaks. The Verdict THOMAS, H. Audio player code:

CNN.com - Breaking News, U.S., World, Weather, Entertainment & Video News Revisiting the cost of the Bush tax cuts - The Fact Checker ((Andrew Harrer/Bloomberg)) “After Democrats and Republicans committed to fiscal discipline during the 1990s, we lost our way in the decade that followed. We increased spending dramatically for two wars and an expensive prescription drug program — but we didn’t pay for any of this new spending. Instead, we made the problem worse with trillions of dollars in unpaid-for tax cuts — tax cuts that went to every millionaire and billionaire in the country.” — President Obama, April 13, 2011 Obama, in a speech on budget policy last month, offered this summary of how he thought the nation lost its way fiscally during the presidency of George W. Tax cuts are estimated to have totaled $2.8 trillion, which we guess would count as “trillions,” as the president put it. (In case you are wondering, the cost of the Iraq and Afghanistan wars was $1.26 trillion through 2011 and the Medicare prescription drug program totaled $272 billion.) The Facts The Bottom Line

SourceWatch Koch Spy Agency Led by Voter Fraud Huckster The Kochs have been complaining about a "lack of civility in politics" as they seek to boost their public image--but one of their top operatives helped propel perhaps the most egregious case of race-baiting voter fraud hucksterism in recent years. At the same time that the Kochs have been on a PR blitz, publicly spinning an image of themselves as well-intentioned patriots trying to make the world a better place and decrying "character assassination," they've been quietly ramping up a clandestine surveillance and intelligence gathering operation focused on their perceived political enemies, Ken Vogel reports at Politico. At the helm of this "competitive intelligence" operation is a man named Mike Roman, Vice President of Research for Kochs' Freedom Partners and who was paid $265,000 last year, according to Freedom Partners' recent tax filing. Kochs' Freedom Partners Spent $129M in 2014, Invested Massively in Voter Data Lists Rep. Ben Carson