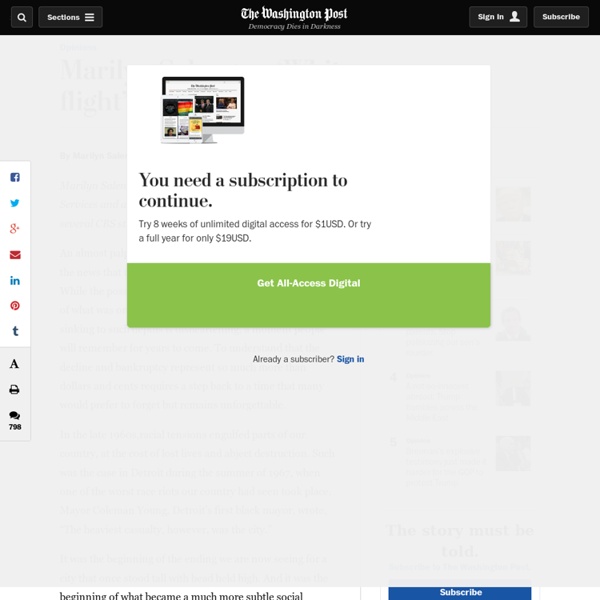 By Marilyn Salenger By Marilyn Salenger July 21, 2013 Marilyn Salenger is president of Strategic Communications Services and a former correspondent and news anchor for several CBS stations. An almost palpable sadness has swept across the country at the news that the city of Detroit has filed for bankruptcy. While the possibility of this had been discussed, the reality of what was once the fourth-largest city in the United States sinking to such depths is disheartening, a moment people will remember for years to come. To understand that the decline and bankruptcy represent so much more than dollars and cents requires a step back to a time that many would prefer to forget but remains unforgettable. In the late 1960s,racial tensions engulfed parts of our country, at the cost of lost lives and abject destruction. It was the beginning of the ending we are now seeing for a city that once stood tall with head held high. opinions Orlando Shooting Updates post_newsletter348 follow-orlando true after3th

Detroit and Deindustrialization This article is from Dollars & Sense: Real World Economics, available at This article is from the September/October 2013 issue of Dollars & Sense magazine. Questions and Answers with Barry Bluestone By Barry Bluestone | September/October 2013 The New* Detroit: How gentrification has changed Detroit's economic landscape When Shelby Oberstaedt was a kid, her suburban family was hesitant to travel downtown to attend Detroit Tigers games, fearing a reputation that painted the city as crime-ridden. And while living downtown as her now-husband played football at Wayne State University, she said, those same feelings of insecurity remained. “Living here was a bit scary,” she recalled.

Detroit Redlining Map 1939 Part of Detroit’s history of racial discrimination is comprised on housing discrimination, which in turn contributed to job discrimination, interpersonal racism, and continued racial inequity of opportunity. These areas of Detroit were targeted for “urban renewal” in the 1960s which displaced thousands of black residents to public housing complexes. Today these areas of Detroit have more vacancy (see map) than others either because the redlined properties were managed by slumlords whose properties deteriorated (see map) more quickly or from renewal efforts that didn’t consider the displacement of black residents. The racial divisions we see in our neighborhoods today are the result of deliberate actions taken in the past. (State of Opportunity)

Whites moving to Detroit, city that epitomized white flight DETROIT — Whites are moving back to the American city that came to epitomize white flight, even as blacks continue to leave for the suburbs and the city’s overall population shrinks. Detroit is the latest major city to see an influx of whites who may not find the suburbs as alluring as their parents and grandparents did in the last half of the 20th century. Unlike New York, San Francisco and many other cities that have seen the demographic shift, though, it is cheap housing and incentive programs that are partly fueling the regrowth of the Motor City’s white population. “For any individual who wants to build a company or contribute to the city, Detroit is the perfect place to be,” said Bruce Katz, co-director of the Global Cities Initiative at the Washington-based Brookings Institution. “You can come to Detroit and you can really make a difference.”

Anatomy of Detroit’s Decline - Interactive Feature Mayor Coleman A. Young of Detroit at an event in 1980. Richard Sheinwald/Associated Press Detroit Bankrupt: To See Detroit's Decline, Look at 40 Years Of Federal Policy In 1960, the richest per capita city in America, according to the U.S. Census Bureau, was Detroit. Today Detroit has filed for bankruptcy, the largest American city to do so. Downtown Detroit sales prices rise to 'insane' levels Prices rising for downtown Detroit living John Gallagher Detroit Free Press Greater downtown Detroit residential real estate — a near-dead market only a few years ago — is now soaring with a few property owners even listing their downtown and Midtown properties for fantasy prices running into the millions of dollars. But beneath some of the ridiculous pricing, greater downtown is offering a steady stream of residential openings as prices surge amid downtown's continued revival. The surge is fueled mostly by empty-nest baby boomers, along with some millennials, who are paying prices approaching $300 a square foot for upscale condos — levels unheard of just a few years ago.

Detroit’s Bankruptcy Reflects a History of Racism This is black history month. It is also the month that the Emergency Manager who took political power and control from the mostly African American residents of Detroit has presented his plan to bring the city out of the bankruptcy he steered it into. This is black history in the making, and I hope the nation will pay attention to who wins and who loses from the Emergency Manager’s plan. Black people are by far the largest racial or ethnic population in Detroit, which has the highest percentage of black residents of any American city with a population over 100,000.

The Threat to Detroit’s Rebound Isn’t Crime or the Economy, It’s the Mortgage Industry As a young married couple, Steven and Corey Josephson chose to begin their lives together in Detroit. They came from Greeley, Colorado, a city that couldn’t be more different. It was founded as an experimental utopian community; its majority-white population has more than doubled since 1970; and its unemployment rate is lower than the national average, and about half that of Detroit.

Detroit's Staggering Murder And Violent Crime Rate Are 'A Public Health Issue' Following news that Detroit was exiting bankruptcy and officials talking with optimism about the road ahead, grim new statistics drive home how much there is to do before the city’s future truly appears bright. Detroit has the highest murder and violent crime rate of any major city in the country, according to the FBI. FBI Uniform Crime Reporting statistics released Monday show that Detroit logged 316 murders and non-negligent manslaughters last year, with a rate of 45 per 100,000 people. That’s the highest of U.S. cities with more than 200,000 residents and 10 times the national rate.