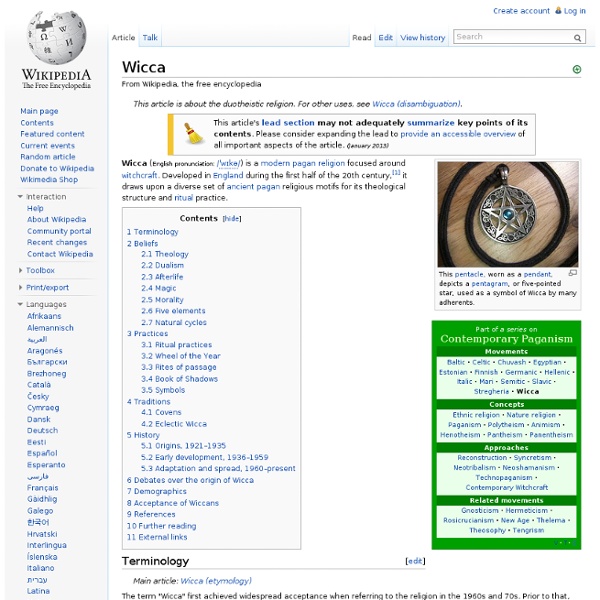 This pentacle, worn as a pendant, depicts a pentagram, or five-pointed star, used as a symbol of Wicca by many adherents. Wicca is a diverse religion with no central authority or figure defining it. It is divided into various lineages and denominations, referred to as traditions, each with its own organisational structure and level of centralisation. Due to its decentralized nature, there is some disagreement over what actually constitutes Wicca. Some traditions, collectively referred to as British Traditional Wicca, strictly follow the initiatory lineage of Gardner and consider the term Wicca to apply only to such lineaged traditions, while other eclectic traditions do not. Terminology[edit] Application of the word Wicca has given rise to "a great deal of disagreement and infighting". Beliefs[edit] Beliefs vary markedly between different traditions and individual practitioners. Theology[edit] Duotheism[edit] The God and the Goddess[edit] Pantheism, polytheism and animism[edit] Afterlife[edit]

Eckankar The Eckankar "EK" symbol Temple of ECK, Chanhassen, Minnesota Eckankar is a religious movement first organized by Paul Twitchell in 1965. The personal experience of the "Light and Sound of God" is one of the aims of the many spiritual exercises that are delineated in the numerous books available to the general public as well as in the discourses accessible to members only. Eckankar followers believe it provides an individual spiritual path to an understanding of self as eternal Soul and the development of higher states of consciousness. Followers of Eckankar commonly refer to themselves as "Eckists".

Introduction to Hindu Mythology Hindu religion is more philosophy than doctrine. There is no authoritative hierarchy of clergy; the religion is highly decentralized with multiple sects, perfectly acceptable to Hinduism (in contrast to the regrettable divisions within Christianity). The Hindu claim that there are different paths for each person.

Theophany Theophany (from Ancient Greek (ἡ) θεοφάνεια theophaneia,[1] meaning "appearance of a god") refers to the appearance of a deity to a human or other being.[2][3][4] This term has been used to refer to appearances of the gods in the ancient Greek and Near Eastern religions. While the Iliad is the earliest source for descriptions of theophanies in the Classical tradition/era (and they occur throughout Greek mythology), probably the earliest description of a theophany is in the Epic of Gilgamesh.[5] The term theophany has acquired a specific usage for Christians and Jews with respect to the Bible: It refers to the manifestation of God to people; the sensible sign by which the presence of God is revealed. Only a small number of theophanies are found in the Hebrew Bible, also known as the Old Testament.

Gerald Gardner (Wiccan) - Wikipedia Born into an upper-middle-class family in Blundellsands, Lancashire, Gardner spent much of his childhood abroad in Madeira. In 1900, he moved to colonial Ceylon, and then in 1911 to Malaya, where he worked as a civil servant, independently developing an interest in the native peoples and writing papers and a book about their magical practices. After his retirement in 1936, he travelled to Cyprus, penning the novel A Goddess Arrives before returning to England. Settling down near the New Forest, he joined an occult group, the Rosicrucian Order Crotona Fellowship, through which he claimed to have encountered the New Forest coven into which he was initiated in 1939. Believing the coven to be a survival of the pre-Christian Witch-Cult discussed in the works of Margaret Murray, he decided to revive the faith, supplementing the coven's rituals with ideas borrowed from Freemasonry, ceremonial magic and the writings of Aleister Crowley to form the Gardnerian tradition of Wicca.

Hermeticism Not to be confused with Hermit. Hermeticism, also called Hermetism,[1][2] is a religious and philosophical/esoteric tradition based primarily upon writings attributed to Hermes Trismegistus ("Thrice Great").[3] These writings have greatly influenced the Western esoteric tradition and were considered to be of great importance during both the Renaissance[4] and the Reformation.[5] The tradition claims descent from a prisca theologia, a doctrine that affirms the existence of a single, true theology that is present in all religions and that was given by God to man in antiquity.[6][7] Many Christian writers, including Lactantius, Augustine,[8] Thomas Aquinas[citation needed], Marsilio Ficino, Giovanni Pico della Mirandola, Giordano Bruno, Campanella, Sir Thomas Browne, and Emerson, considered Hermes Trismegistus to be a wise pagan prophet who foresaw the coming of Christianity.[9][10] History[edit] Late Antiquity[edit] Renaissance[edit]

Neo-Druidism Neo-Druidism or Neo-Druidry, commonly referred to as Druidry by many adherents,[1][2][3] is a form of modern spirituality or religion that generally promotes harmony and worship of nature, and respect for all beings, including the environment. Many forms of modern Druidry are Neopagan religions, whereas some are instead seen as philosophies that are not necessarily religious in nature.[4][5] Originating in Britain during the 18th century, Druidry was originally a cultural movement, only gaining religious or spiritual connotations in the 19th century. The core principle of Druidry is respect and veneration of nature, and as such it often involves participation in the environmental movement. Another prominent belief amongst modern Druids is the veneration of ancestors, particularly those who belonged to prehistoric societies. Beliefs[edit]

Dattatreya - Wikipedia Dattatreya (IAST: Dattātreya, Sanskrit: दत्तात्रेय) or Dattā is a paradigmatic Sannyasi (monk) and one of the lords of Yoga in Hinduism.[1] In many regions of India and Nepal, he is considered a deity. In Maharashtra, he is a syncretistic deity, considered to be an avatar (incarnation) of the three Hindu gods Brahma, Vishnu, and Shiva, collectively known as Trimurti.[2] In other regions, and some versions of texts such as the Garuda Purana, Brahma Purana and Sattvata Samhita, he is an avatar of Vishnu. His iconography varies regionally. Several Upanishads are dedicated to him, as are texts of the Advaita Vedanta-Yoga tradition in Hinduism.[10] One of the most important texts of Advaita Vedanta, namely Avadhuta Gita (literally, "song of the free") is attributed to Dattatreya. In Maharashtra, an annual festival in the Hindu calendar month of Mārgaśīrṣa (November/December) reveres Dattatreya and this is called Datta Jayanti.[13] Life[edit]

Reincarnation Reincarnation is the religious or philosophical concept that the soul or spirit, after biological death, begins a new life in a new body that may be human, animal or spiritual depending on the moral quality of the previous life's actions. This doctrine is a central tenet of the Indian religions.[1] It is also a common belief of various ancient and modern religions such as Spiritism, Theosophy, and Eckankar and is found in many tribal societies around the world, in places such as Siberia, West Africa, North America, and Australia.[2] In recent decades, many Europeans and North Americans have developed an interest in reincarnation.[6] Contemporary films, books, and popular songs frequently mention reincarnation. In the last decades, academic researchers have begun to explore reincarnation and published reports of children's memories of earlier lives in peer-reviewed journals and books.

Scientology - Wikipedia Hubbard's groups have encountered considerable opposition and controversy.[13] In January 1951, the New Jersey Board of Medical Examiners brought proceedings against Hubbard's Dianetics Foundation on the charge of teaching medicine without a license.[14] Hubbard's followers engaged in a program of covert and illegal infiltration of the U.S. government.[15][16] Hubbard-inspired organizations and their classification are often a point of contention. Germany classifies Scientology groups as an "anti-constitutional sect" (verfassungsfeindliche Sekte).[17][18] In France, Scientology groups have been classified as a cult by some parliamentary reports.[19][20][21][22][23][24][25] History

Adept An adept is an individual identified as having attained a specific level of knowledge, skill, or aptitude in doctrines relevant to a particular author or organization. Etymology[edit] The word "adept" is derived from Latin adeptus 'one who has attained' (the secret of transmuting metals).[1] Authors[edit] H. P. Scientology Scientology is a body of beliefs and related practices created by science fiction writer L. Ron Hubbard (1911–1986), beginning in 1952 as a successor to his earlier self-help system, Dianetics.[6] Hubbard characterized Scientology as a religion, and in 1953 incorporated the Church of Scientology in Camden, New Jersey.[7][8] A large number of organizations overseeing the application of Scientology have been established,[28] the most notable of these being the Church of Scientology. Scientology sponsors a variety of social-service programs.[28][29] These include the Narconon anti-drug program, the Criminon prison rehabilitation program, the Study Tech education methodology, the Volunteer Ministers, the World Institute of Scientology Enterprises, and a set of moral guidelines expressed in a booklet called The Way to Happiness.[30] Scientology is one of the most controversial new religious movements to have arisen in the 20th century.

Chaldean Astrology he early kingdoms of Mesopotamia, in the area now known as modern day Iraq, basically consisted of Babylonia on the southern plain and Assyria in the northern. Earlier references to Chaldea are not known but the territory seems to have been settled by semi-nomads from Arabia, who occupied Ur, “of the Chaldeans” and the neighboring territories. The first known reference to the name Chaldea, is found in the annals of Ashirnasirpal II, king of Assyria (884 to 859 BC). The land of Chaldea is located south of early Babylonia and borders the head of the Persian Gulf between the Arabian Desert and the delta of the Euphrates. The Assyrians called the area, now known as Southern Iraq, Kaldu and by the Babylonians, Kasdu. The Assyrians, who came on the scene about 1000 years later, quickly became a leading power owing to their military and administrative skills.

Emerald Tablet An imaginative 17th century depiction of the Emerald Tablet from the work of Heinrich Khunrath, 1606. The Emerald Tablet, also known as the Smaragdine Table, or Tabula Smaragdina, is a compact and cryptic piece of Hermetica reputed to contain the secret of the prima materia and its transmutation. It was highly regarded by European alchemists as the foundation of their art and its Hermetic tradition.