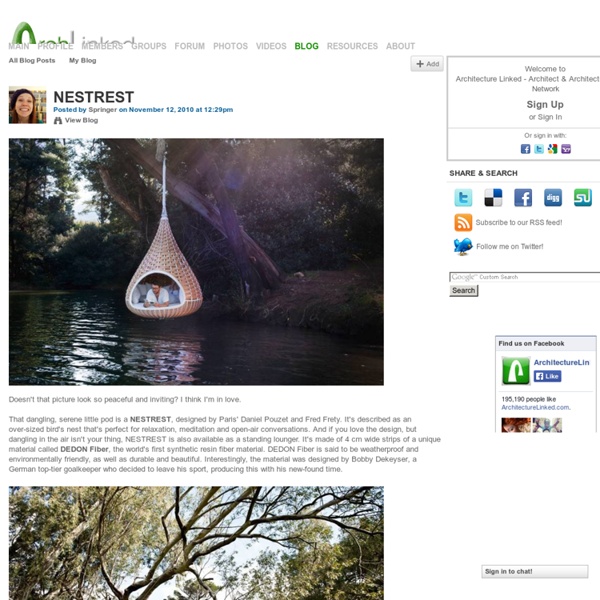 Doesn't that picture look so peaceful and inviting? I think I'm in love. That dangling, serene little pod is a NESTREST, designed by Paris' Daniel Pouzet and Fred Frety. It's described as an over-sized bird's nest that's perfect for relaxation, meditation and open-air conversations. And if you love the design, but dangling in the air isn't your thing, NESTREST is also available as a standing lounger. It's made of 4 cm wide strips of a unique material called DEDON Fiber, the world's first synthetic resin fiber material.

An Abandoned Country Estate in Yonkers – Rent Alder Manor For Film Shoots & Events Note: I DO NOT KNOW ANYTHING ABOUT ALDER MANOR AND WEDDINGS!! I’ve tried to figure it out, but the person in charge of weddings has never called me back, and it remains a complete mystery. I receive emails daily complaining about a lack of response for weddings, and I just don’t understand the situation. Very sorry! It sits on a hill just outside of New York City, completely empty and, for years, decaying and nearly forgotten… This is Alder Manor, and it’s without question one of the most amazing places I’ve ever had the pleasure of scouting.

Light Light's Sublime Levitating Lamps Posted by Ray | 30 Sep 2011 | Comments (9) Designer Angela Jansen of Design Academy Eindhoven recently collaborated with engineer Ger Jansen on a pair of skeuomorphic LED lamps that they're currently selling as Light Light. Their website knowingly notes that "It is uncommon for engineers to find good domestic applications for their technology... and it is likewise rare for designers of consumer objects to embrace cutting-edge technology wholeheartedly." Which, of course, is "perhaps what makes the cross-pollination of ideas between Angela Jansen and Ger Jansen so remarkable." The Light Light series creates an incredible visual conversation piece.

New York City's Dragonfly A Locavore Wet Dream Photo courtesy of: Vincent Callebaut Architectures Architect Vincent Callebaut will have locavores drooling if his 128-floor vertical farm concept is actually realized. The Dubai-esque Dragonfly addresses issues like food production and agriculture in cities that are horizontally-challenged for space like New York City. The concept supports housing, offices, laboratories and twenty-eight different agricultural fields. Set at the Southern bank of New York's Roosevelt Island, the Belgium-designed Dragonfly consists of two towers and is completely Hobbit free. It's a 2,000 foot tall structure that harnesses both solar and wind power.

Weird and Wacky Furniture By Straight Line Designs EmailEmail Straight Line Designs is a one-of-a-kind workshop that has been operating out of Vancouver, British Columbia for the past 25 years. In addition to installations, sculptures and private commissions, designer Judson Beaumont and his staff of eight full-time craftspeople have designed and constructed a variety of wacky cartoon-style furniture and projects for public institutions and children’s exhibitions throughout North America and abroad. Focused on quality and custom design, Judson’s studio stays far away from mass production and is as imaginative as children themselves. Website: StaightLineDesigns.com 1. Fridge concept on Industrial Design Served Fridge concept Outside surface of the fridge looks like compositionwith right and clear geometry. There is light on the doors, that also showswhen the fridge is on. When the door is open light is switching on and off.In this project all elements have new places. Thefirst new thing is an inclined triangle shelf for comfortable keeping the bottlesthere. In this way cellar can be created, or it can be just a place for juice.The next new thing is a movable shelf. Such systemhelps to solve some problems and use the fridge in a more comfortable manner.You can move the shelf and take what you want ( for comfort there are specialholes for fingers)One more interesting thing is a shelf with changingheight.

Search #d9e8c3 #ced181 #7c8f50 Space Saving Furniture Welcome to our section of the Web, and thank you for choosing us to fill your needs for contemporary furniture . With us you're guaranteed to find affordable modern furniture suitable for your avant-garde 21st century lifestyle and home. Whether you live in a house, apartment, loft or condo, our beautiful lines of modern chairs and modern sofas will fill your seating needs. Kitchen Cabinet by He Ruimin My Kitchen Is A Cabinet! Really No Kidding, but if I were to listen to He Ruimin then my kitchen would be just a cabinet with everything imaginable within it. Refrigerator, electric cook top, garbage bin, storage, and indicator lights on the fridge and stove to warn me about hot and cold surfaces! Good for the LOHAS gang, this concept makes me smile and frown. Smile because I think its and neat idea for restricted homes, and frown because I love elaborate big kitchens!

Firefly Solar Lamp Table by Vuk Dragovic & Yanko Design Replacing Candle-lit Dinners With Firefly The Firefly Table is honestly a very neat concept that I can foresee being snapped into production. Intended for outdoor cafés and restaurants, the idea is to use a solar lamp instead of romantic candlelights for illumination. The centrally placed lamp pops up to emit a soft glow while projecting any form of branding (via stencils) to the floor-space below. A former Cement Factory is now the workspace and residence of Ricardo Bofill Image Courtesy of Ricardo Bofill Architect: Ricardo BofillProgram: Architectural offices /archives /model laboratory /exhibition space /Bofill's-apartment /guest rooms /gardensLocation: Barcelona, SpainTotal floor area: 3,100 square meters and gardensHouse area: 500 square metersDate Completed: 1975 There is nothing as good as an aged bottle of wine; and in this case the aged bottle of wine is a project which was completed in 1975, but is still worth mentioning! First and foremost we would like to thank our friend and founder of Room Service design store in Greece, Katerina Xynogala for providing us with the necessary information regarding The Cement Factory, which is featured in the latest Room Service catalogue. The Cement Factory was discovered in 1973, it was an abandoned cement factory and partially in ruins, comprised of over 30 silos, underground galleries and huge engine rooms; Ricardo Bofill bought it and began renovation works.

Crowdfunding Site Kickstarts Unusual Tech - The Kickstarter website allows innovators to post ideas for new gadgets or innovations. - Visitors to the site can contribute to help fund the research and development. If you wanted to see the newest gadget or technological advance on the block, you used to go to the Consumer Electronics Show in Las Vegas or CeBIT in Germany. But now there's Kickstarter. Have a Break ... In a Kit Kat Chair? Here's something we haven't seen before: adverts that transform into chairs, no tools required! Thrown up around a handful of Gen-Yer haunts in New Zealand recently, these flat-pack plywood posters, each a DIY project in waiting, are the latest gimmick experimental ad campaign from Kit Kat -- like a grown-up version of a cereal-box toy. Except more useful. They can be assembled in a few minutes by pulling off the poster's six wood pieces then slotting them together.

Texture Packs Jun 02 2010 By By Janos Racz Every designer knows the importance of using the right textures in designs. Free Texture Packs To Spice Up Your Designs - Noupe Design Blog - StumbleUpon Feb 25 2011 Every day we try our best to present to you some useful tips, dear reader, to inspire you with fresh ideas and to try out new things. Today, we’ve prepared a nice collection of free texture packs that you just may have been looking for to freshen up your designs you’re working on.