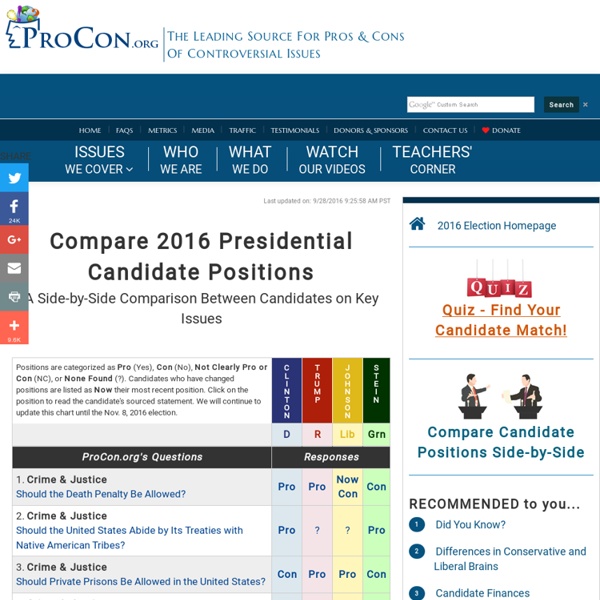 What’s at Stake CLINTON favors raising the federal minimum wage to $12 an hour and providing more tax breaks for working families. She wants the wealthiest Americans to pay higher taxes. She also wants the government to spend more on infrastructure projects like roads and bridges to provide jobs and grow the economy. TRUMP says the U.S. needs to renegotiate its trade deals to make them more beneficial to American companies and workers. CLINTON supports broad immigration reform and, like President Obama, says she favors protections for certain groups of undocumented immigrants, including young people brought here illegally as children. TRUMP promises to build a wall along the U.S. CLINTON believes climate change is an “urgent threat.” TRUMP believes climate change is “a total hoax.” CLINTON wants to step up airstrikes against ISIS and help local forces defeat them. TRUMP has promised to defeat ISIS by taking away the oil that funds the terrorist group.

8 Parents Who Punished Their Own Bullying Kids The mother who shaved her daughter's head as punishment for "bullying a cancer patient" Bizarre footage has emerged of a mother appearing to shave her daughter's hair as a form of unusual and — some would argue — cruel punishment. The "scary shave" was one woman's reaction to her daughter bullying a bald cancer patient. In the disturbing video, the girl can be seen sitting in a bathtub, crying and screaming as large clumps of hair are shaved off. Her mother can also be seen speaking to her daughter calmly while she runs the razor through the girl's hair. The footage went viral on social media with the caption, “This girl bullied another girl at her school who has cancer, so her mom decided to shave her head.” (Source) The mom who punished her 8-year-old by making him hold a sign calling himself a bully An Oklahoma mom made her 8-year-old son stand holding a sign reading: “I picked a fight because I'm a bully." According to Malachi, he and the other boy were fighting over a girl. (Source)

Flag timeline Adoption of State Flag Desecration Statutes — By the late 1800's an organized flag protection movement was born in reaction to perceived commercial and political misuse of the flag. After supporters failed to obtain federal legislation, Illinois, Pennsylvania, and South Dakota became the first States to adopt flag desecration statutes. By 1932, all of the States had adopted flag desecration laws. In general, these State laws outlawed: (i) placing any kind of marking on the flag, whether for commercial, political, or other purposes; (ii) using the flag in any form of advertising; and (iii) publicly mutilating, trampling, defacing, defiling, defying or casting contempt, either by words or by act, upon the flag. Compare the candidates: Clinton vs. Trump on immigration Editor's note: This is the first in a series of stories comparing the candidates' positions on major policy issues. Presidential candidates Donald Trump and Hillary Clinton have taken opposite roads on their quest for immigration reform. Trump calls for mass deportations, migrant bans and a wall to keep away people from coming into the country, while Clinton wants a pathway to citizenship, immigrant integration and protection from deportation. Trump and Clinton both say they favor secure borders, but in every other respect they are at odds over how they’d tackle key immigrant issues. Frank Sharry, executive director of America’s Voice, which supports immigrant rights and comprehensive immigration reform, calls Trump "the most hardcore anti-immigrant" presidential candidate in modern American history. "Let’s not normalize what Trump is proposing. "She’s putting forward the most radical immigration plan ever put down on paper by a candidate," Krikorian said. Donald Trump 1. 2. 3. 1. 2. 3.

Donald Trump Can’t Shut Down New York Times Tax-Leak Showing He Lost Nearly $1 Billion in 1995 Trump’s lawyer pledged “prompt initiation of appropriate legal action” against the Times, saying the Oct. 1 story was “illegal” because Trump did not authorize the release of his confidential tax returns. What is the “appropriate” legal action? None. Even my journalism students in my entry-level media law class know that the First Amendment provides an absolute legal shield to journalists who are sued for publishing lawfully obtained documents that are a matter of public concern. The U.S. The internet is blowing up with stories saying that the Times could be prosecuted criminally under federal tax law 26 U.S. Watch: So Does Trump's Tax Maneuvering Make Him A Genius Or Irresponsible? Which takes us back to Bartnicki, where the Supreme Court ruled that the government could not punish a radio journalist for airing an illegally taped phone call because the journalist received the tape from a third-party and the tape was a matter of public concern. Thank You!

Where They Stand on Economic Issues Jobs and Income Many Americans have grown anxious that the economy hasn’t lived up to its promise over the past 15 years of creating job growth that provides upward mobility and broadly shared prosperity. Instead, the nation has gone through two recessions marked by bubbles—one in the stock market and the other in housing—that were followed by recoveries in which economic growth returned but job growth lagged. Laying out a vision for how to restore widespread job and income gains is shaping up to be the top priority of the incoming president. Donald Trump If we do what we have to do correctly, we can create the biggest economic boom in this country since the New Deal when our vast infrastructure was first put into place. It's a no-brainer. Mr. Mr. Hillary Clinton Previous generations of Americans built the greatest economy and strongest middle class the world has ever known on the promise of a basic bargain: if you work hard and do your part, you should be able to get ahead. Mrs. Mr.

Government to protect Armed Forces from persistent legal claims in future overseas operations 4 October 2016 The Government will protect our Armed Forces from persistent legal claims by introducing a presumption to derogate from the European Convention on Human Rights (ECHR) in future conflicts, the Prime Minister and the Defence Secretary have announced. Over the past decade a series of court judgments have extended the extra-territorial jurisdiction of the European Convention on Human Rights to the battlefield. Military advisers warn that this risks seriously undermining the operational effectiveness of the Armed Forces. The intention to derogate from the ECHR, if possible in the circumstances that exist at that time, will protect British troops serving in future conflicts from the kind of persistent legal claims that have followed recent operations in Iraq and Afghanistan on an industrial scale. Prime Minister Theresa May said: "Our Armed Forces are the best in the world and the men and women who serve make huge sacrifices to keep us safe." Defence Secretary Michael Fallon said:

Fun facts about Clinton and Trump – Lesson Plan | Lesson Plan | PBS NewsHour Extra Much of the media’s coverage of presidential candidates typically focuses on either the candidates’ policy stances or image. In addition to the issues, it’s fun to know some interesting facts about each candidate. Brush up on your knowledge of where Hillary Clinton and Donald Trump stand on the issues and learn some lesser-known trivia about them with this lesson plan. Subjects Social studies, history, government Estimated Time 1-2 50 minute classes Grade Level Activities: Get to know where the presidential candidates stand on the important issues with these PBS NewsHour ‘What the presidential candidates believe’ articles. Donald Trump: Hillary Clinton: As a young child, Clinton wrote a letter to NASA inquiring about how she could become an astronaut. Extension Activities: In a small group, discuss the following questions: Does media coverage of presidential candidates make them appear distant from the general population? Take this ISideWith.com quiz to assess your views on the issues.

Compare the Candidates: Where Do Clinton and Trump Stand on Education Issues? July 15, 2016 | Updated: August 2, 2016 The Democratic nominee for president, Hillary Clinton, and Republican nominee Donald Trump have yet to release comprehensive K-12 policy plans. To give a sense of where they stand, Education Week reviewed their statements, proposals, and positions on a dozen education policy issues, from school choice to school safety. Some material is drawn from their 2016 presidential campaigns, some from before they began their current quests for the White House. For a review of the education records and statements from other parties' presidential candidates, including the Green Party’s presumptive nominee Jill Stein and Libertarian Party nominee Gary Johnson, click here. Select a Topic Academic Standards Bullying Candidate Background College Access Early-Childhood Education Every Student Succeeds Act School Choice School Construction School Safety & Climate School Spending Teacher Quality Testing U.S.

Watch These Awkward Elevator Rides From an Old Episode of Candid Camera Elevator rides can be awkward. The tiny space forces passengers into close quarters as they slowly scale up and down buildings. In this clip from a '60s episode of the American hidden camera show Candid Camera, the first unsuspecting rider, a middle-aged man in a trench coat, gets an even more unusual elevator experience. As other passengers follow behind him the man finds all of them oddly facing the back wall. “You’ll see how this man in the trench coat tries to maintain his individuality,” says the host of the show, Allen Funt. The man in the trench coat rubs his face and nose in confusion at the other passengers. In the 1960s, social conformity experiments got all the laughs. Today, psychologists and researchers still turn to and Asch’s experiments, the famous Candid Camera clip popularly shown in psychology classes. Wosmek and colleagues at Bethany Lutheran College replicated the elevator experiment in 2011, and found similar awkward situations seen in the 1962 clip.

Famous cartoonist made donkey and elephant the symbols of political parties Thomas Nast’s cartoon shows a donkey in a lion’s skin scaring an elephant and other animals. (Library of Congress) Why is the elephant the symbol of the Republican Party and a donkey the symbol of the Democrats? A very famous political cartoonist named Thomas Nast is credited with making these animals the symbols of their parties during the 1870s. (The donkey was first associated with the Democrats during the election of 1828, but it wasn’t until Nast used it in 1870 that many people began to link the Democrats with the donkey.) In 1874, Nast drew the cartoon shown above with a donkey wearing a lion’s skin and scaring all the other animals in the forest. Bonus fun fact: Nast was the first person to draw Santa Claus as a fat, bearded elf.