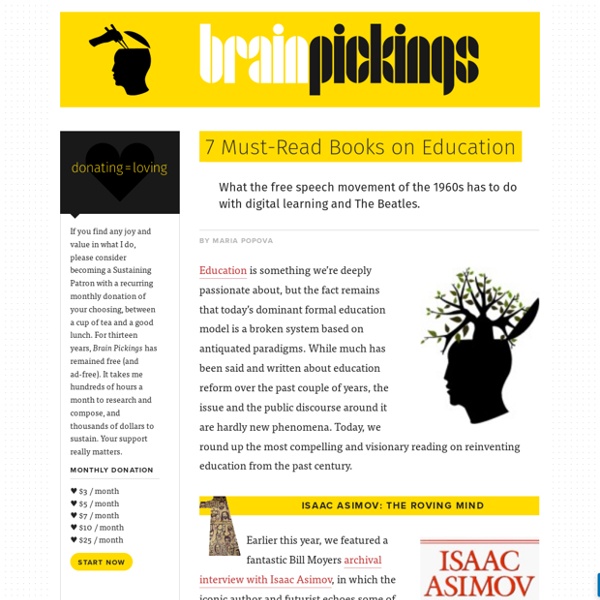 Education is something we’re deeply passionate about, but the fact remains that today’s dominant formal education model is a broken system based on antiquated paradigms. While much has been said and written about education reform over the past couple of years, the issue and the public discourse around it are hardly new phenomena. Today, we round up the most compelling and visionary reading on reinventing education from the past century. Earlier this year, we featured a fantastic Bill Moyers archival interview with Isaac Asimov, in which the iconic author and futurist echoes some of own beliefs in the power of curiosity-driven, self-directed learning and the need to implement creativity in education from the onset. Sir Ken Robinson’s blockbuster TED talks have become modern cerebral folklore, and for good reason — his insights on education and creativity, neatly delivered in punchy, soundbite-ready packages, are today’s loudest, most succinct rally cry for a much-needed revolution.

The Ancient Book of Sex and Science by Maria Popova The alchemy of erotica, or what’s making Walt Disney blush in his grave. This summer, four insanely talented Pixar animators — Scott Morse, Nate Wragg, Lou Romano, and Don Shank — got together and released a racy side project exploring, in broad color and evocative commentary, humanity’s most popular topic from the least likely of angles. The Ancient Book of Sex & Science was born. Permaculture « The Wild Green Yonder By Adam Brock The phrase “sustainable design” is often associated with things like bioplastic, solar-powered flashlights, or cradle-to-cradle office furniture. While these and other innovations continue to push the green design envelope, even the most forward-thinking ecoproducts can’t honestly be called sustainable quite yet: they’re still nowhere close to eliminating their negative impact on the planet. The good news, though, is that actual sustainable design is entirely possible. The trick is in redefining our notion of what “design” is: just like electricity generation and food production, the most sensible approach to design from an ecological standpoint is to decentralize. Contrary to what corporations would have you believe, there’s no reason we need to rely on mass-produced stuff to meet our needs.

Free to Learn: A Radical Experiment in Education (2006 Free to Learn is a 70 minute documentary that offers a “fly on the wall” perspective of the daily happenings at The Free School in Albany, New York. Like many of today’s radical and democratic schools, The Free School expects children to decide for themselves how to spend their days. The Free School, however, is unique in that it transcends obstacles that prevent similar schools from reaching a economically and racially diverse range of students and operates in the heart of an inner-city neighborhood.

Voices Keeping the Curriculum Context in Connected Classrooms Primary teacher Kathy Cassidy shares a year’s worth of ideas from her connected classroom about how to keep global learning activities in sync with curriculum goals and objectives. read more Passion-Based Learning, Week 6: Minecraft, Lego & Makerspaces Mindmapping: A Diagram is Worth a Thousand Thoughts « Novalawcity I often get frustrated when I’m brainstorming. Trying to come up with ideas, or see how related ideas interact can get very frustrating. Outlines and lists can work well, if your topic or interest is linear enough. But if not, what then?

The Ghost Map: Lessons in Epidemiology from Victorian London by Maria Popova What an ill Victorian infant has to do with the power of maps and the future of modern cities. At around 6AM on the morning of August 28, 1854, the Lewis infant started vomiting and excreting greenish stools with a pungent smell. Her mother gathered the soils in a bucket of tepid water and tossed them into the cesspool in the family cellar. So began the story of London’s most horrific epidemic, the Broad Street cholera outbreak. Adapting the Classroom Learning Environment written by: Elizabeth Wistrom • edited by: Elizabeth Stannard Gromisch • updated: 1/5/2012 The teacher should identify the learning difficulty of the disabled children using diagnostic assessments and classroom testing. Suitable arrangements should be made in the classroom to make the school environment effective for better learning and access for special needs students. As students move away from self-contained classrooms and into the regular education setting, you as the classroom teacher are not alone in wondering about adapting your school classroom for a disability. Student learning is your number one priority, and accessibility of both the space and lessons can be intimidating.

Magical Teaching This all began when I arrived at my portable classroom on the edge of campus ready to change the world with my magical teaching. I did my best to document the experience, keeping a slapdash journal on my laptop and writing notes on MasterCard junk mail, overdraft notices from the bank, and membership petitions from my college alumni association. Twelve years later, Mr. Smith Is Magic – And Other Fantasies of a First Year Teacher is done. 30 ways to use Twitter to accelerate learning How can Twitter be used to accelerate learning? Here are 30! 1. Provide tips daily. HydraText Videos HydraText is a web-based system that enables teachers to share the bits and pieces that make up a textbook or supplement, assemble them in their own way, and output to pdf and the web. The Hydra for each subject is a library of materials you and others have added that you can then assemble into a book or supplement - like creating a playlist for your music player. You can copy and rearrange someone else's materials or just parts of them, and create your own and share with others.

5 Timeless Commencement Addresses by Maria Popova Gifts vs. choices, the benefits of failure, and what calligraphy has to do with Apple’s success. It’s graduation season, so commencement addresses by actors, politicians, writers, musicians and other luminaries are sweeping the world of higher education across the entire spectrum of mediocrity and profound wisdom. Let’s use this as an invitation to remember some of the most compelling, provocative and deeply inspirational speeches of years past. Least Restrictive Educational Environment The Individuals with Disabilities Education Act (IDEA) requires that all children with disabilities must be educated in the least restrictive environment (LRE) that is appropriate for them. The spirit of this requirement is to ensure that children are not unnecessarily removed from the regular classroom or isolated from other non-disabled children of their age. LRE decisions are made based on children's learning needs and vary from child to child. IDEA also requires that schools provide a full continuum of services ranging from regular classrooms with support to special classes, and special school placements as needed.

The Benefits of a Classical Education Since the end of the Second World War, and especially since the mid-1960s, America has been deluged with seemingly endless stories of the failure of its educational system. Testing reveals that there exists a significant percentage of high-school graduates who cannot identify the Pacific Ocean on an unlabeled map of the world, who do not know that Abraham Lincoln served as president of the United States after George Washington, who confuse the American Civil War with World War I, and who believe that Christopher Columbus discovered the New World in the 18th century, which examples are typical of the horror stories repeated year after year. Ever fewer young people, even those who have graduated from colleges and universities, are properly able to express themselves verbally or in writing. In response, liberal educators have come up with various nostrums that were supposed to turn things around by means of revolutionary new teaching methods. Not surprisingly, they have all failed.