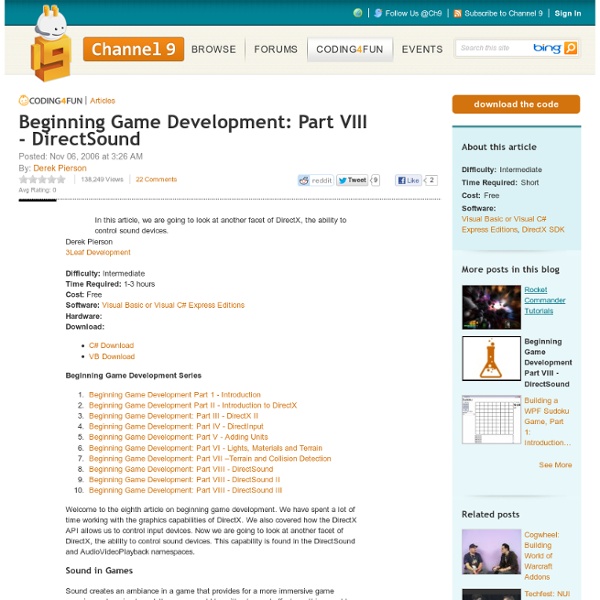 Welcome to the eighth article on beginning game development. We have spent a lot of time working with the graphics capabilities of DirectX. We also covered how the DirectX API allows us to control input devices. Now we are going to look at another facet of DirectX, the ability to control sound devices. This capability is found in the DirectSound and AudioVideoPlayback namespaces. Sound in Games Sound creates an ambiance in a game that provides for a more immersive game experience. Sound effects also provide the same audible cues we expect in real life, such as the direction and speed of a person approaching us based on the volume, direction, and frequency of the footsteps. In BattleTank2005 I want to integrate sound in the following way. Secondly, I want to be able to play background music during game play and I want to control what music plays when in the game. DirectSound The DirectSound namespace only supports playing 2 channel waveform audio data at fixed sampling rates (PCM). Device

How To Crack A Wi-Fi Network’s WPA Password With Reaver Your Wi-Fi network is your convenient wireless gateway to the internet, and since you’re not keen on sharing your connection with any old hooligan who happens to be walking past your home, you secure your network with a password, right? Knowing, as you might, how easy it is to crack a WEP password, you probably secure your network using the more bulletproof WPA security protocol. Here’s the bad news: A new, free, open-source tool called Reaver exploits a security hole in wireless routers and can crack most routers’ current passwords with relative ease. Here’s how to crack a WPA or WPA2 password, step by step, with Reaver — and how to protect your network against Reaver attacks.

Free All-in-One Graphic Design Starter Kit Graphic design has an amazing community. Comprised of both the vets from the pre-computer era to the newbies who were raised on the internet and computer-editing applications, there is a huge gamut of people sharing their work and expertise online. I know when I was starting out in design, I found tons of inspiration and information from sites like JustCreativeDesign, DesignNewz, and more. If there’s one issue, however, it’s that there’s almost too much great information out there. I know – good problem to have, right? But for those designers just starting out, or for those designers who are considering getting into design, the amount of information can be a little overwhelming.

7 Reasons You Should Use #Hashtags In Your Tweets - The Link Medic - Free Blogging Resources A hashtag is simply a keyword marked by the # symbol in front of it. In some geekier circles it’s known as an octothorp, which might be good to know if you’re appearing on Jeopardy. It is used to help categorize tweets and help you find similar ones using that topic’s tag. Invent Your Own Computer Games with Python - Chapters Chapter 1 Read online: Chapter 1 - Installing Python Videos: Chapter 2 Read online: Chapter 2 - The Interactive Shell Chapter 3 Removing an object on a photo with GIMP Tutorial to remove objects (or people) and restore the portion of the background they hide in a photo with the Resynthesizer plugin. An impressive video has been posted on Youtube to show how, with Photoshop, it is possible to delete objects in an image automatically, without any design work. The same can be done with The Gimp in fact and for longer (it is not impossible that the same algorithm has been reused). This plugin "re-synthesizes" the background" and rebuilds it from same elements on the photo.

The Hacker Manifesto by +++The Mentor+++ Written January 8, 1986 Another one got caught today, it's all over the papers. "Teenager Arrested in Computer Crime Scandal", "Hacker Arrested after Bank Tampering"... Damn kids. They're all alike. But did you, in your three-piece psychology and 1950's technobrain, ever take a look behind the eyes of the hacker? 50 Places You Can Learn to Code (for Free) Online If you’re curious about learning a programming language then you’re in luck: there’s no shortage of resources for learning how to code online. University-level courses, tutorials, cheat sheets, and coding communities all offer excellent ways to pick up a new language, and maybe even a new job, too. Read on, and you’ll discover 50 great places to learn how to code, for free, online. University

Creating a picture gallery with HTML5 canvas - Ubelly Displaying pictures in a gallery is something that so easy to do with one of the many jQuery Plugins, but what if you want to use the HTML5 canvas tag? Capital FM recently created a HTML5 showcase page called Be A Star and at the bottom they show off a rather fancy image gallery. The gallery uses HTML5 canvas and below I’m going to show how you can create something like this yourself. If you want to see how they also used CSS3 check this post out. Cast Thermite So you made it through the intro? Good. There's something that must be said before we go any further. I'm not liable. For anything. Do your homework and be sure you know what safety precautions to take when handling something like thermite, such as not looking at it during ignition since it gives off harmful ultraviolet light!

54 Amazing Military Photos From the pilot’s viewpoint: an F-15E Strike Eagle positions under the boom of a KC-135R Stratotanker during a training mission Dec. 17, 2010, over North Carolina. The F-15E is from the 335th Fighter Squadron from Seymour Johnson Air Force Base, N.C. (U.S. Air Force photo/Staff Sgt. Michael B. Nose drawing tutorial: a geometrical approach by Vincenzo Nose drawing can be a difficult skill to master due to the complexity of the nose shape. With this tutorial I will try to describe a method of defining a geometrical shape for the nose that should help notably its correct positioning on the face while maintaining correct orientation and proportion of the different parts. With this tutorial on nose drawing I am not going to enter into the anatomical detail of the nose and its inner structure but I intend to provide a quick way to rapidly block out a correctly positioned nose in a face drawn from any angle. Considering its general form, the nose is a triangular, wedge-shaped block narrow at its root and broad and prominent at its base in the mid region of the face. Examine this solid with attention, this will be the foundation of correctly drawing a nose.

Java Programming Cheatsheet This appendix summarizes the most commonly-used Java language features in the textbook. Here are the APIs of the most common libraries. Hello, World. Editing, compiling, and executing. Built-in data types. Declaration and assignment statements. 25 Books To Sharpen Your Social Skills (and Transform Your Career) Humans are strange creatures. Luckily, since you are one, you already have all the tools you need for getting along with them. Even though they come so naturally to some people, no one is born with the skills for fitting into society; these skills are learned over time. It’s never too late to improve your ability to meet people, make friends, and communicate. 10 Mind-Blowing Theories That Will Change Your Perception of the World Reality is not as obvious and simple as we like to think. Some of the things that we accept as true at face value are notoriously wrong. Scientists and philosophers have made every effort to change our common perceptions of it. The 10 examples below will show you what I mean. 1. Great glaciation.