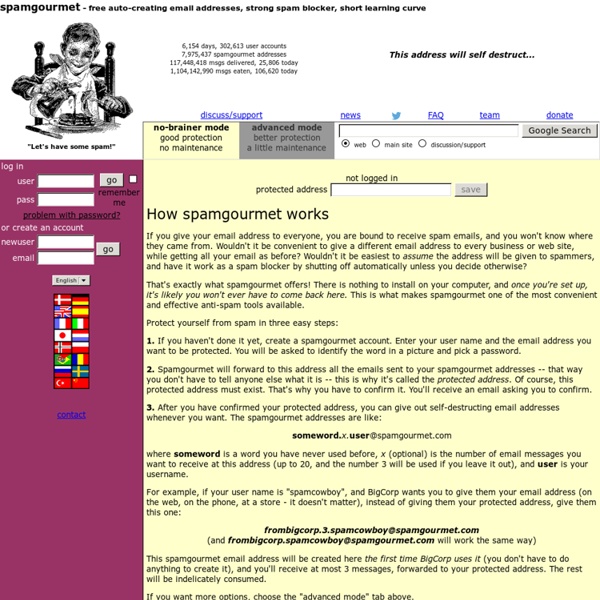 Melt Mail - Temporäre E-Mail Weiterleitung. Swedish Women Invent Awesome Invisible Bike Helmet This will change everything, folks. A couple of Swedish women invented an amazing new bike helmet to address the issue of ugly, uncomfortable plastic things that are total fashion don'ts. A professor who served as advisor has already told them, "You're going to be millionaires," and they very well might. The concept seems pretty complex, but allegedly it works. Basically it's totally awesome and everyone will want one. It's called the Hövding helmet, and so far it looks like it's only available from Swedish, Danish, and other European retailers. Now you can go out on the town in your hippest garments and ride your Public Bicycle through the Mission whilst looking cool and without fucking up your hair. [Jalopnik] [TechCrunch]

Disposable Temporary Email Addresses - AntiSpam Temporary Inbox at MailCatch.com - About Doorbell that tricks burglars into thinking you're home invented by schoolboy Laurence Rook, 13 By Lee Cain Updated: 08:20 GMT, 6 June 2011 Smart boy: Schoolboy Lawrence Rook, 13, invented Smart Bell, which calls your mobile when it is rung A schoolboy is on course for a £250,000 windfall after inventing a doorbell that fools burglars into believing somebody is home at an empty property. Smart Bell, designed by 13-year-old Laurence Rook, dials the homeowner's mobile phone when pressed, allowing them to talk to whoever is outside their front door. The device even produces a small amount of white noise to give any unexpected guest the impression they are speaking to someone inside the house on an intercom system. The invention, which uses an inbuilt SIM card and existing mobile-phone technology, would also allow homeowners to give instructions to drivers making deliveries at their property. Laurence has already sold 20,000 units to telecoms giant Commtel Innovate and is finalising a deal with an unnamed second company for a further 25,000 units.

spamfree24 - Einweg E-Mail/disposable email Croydon boy Laurence Rook invents phone-linked doorbell 7 June 2011Last updated at 16:15 Laurence Rook came up with the idea when his school held a competition A 13-year-old boy from south London has invented a doorbell which calls the householder if nobody answers the door. Laurence Rook, from Croydon, said he got thinking about his invention after his mother missed several deliveries. The doorbell, with a built-in Sim card and an intercom, calls the householder if no-one answers the door within eight seconds, allowing the visitor to speak directly to the householder. Laurence has already received orders worth up to £250,000 for the product. A Dragons' Den-style competition at his school, the Trinity School, led to him developing his idea further - but he could not enter the competition as his working prototype was not ready in time. Laurence, from Whyteleafe, said: "It started over a year ago when my mum was expecting a parcel to be delivered. 'Treat myself' Laurence has received orders of £250,000

TempEMail - Temporary, Disposable, Anonymous, email address 5 Top Tab Tips for Firefox Hello, my name is Carmen, and I am a super tab user on Firefox. Since my job is to give you some of the best tips and tricks for using Firefox here on The Den, I wanted to share my top tips for tabs. There are some settings in the Preferences window that I suggest you make sure are turned on (though there are more available that you may find useful.) You can see how to adjust your tab settings here. Open new windows in a new tab: If you have a lot of sites open at the same time, a lot of windows can mean things get buried and are hard to find. I like opening new windows in a tab instead. And there’s more… If you’re like me, you probably run out of space on the Tab Strip quickly. For the advanced tab user, there’s also a Firefox Add-on that I find useful. See?

Temporäre E-Mail-Adresse Windows Icons: Reference list with details, locations & images Good qual­ity icons and images, espe­cially ones with an alpha trans­par­ency can be time con­sum­ing to make, and are often also hard to find. One source of lots of high qual­ity icons in a range of sizes is Win­dows. Win­dows 7 includes lots of icons which can be use­ful as the major­ity are avail­able in sizes from 16×16 up to 256×256, and come with alpha trans­par­ency. Loc­a­tions of com­mon win­dows icons Ref­er­ence list of Win­dows Icons con­tained in dll and exe icon libraries The num­bers below each icon refer to the icon num­ber of the file, and the num­ber in brack­ets indic­ates how many vari­ants of the icon there are (there could be up to a the­or­et­ical max­imum of 20, with dif­fer­ent col­our depths and sizes. %windir%\system32\compstui.dll (Com­mon Prop­erty Sheet User Interface) %windir%\system32\ddores.dll (Device Cat­egory Inform­a­tion and Resources) %windir%\system32\ieframe.dll (Inter­net Explorer) %windir%\system32\imageres.dll (Win­dows Image Resource)