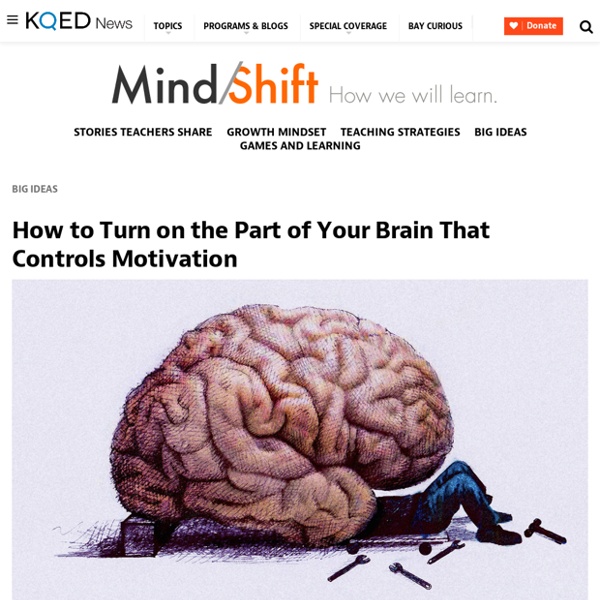 We know we should put the cigarettes away or make use of that gym membership, but in the moment, we just don’t do it. There is a cluster of neurons in our brain critical for motivation, though. What if you could hack them to motivate yourself? The researchers stuck 73 people into an fMRI, a scanner that can detect what part of the brain is most active, and focused on that area associated with motivation. When the researchers said “motivate yourself and make this part of your brain light up,” people couldn’t really do it. “They weren’t that reliable when we said, ‘Go! That changed when the participants were allowed to watch a neurofeedback meter that displayed activity in their ventral tegmental area. “Your whole mind is allowed to speak to a specific part of your brain in a way you never imagined before. Using an fMRI for this kind of brain feedback is more effective than other, older tools like placing electrodes on the skull or EEG, Gabrieli says. Copyright 2016 NPR.

How to Get Past Negativity Bias in Order to Hardwire Positive Experiences It’s helpful to know that the brain is plastic and can adapt to challenges. And when it comes to learning new things, we can build up mental resources through intentional effort. People can get better at realizing self-regulation, executive functions, a sense of perspective or meaning, positive emotions like gratitude, a sense of strength and the feeling of being cared about. “Any kind of mental activity, including experiences, entails underlying neural activity,” said Rick Hanson, a psychologist and senior fellow at the Greater Good Science Center at UC Berkeley, at a Learning & the Brain conference. He has developed practices to help people build up their mental capacity for happiness by creating patterns of neural activity that with time and repetition become neural pathways.

The Choice Explosion Lansing, W.Va. — A few years ago, the social psychologist Sheena Iyengar asked 100 American and Japanese college students to take a piece of paper. On one side, she had them write down the decisions in life they would like to make for themselves. On the other, they wrote the decisions they would like to pass on to others. Future - The best (and worst) ways to spot a liar Thomas Ormerod’s team of security officers faced a seemingly impossible task. At airports across Europe, they were asked to interview passengers on their history and travel plans. Ormerod had planted a handful of people arriving at security with a false history, and a made-up future – and his team had to guess who they were. In fact, just one in 1000 of the people they interviewed would be deceiving them. Identifying the liar should have been about as easy as finding a needle in a haystack.

Reuven Feuerstein Dr. Reuven Feuerstein, a clinical psychologist who studied at the University of Geneva under Jean Piaget, Andre Rey, Barbel Inhelder, and Marguerite Loosli Uster, went on to earn his Ph.D. in Developmental Psychology at the Sorbonne. He is currently the director of the Center for Development of Human Potential in Jerusalem. From 1970 until the present Dr. Feuerstein has served as Professor in the School of Education at Bar Ilan University in Ramat Gan, Israel; he is also the Director of the Hadassah-Wizo-Canada Research Institute, in Jerusalem, Israel (www.newhorizons.org/trm_feuerstein.html)

Character Day Character Day is an annual global day devoted to developing who we are and who we want to be in the world. Character Day 2016 is set for September 22! Sign up your school, classroom, organization, company, congregation, or family to participate. Ten Popular Mind Control Techniques Used Today The more one researches mind control, the more one will come to the conclusion that there is a coordinated script that has been in place for a very long time with the goal to turn the human race into non-thinking automatons. For as long as man has pursued power over the masses, mind control has been orchestrated by those who study human behavior in order to bend large populations to the will of a small “elite” group. Today, we have entered a perilous phase where mind control has taken on a physical, scientific dimension that threatens to become a permanent state if we do not become aware of the tools at the disposal of the technocratic dictatorship unfolding on a worldwide scale. Modern mind control is both technological and psychological.