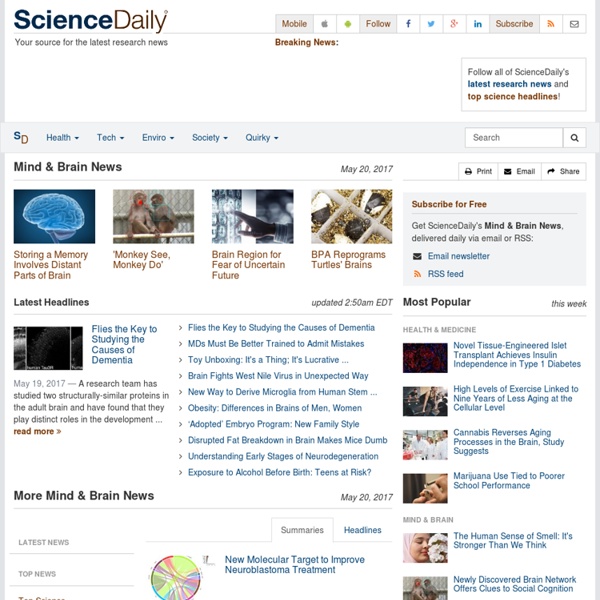 May 19, 2017 — A new study has served to identify some genetic mutations that will help to improve the treatment of ... read more May 19, 2017 — Scientists have made an important step in understanding the organization of nerve cells embedded within the gut that control its function -- a discovery that could give insight into the origin of ... read more Scientists to Test Zika Virus on Brain Tumors May 19, 2017 — In a revolutionary first, scientists will test whether the Zika virus can destroy brain tumor cells, potentially leading to new treatments for one of the hardest to treat cancers. ... read more Female Faculty Face Strong Glass Ceiling in Male-Dominated University Environments, Study Concludes May 18, 2017 — Female faculty members hoping to advance to the highest ranks of academia face significant barriers due to male-dominated environments at colleges and universities, according to a new ... read more Consumers See Much Greater Risk Than Reward in Online Ads

Recent Articles Most Recent Thoughts Derailed By Tanya Lewis | April 18, 2016 The same brain mechanism by which surprising events interrupt movements may also be involved in disrupting cognition, according to a study. 0 Comments Analyzing resting brain scans, researchers can anticipate the brain activities of a person performing a range of tasks. Brain Information, Facts Making sense of the brain's mind-boggling complexity isn't easy. What we do know is that it's the organ that makes us human, giving people the capacity for art, language, moral judgments, and rational thought. It's also responsible for each individual's personality, memories, movements, and how we sense the world.

Why Aspirin May be the Most Powerful Weapon in the War on Brain Cancer Less than 20 percent of people with brain cancer survive more than five years after their diagnosis. It’s one of the most deadly forms of cancer because there are very few treatments for it available. The brain-blood barrier is a massive hurdle because it prevents powerful cancer drugs such as chemotherapy from reaching cancerous tumors. The barrier is a membrane that keeps us safe by separating circulating blood from brain fluid and preventing bacteria and pathogens from reaching the brain. It’s made of high-density cells and is extremely selective about what it allows to pass through and most medications find it nearly impenetrable. But scientists at the Brain Tumor Research Centre at Portsmouth University and an English startup called Innovate Pharmaceuticals may have created a drug that can reach brain tumors using a compound so common most people have it in their medicine cabinets: aspirin.

Updated Brain Map Identifies Nearly 100 New Regions The first hints of the brain’s hidden geography emerged more than 150 years ago. In the 1860s, the physician Pierre Paul Broca was intrigued by two of his patients who were unable to speak. After they died, Broca examined their brains. On the outer layer, called the cortex, he found that both had suffered damage to the same patch of tissue. That region came to be known as Broca’s area.

What brain mapping hopes to accomplish We’ve mapped the human genome, tread on every last bit of earth, landed on the moon and plunged the oceans. There are few untrammeled frontiers left, aside from space and the human brain. It is a touch ironic that that which makes us who we are, which has been with us from the very beginning, is one of the biggest mysteries to humanity.

Been Traumatized? Here's How PTSD Rewires the Brain We tend to float about our lives, worrying about little inconveniences. But if the space inside your head is generally a peaceful one, count yourself lucky indeed. If instead, you are wrestling in the aftermath of some terrible trauma, it might seem like you’re the only one, but you are far from alone. According to the nonprofit PTSD United, Inc., 70% of U.S. adults have experienced a significant trauma at least once in their lifetime . That equates to 223.4 million people. 20% of those victims develop PTSD. When we picture the disorder, we often see a returned soldier, usually male, wrestling with emotional scars from the battlefield.

Scientists Unveil a New Map of the Brain With Unrivaled Resolution In Brief The Allen Institute for Brain Science has published and released a comprehensive, high-resolution map of the brain anyone can access online. They mapped 862 brain structures from a single donor brain. Even with our growing knowledge of the cosmos, we are relatively clueless about how our own brains function. That’s why making neurological maps is such an important exercise — it allows us to see the structural basis of how our brains work. Scientists Attempt to Reanimate the Brain Dead. What are the Implications? Imagine this, your loved one gets into a serious accident. You and your family gather at the hospital. In the I.C.U. the doctor makes a grim announcement, they‘re brain dead. It is highly unlikely they will ever come out of a vegetative state. Today, there is no way past such horror, save for a miracle. But if one biotech firm has its way, soon doctors would be able to regrow the person’s brain, using a new procedure and a host of technologies, which could theoretically restore them to who they were before.

Neuroscientists Discover an Ignition Switch for Consciousness What's the Latest? When Francis Crick, the English scientist who helped discover the structure of DNA, died in 2004, he and a colleague were in the midst of researching the potential existence of an on-off switch for consciousness located somewhere deep within the brain. Crick's hypothesis likened the proposed switch to an orchestra conductor "to bind all of our different external and internal perceptions together."