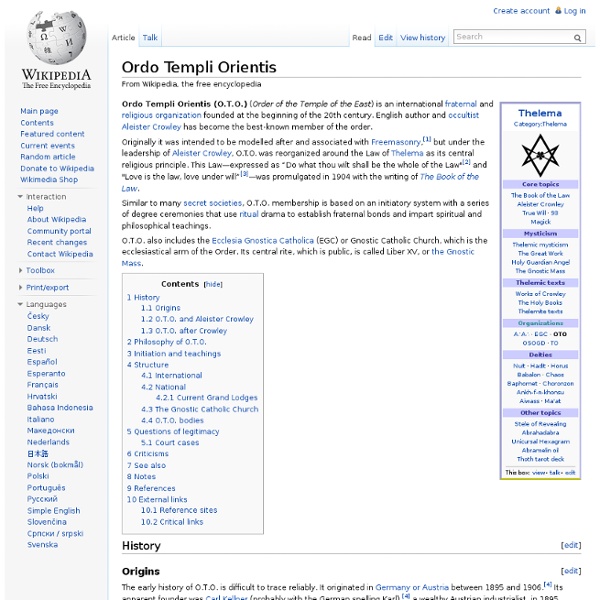 Ordo Templi Orientis (O.T.O.) ('Order of the Temple of the East' or 'Order of Oriental Templars') is an international fraternal and religious organization founded at the beginning of the 20th century. English author and occultist Aleister Crowley has become the best-known member of the order. Originally it was intended to be modelled after and associated with European Freemasonry,[1] such as Masonic Templar organizations, but under the leadership of Aleister Crowley, O.T.O. was reorganized around the Law of Thelema as its central religious principle. This Law—expressed as "Do what thou wilt shall be the whole of the Law"[2] and "Love is the law, love under will"[3]—was promulgated in 1904 with the writing of The Book of the Law. Similar to many secret societies, O.T.O. membership is based on an initiatory system with a series of degree ceremonies that use ritual drama to establish fraternal bonds and impart spiritual and philosophical teachings. History[edit] Origins[edit] Structure[edit]

Harpocrates In late Greek mythology as developed in Ptolemaic Alexandria, Harpocrates (Ancient Greek: Ἁρποκράτης) is the god of silence. Harpocrates was adapted by the Greeks from the Egyptian child god Horus. To the ancient Egyptians, Horus represented the newborn Sun, rising each day at dawn. When the Greeks conquered Egypt under Alexander the Great, they transformed the Egyptian Horus into their Hellenistic god known as Harpocrates, a rendering from Egyptian Har-pa-khered or Heru-pa-khered (meaning "Horus the Child"). Horus[edit] Among the Egyptians the full-grown Horus was considered the victorious god of the Sun who each day overcomes darkness. In the Alexandrian and Roman renewed vogue for mystery cults at the turn of the millennium — mystery cults had already existed for almost a millennium — the worship of Horus became widely extended, linked with Isis (his mother) and Serapis (Osiris, his father). Ovid described Isis: 20th century reference[edit] Modern occultist uses[edit] References[edit]

Holy Guardian Angel The term Holy Guardian Angel was possibly coined either by Abraham of Worms, a German Cabalist who wrote a book on ceremonial magick during the 15th century or Samuel Liddell MacGregor Mathers, the founder of the Hermetic Order of the Golden Dawn, who later translated this manuscript and elaborated on this earlier work, giving it extensive magical notes, but the original concept goes back to the Zoroastrian Arda Fravaš ('Holy Guardian Angels').[citation needed] In Mathers' publication of The Book of the Sacred Magic of Abramelin the Mage, he writes: "If thou shalt perfectly observe these rules, all the following Symbols and an infinitude of others will be granted unto thee by thy Holy Guardian Angel; thou thus living for the Honour and Glory of the True and only God, for thine own good, and that of thy neighbour. Later, author and occultist Aleister Crowley popularized the term within his religious and philosophical system of Thelema. Aleister Crowley's view[edit] Enochian view[edit]

Mephistopheles MEPHISTO_PHILES in the 1527 Praxis Magia Faustiana, attributed to Faust. Mephistopheles (/ˌmɛfɪˈstɒfɪˌliːz/, German pronunciation: [mefɪˈstɔfɛlɛs]; also Mephistophilus, Mephistophilis, Mephostopheles, Mephisto, Mephastophilis and variants) is a demon featured in German folklore. He originally appeared in literature as the demon in the Faust legend, and he has since appeared in other works as a stock character version of the Devil. In the Faust legend[edit] The name is associated with the Faust legend of a scholar — based on the historical Johann Georg Faust — who wagers his soul with the Devil. The name appears in the late 16th century Faust chapbooks. From the chapbook, the name enters Faustian literature and is also used by authors from Marlowe down to Goethe. Outside the Faust legend[edit] Shakespeare mentions "Mephistophilus" in the Merry Wives of Windsor (Act1, Sc1, line 128), and by the 17th century the name became independent of the Faust legend. References[edit] Bibliography[edit]

The Light of Egypt or the Science of the Soul and the Stars Thaumaturgy Religious views[edit] Christianity[edit] In original Greek writings, the term thaumaturge referred to several Christian saints. This is usually translated into English as "wonderworker", a saint through whom God works miracles, not just occasionally, but as a matter of course. It was even said that God raises up not more than one every century. Famous ancient Christian thaumaturges include Saint Gregory of Neocaesarea, also known as Saint Gregory Thaumaturgus, Saint Menas of Egypt, Saint Nicholas of Myra, Saint Seraphim of Sarov, Saint Anthony of Padua, Saint Ambrose of Optina, Saint Gerard Majella and Saint John of Kronstadt. Islam[edit] In Sunni, Shia, and Sufi Islam, a Tay al-Ard (literally "folding up of the earth") is a saint miraculously teleporting, or "moving by the earth being displaced under one's feet." Magic[edit] In the 16th century, the word thaumaturgy entered the English language meaning miraculous or magical powers. Hermetic Qabalah[edit] Philosophy[edit] See also[edit]

Ritual A priest elevates the Host during a Catholic Mass, one of the mostly widely performed rituals in the world. A ritual "is a sequence of activities involving gestures, words, and objects, performed in a sequestered place, and performed according to set sequence."[1] Rituals may be prescribed by the traditions of a community, including a religious community. Rituals are characterized by formalism, traditionalism, invariance, rule-governance, sacral symbolism and performance.[2] Rituals of various kinds are a feature of almost all known human societies, past or present. The field of ritual studies has seen a number of conflicting definitions of the term. In psychology, the term ritual is sometimes used in a technical sense for a repetitive behavior systematically used by a person to neutralize or prevent anxiety; it is a symptom of obsessive–compulsive disorder. Etymology[edit] The English word "ritual" derives from the Latin ritualis, "that which pertains to rite (ritus)". Formalism[edit]

Thelema The word thelema is the English transliteration of the Koine Greek noun θέλημα (pronounced [θélima]) "will", from the verb θέλω "to will, wish, purpose." As Crowley developed the religion, he wrote widely on the topic, producing what are collectively termed the Holy Books of Thelema. He also included ideas from occultism, Yoga and both Eastern and Western mysticism, especially the Qabalah.[8] Historical precedents[edit] The word θέλημα (thelema) is rare in classical Greek, where it "signifies the appetitive will: desire, sometimes even sexual",[9] but it is frequent in the Septuagint.[9] Early Christian writings occasionally use the word to refer to the human will,[10] and even the will of God's opponent, the Devil,[11] but it usually refers to the will of God.[12] One well-known example is in the "Lord's Prayer" (Matthew 6:10), “Your kingdom come. François Rabelais[edit] François Rabelais was a Franciscan and later a Benedictine monk of the 16th century. Aleister Crowley[edit]

Phoenixmasonry, Inc. Tantra in America About Tantra in America and the Tantrik Order (From "Spiritual Sex: Secrets of Tantra from the Ice Age to the New Millennium", published by the Pocket Books division of Simon & Schuster, copyright 1997, all rights reserved.) Dr. Bernard | The "Tantrik Order In America" | Controlling Forces | Charter Document | New Tantric Order | Underneath the Seal are thirty-three lines written in flowery English. At the bottom, under the heading "Supreme Instructors" and listed from first to fifth, are five names alongside which is written more encoded glyphs (presumably the magical signatures or names of these five personages), and the information that these are "Of the Tantrik Priesthood". At either side are two wax seals and the whole composition is held between two rising cobras (symbols of the Kundalini-energy of Tantric tradition) and intricate geometrical motifs. The thirty-three lines in English read as follows: "OM! That which has been covered has been revealed to him. New Tantric Order "OM!

Illuminati History The Owl of Minerva perched on a book was an emblem used by the Bavarian Illuminati in their "Minerval" degree. The Illuminati movement was founded on May 1, 1776 in Ingolstadt, Upper Bavaria as the Order of the Illuminati, and had an initial membership of five.[2] The founder was the Jesuit-taught Adam Weishaupt (d. 1830),[3] who was the first lay professor of canon law at the University of Ingolstadt.[1] The Order was made up of freethinkers as an offshoot of the Enlightenment and seems to have been modelled on the Freemasons.[4] Illuminati members took a vow of secrecy and pledged obedience to their superiors. Members were divided into three main classes, each with several degrees, and many Illuminati chapters drew membership from existing Masonic lodges. Fundamental changes occurred in the wake of the acceptance of Adolph Freiherr Knigge into the order. In 1777, Karl Theodor became ruler of Bavaria. Barruel and Robison Modern Illuminati Popular culture Modern conspiracy theory

Satanism The downward-pointing pentagram is often used to represent Satanism. Satanism is a broad term referring to a group of social movements comprising diverse ideological and philosophical beliefs. Their shared features include symbolic association with, or admiration for the character of Satan, and Prometheus, which are in their view, liberating figures. Eliphas Lévi's Sabbatic goat (known as The Goat of Mendes or Baphomet) has become one of the most common symbols of Satanism. Although the public practice of Satanism began with the founding of The Church of Satan in 1966, historical precedents exist: a group called the Ophite Cultus Satanas was founded in Ohio by Herbert Arthur Sloane in 1948.[3] Original Satanic practice, however, is intended to be independent. Satanist groups that appeared after the 1960s are widely diverse, but two major trends are theistic Satanism and atheistic Satanism. Theistic Satanism[edit] Luciferianism[edit] Palladists[edit] Our Lady of Endor Coven[edit] Islam[edit]