Based on a *True* True Story? 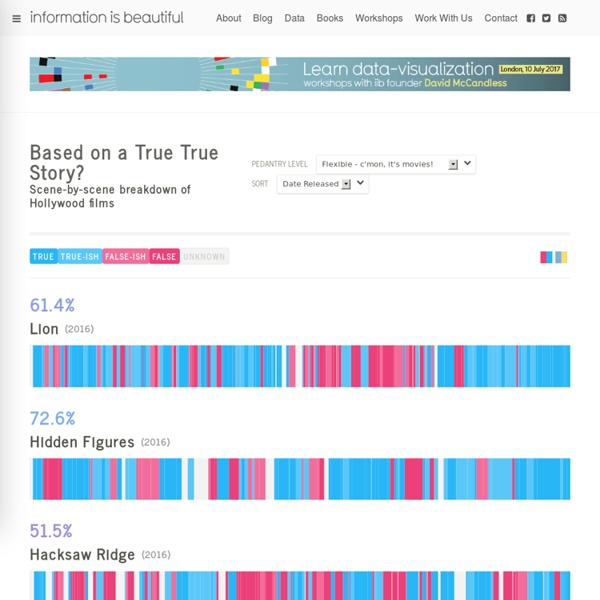 Explore your favourite “based on a true story” films scene-by-scene, beat-by-beat and test their veracity on a data level. Obviously watch out – **MEGA SPOILERS** Here’s how the truth levels break down. » UNKNOWN We couldn’t verify it or the sources were secret (i.e. personal diaries) » FALSE Out and out didn’t happen, or outrageous dramatic licence taken. » FALSE-ISH Pretty false but with reasonable / understandable dramatic licence. » TRUE-ISH Some tweaks but true in spirit. Or a mix of true and false. » TRUE Pretty much as it happened. Concept & Design: David McCandless // Research: Stephanie Smith // Code: Omid Kashan » See the data for even more detail. » Sign up to be notified when we add new movies. » Check out our beautiful books » Learn to be a dataviz ninja: Workshops are Beautiful

How to create stop-motion animation at home Stop-motion animation is a visual storytelling form that conjures up the illusion of movement by combining art, motion and metaphor to convey an idea. It’s also really fun to create, as 100+ first-time animators recently discovered during a workshop led by the TED-Ed Animation team. Ready to create your own stop-motion animation at home? Film Compositions Are Dissected to Show the Brilliance of Iconic Scenes The Shining Last year, Raymond Thi reignited our appreciation for film cinematography. Through his app, Composition Cam, he highlighted the brilliant arrangements of memorable scenes in iconic movies like The Shining, Ghostbusters, and Citizen Kane. Thi has recently expanded his idea by examining even more visually stunning film and TV compositions. Thi places bright pink lines to show how each scene is built. Through simple shapes like triangles and circles, as well as division of halves and thirds, he demonstrates that every frame of a film is truly a blank canvas.

Silent Film Effects Showcase the Brilliant Ingenuity of Early Movie Making Long before CGI and the green screen, silent filmmakers were incorporating astounding visual effects into their work. These ingenious techniques didn’t rely on digital tools, as there were none at the time. Instead, to surprise and delight viewers, silent film effects used elements like trick perspective, hidden pulleys, and filter adjustments to make the magic happen. Redditor Auir2blaze compiled some of these effects into a post on Imgur and then explained how exactly they were done. This includes behind-the-scenes shots of actor Harold Lloyd dangling from a clock over city streets, and how Mary Pickford could kiss herself on the cheek in Little Lord Fauntleroy. Artistes - Soul division David Dee Vision DJ // PRODUCTEUR As young as 14 years old, DAVID DEE-VISION gets into the DJ culture, and identifies in this hobby a good mean to express his passion for music. In 1998, he starts his carreer and for 2 years, he runs the turntables in clubs and afters of the Annecy area. His style and success takes him to Val d'Hiver as a resident DJ seasonner, where he will hold the scene for more than 10 years, crafting the sound that made the sucess of La Folie Douce and the Café Face. On summers, David goes to St Tropez, running the turntables as resident at l'Esquinade, Stephano Forever, Papagayo, and many more...

Lord Of The Rings at 15: the Fellowship interview each other, Feature To celebrate the 15th anniversary of The Lord Of The Rings: The Fellowship Of The Ring, we asked each of its nine heroes to pose nine questions to another. Prepare for nostalgia, philosophy and shocking vinegar-based revelations This is the Extended Edition of an article that first ran in the January 2017 issue of Empire. Loving Vincent Animated Film Features 62,450 Hand-Painted Frames The animated film Loving Vincent is one that’s nearly six years in the making. If that seems excessive, just wait until you find how it’s made. The movie, which examines the life of post-Impressionist artist Vincent van Gogh, uses hand-painted canvases to bring its action to life. It takes 12 oil paintings just to create one second of footage! Are you itching to see how it looks?

Romance and Science Fiction: A Match Made in the Heavens My favorite science fiction movies affect my brain, while my favorite romance movies, obviously, affect my heart. So it’s logical and sweet that for a well-rounded experience, my favorite mix of genres is romantic science fiction. Not to be confused with “scientific romance,” which was the old term for science fiction, romantic sci-fi is of course any type of sci-fi with a very prominent love story. Its umbrella includes all varieties of the genre, from time-travel stories to space operas to dystopian and/or post-apocalyptic futures. 12 Best and Worst Capes (Plus Cloaks! ) There’s a lot to look out for in Doctor Strange: the birth of a new hero, the immersive psychedelia, and a charming murderous sentient cape — or as Benedict Cumberbatch told us, “A cloak, you damn plebs!” (We may have embellished the quote there.) Whether you call it “cape,” “cloak,” or “blanket tied around your neck with an oversized safety pin,” if it drapes down your back, it was up for consideration in our gallery of the the 8 best and 4 worst capes from the mystical realm of movie and TV!

Did Logan Go Too Far With X-24? WARNING! This Post Contains SPOILERS! Logan (aka Wolverine 3) is now in theaters, and Marvel fans seem to be really embracing it.