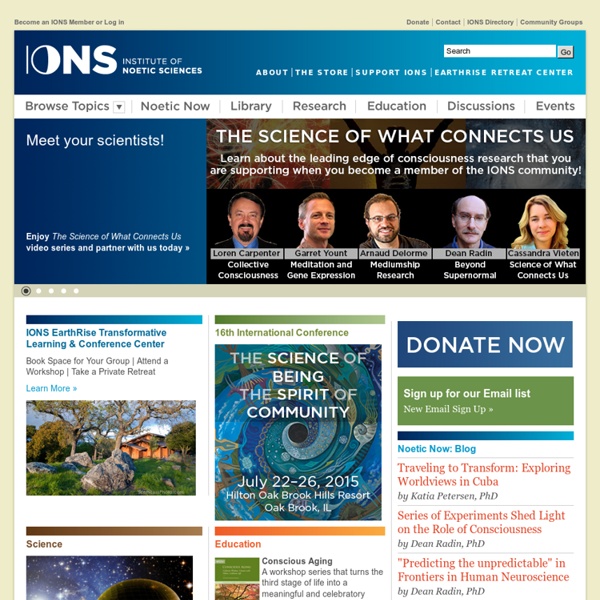 Beyond the Supercomputer: Social Groups as Learning Machines “Enthralling. Astonishing. Written with the panache of the Great Blondin turning somersaults on the rope above Niagara. Profound, extraordinarily eclectic, and crazy. The most exciting cliffhanger of a book I can remember reading.” James Burke, creator and host of seven BBC TV series, including Connections

Noetic theory In philosophy, noetics is a branch of metaphysical philosophy concerned with the study of mind and intellect. Noetic topics include the doctrine of the agent/patient intellect (Aristotle, Averroes)[1] and the doctrine of the Divine Intellect (Plotinus).[2] Contemporary use[edit] The gargantuan mountain of cash that separates the rich from everyone else Below (center pic) is a diagram representing the different annual income levels of all Americans in stacks of cash. At the very top are the super-rich (see the tiny box?). At the bottom are the poor and the 'middle-class' (see the little box in the lower corner?). Everything in-between is inhabited by various ranks of millionaire.

We Are Unlimited Potential: A Talk with Joseph Chilton Pearce Last week I sat down for a telephone conversation with Joseph Chilton Pearce, an author who has had a big influence not only on my work, but on the way I have raised my children. He alerted me early on to the damage that hospital birthing, day care, television, and modern schooling do to the developing brain. A World War Two veteran, he could be considered one of the elders of the human potential movement, although he brings to it a sobriety bordering at times on pessimism. His books include The Crack in the Cosmic Egg, Magical Child, and many more. His most recent is The Heart-mind Matrix: How the Heart can Teach the Mind New Ways to Think.

The Global Brain The Global Brain Video The video of the book has become even more well-known than the book itself. This groundbreaking presentation is now available on DVD. It can also be watched as a video stream on this site. Noos This article is about a philosophical term. For the philosophy journal, see Noûs. In philosophy, common English translations include "understanding" and "mind"; or sometimes "thought" or "reason" (in the sense of that which reasons, not the activity of reasoning).[2][3] It is also often described as something equivalent to perception except that it works within the mind ("the mind's eye").[4] It has been suggested that the basic meaning is something like "awareness".[5] In colloquial British English, nous also denotes "good sense", which is close to one everyday meaning it had in Ancient Greece. This diagram shows the medieval understanding of spheres of the cosmos, derived from Aristotle, and as per the standard explanation by Ptolemy.

Religious Experiences Shrink Part of the Brain The article, “Religious factors and hippocampal atrophy in late life,” by Amy Owen and colleagues at Duke University represents an important advance in our growing understanding of the relationship between the brain and religion. The study, published March 30 in PLoS One, showed greater atrophy in the hippocampus in individuals who identify with specific religious groups as well as those with no religious affiliation. It is a surprising result, given that many prior studies have shown religion to have potentially beneficial effects on brain function, anxiety, and depression.

Smile Into Your Organs: “A smile is an inexpensive way to improve your looks” Charles Gordy I love the idea that smiling is used as a healing and meditation practice by many ancient cultures. Taoists believe that holding a smile on your face and directing it inwards towards your organs and inner body, is the key to good health and longevity. Traditional Balinese healers know that a smile washes away bad energy and recommend smiling meditation as a simple way to calm the mind and bring health to the soul.