CLIL: What is CLIL? 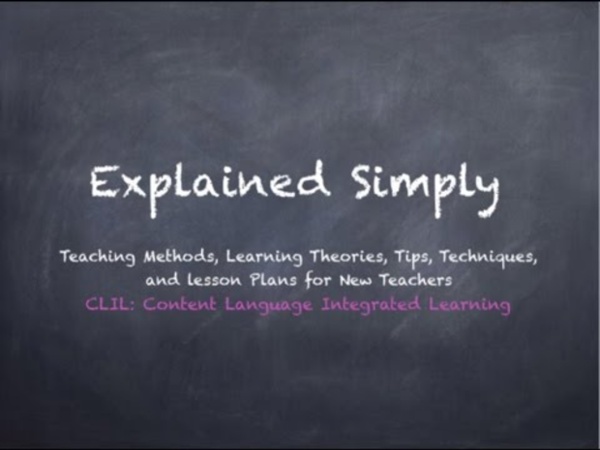 Language Value Language Value publishes articles, review and commentary essays aiming to the interdisciplinary analysis of English language use. This international peer-reviewed journal is dedicated to the publication of contemporary articles on theoretical and applied linguistics and their pedagogical implications. Language Value seeks to become a scholarly arena for the exploration of the attitudes and values conveyed by users of the English language in different contexts and situations. Scholars, teachers and researchers interested in this topic are welcome to submit their proposals. The journal also accepts commentary articles.

How to design a great CLIL activity A lot has been written about CLIL activities. The very good book “CLIL Activities” by Liz Dale and Rosie Tanner, but also “CLIL Skills” and “The TKT Course CLIL Module” are very interesting reads if you want to find inspiration for your own CLIL activity. However, I still hear teachers say they think CLIL is a lot of work. They say they don’t want to ‘change their entire lesson’. They ‘don’t have time‘. I think this is nonsense. What is CLIL? CLIL stands for Content and Language Integrated Learning and refers to teaching subjects such as science, history and geography to students through a foreign language. Learn more here. The term CLIL was coined by David Marsh, University of Jyväskylä, Finland (1994): "CLIL refers to situations where subjects, or parts of subjects, are taught through a foreign language with dual-focused aims, namely the learning of content and the simultaneous learning of a foreign language." However, CLIL teaching has been practised for many years, from the Babylonian era to the early sixties when bi-lingual education was introduced in many schools around the world. Even if you are unaware of the term CLIL, you may already have been using CLIL methodology for many years. There are many ways of describing the characteristics attributed to CLIL.

Five of the best CLIL resources online - CLIL Media In the posts on this website I usually share my opinion on CLIL as well as share some ideas of others. This time however, I would like to share CLIL resources that I think are really worth your time and can be used to advance both your knowledge of CLIL as well as help you with ideas for your lessons. 1.

CLIL – how to do it “Chris, we’ve been asked to work with some schools to develop their CLIL courses. Can you look after that?” That was the first time I heard the term CLIL. I said yes, not really knowing what I was letting myself in for, but now, many years down the line I hope some things I learnt can be of use to others having to design and teach CLIL courses. Much has been written on what CLIL is and why to do it, for example the articles on TeachingEnglish, but there is very little practical guidance on how to plan and teach CLIL lessons. If you are a subject teacher who has been asked to teach in English (or any other language for that matter), or a language teacher who has been asked to help teach content then this article will show you where to start.

Defining CLIL There was a lot of discussion about what exactly CLIL is, whether it is different from other approaches such as EMI (English as a Medium of Instruction) or CBI (Content-based Instruction) or CALLA (Cognitive Academic Language Learning Approach). One colleague sees CLIL as a special form of TEFL, with the main emphasis being on the language. Another colleagues is equally sure that 'CLIL is of course content-based instruction, which is an area loaded with confusing and overlapping terminology (CLIL, SIOP, ESP, EAP, Sheltered, task-based, immersion, etc.)'. Clilstore - Teaching units for content and language integrated learning Teaching unitsfor Content and Language Integrated Learning HelpAbout Select the language you are learning and your level to see the available units. Level AnyBasicA1A2B1B2C1C2Advanced

WHAT IS CLIL? - CLIL principles CLIL stands for Content and Language Integrated Learning. It is an approach concerning languages or intercultural knowledge and understanding (Marsh, 2002); it is a meaning-focused learning method (Van de Craen, 2006) and an “umbrella” term used to talk about bilingual education situations (Gajo, 2007). According to TKT CLIL handbook (The TKT Course, CLIL module, Kay Bentley, CUP 2010) CLIL is an evolving educational approach to teaching and learning where subjects are taught through the medium of a non-native language. To me, this last definition is the most descriptive one and the one the best approaches what most of us understand by CLIL. It is increasingly important in our global, technological society, where knowledge of another language helps learners to develop skills which will be able to communicate to people around the worlds.