Name Every Shade of the Rainbow With This 'Color Thesaurus' 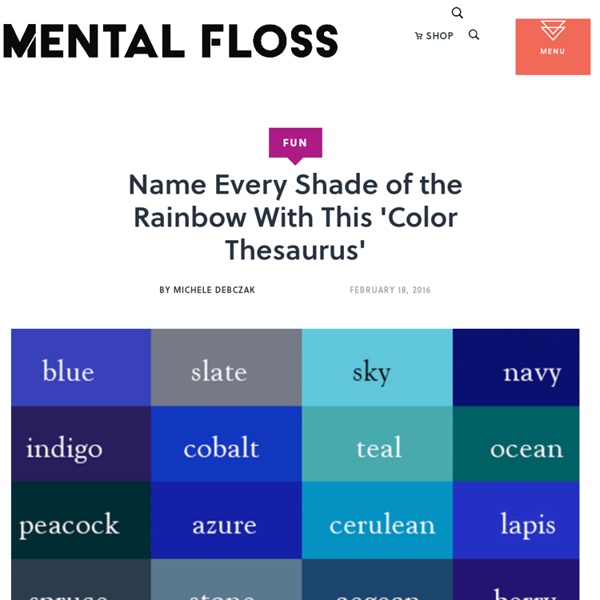 Driving along the highway in Didcot, England, you may notice something strange: the road signs point the way to places like Neverland and Middle-earth. The names of these and other fictional locales from literature were seamlessly added to road signs by an artist/prankster using Transport Medium, the official font of British road signs. After some sleuthing, BBC News found the man responsible, who spoke to the outlet on the condition of anonymity. He told the BBC that he's been orchestrating "creative interventions" all over England for about 20 years under different pseudonyms, and that this project was a reaction to Didcot being labeled "the most normal town in England" in 2017, which rubbed him the wrong way. "To me there's nowhere that's normal, there's no such thing, but I thought I'd have a go at changing people's perceptions of Didcot," he said of the town, which he describes as a "fun" and "funky" place. Jackie Billington, Didcot's mayor, recognizes that the signs have an upside.

Why Do Americans and Brits Have Different Accents? In 1776, whether you were declaring America independent from the crown or swearing your loyalty to King George III, your pronunciation would have been much the same. At that time, American and British accents hadn't yet diverged. What's surprising, though, is that Hollywood costume dramas get it all wrong: The Patriots and the Redcoats spoke with accents that were much closer to the contemporary American accent than to the Queen's English. It is the standard British accent that has drastically changed in the past two centuries, while the typical American accent has changed only subtly. Browse - TAMI Browse for Videos by Topic Not sure what you're looking for? Start out by exploring the categories below for footage from your hometown, to see what Texas looked like in the past, or check out some of your favorite Texas icons. Genre, or Film Type At TAMI, "genre" describes more than the categories of feature films that we all know and love, such as western, action, or comedy. Our collections contain a whole range of moving image production types, from advertisements to government films to home movies.

36 Beautiful Color Gradients For Your Next Design Project Looking for cool gradients for your graphic, web or UI design? Product designer and front end developer Indrashish Ghosh has created a useful online tool called uiGradients – a free collection of over 260 linear gradients that you can use for design and code. You can browse gradients by color, copy their hexadecimal or CSS codes, and even download a .JPG version of each one. Everyone Speaks Text Message Illustration by The Heads of State Illustration by The Heads of State How do you spell “N'Ko” in N'Ko? Film History Before 1920 The Lumiere Brothers and the Cinematographe: The innovative Lumiere brothers in France, Louis and Auguste (often called "the founding fathers of modern film"), who worked in a Lyons factory that manufactured photographic equipment and supplies, were inspired by Edison's work. They created their own combo movie camera and projector - a more portable, hand-held and lightweight device that could be cranked by hand and could project movie images to several spectators. It was dubbed the Cinematographe and patented in February, 1895.

Color Name & Hue It is always a problem for me to assign a certain color to a main hue. If you struggle also with this because of your color blindness, Color Name & Hue might help you. Try it out. With this little tool you can either enter RGB (Red-Green-Blue) values, HSB (Hue-Saturation-Brightness) numbers or a hexadecimal code for a color, to find its closest match of a named color and its corresponding hue. It is also possible to just use the sliders to see how color hues are changing. Why is English so weirdly different from other langu... English speakers know that their language is odd. So do people saddled with learning it non-natively. The oddity that we all perceive most readily is its spelling, which is indeed a nightmare. In countries where English isn’t spoken, there is no such thing as a ‘spelling bee’ competition. For a normal language, spelling at least pretends a basic correspondence to the way people pronounce the words. But English is not normal.

The Best Websites On The Internet The internet is a big place, with a lot of content. Over one billion websites at the time of writing. With the web constantly changing, it’s hard to keep track of which sites have the best content and resources. To help make things easier, we’ve compiled this enormous list of the best websites on the internet, split into their relevant categories. The websites on this list are those that we consider to be the best: genuinely useful, top-of-the-line sites (not apps) where you’ll find what you need.

All Themes View All ThemesMost PopularMost UsedRandom Theme 12 0 0 0 landscape 0 0 0 Hip hop vocabulary compared between artists Matt Daniels compared rappers’ vocabularies to find out who knows the most words. Literary elites love to rep Shakespeare’s vocabulary: across his entire corpus, he uses 28,829 words, suggesting he knew over 100,000 words and arguably had the largest vocabulary, ever.I decided to compare this data point against the most famous artists in hip hop. I used each artist’s first 35,000 lyrics. That way, prolific artists, such as Jay-Z, could be compared to newer artists, such as Drake. As two points of reference, Daniels also counted the number of unique words in the first 5,000 used words from seven of Shakespeare’s works and the number of uniques from the first 35,000 words of Herman Melville’s Moby-Dick. I’m not sure how much stock I would put into these literary comparisons though, because this is purely a keyword count.

30 Interesting Websites You Probably Haven’t Heard Of Apart from the regular dips into your favorite social media waterholes, I’m sure you have that assortment of websites you visit almost religiously every day. Routines have that nasty habit of becoming boring after a while, hence the need for lists like this. In this post you will find 30 interesting websites that you probably have never heard of. Although not all will be appealing to everyone, I’m sure you will be able to find a handful of websites, from this list, that is your cup of tea. From places to discover new content such as articles and music, to sites where you can learn about Greek mythology and unpublished truths about trending issues, hopefully this list will help you break the monotony – at least until the next list comes along. Read more: 20 Interesting Reddit Communities to Get Lost In

The Only Color Combinations Cheat Sheet You'll Ever Need Our lives are filled with color. Color influences our moods, feelings, and perceptions, as well as our decision-making processes. That means your choices in color combinations play an essential role in building your brand and website. Choosing the best color combination is both a science and an art.