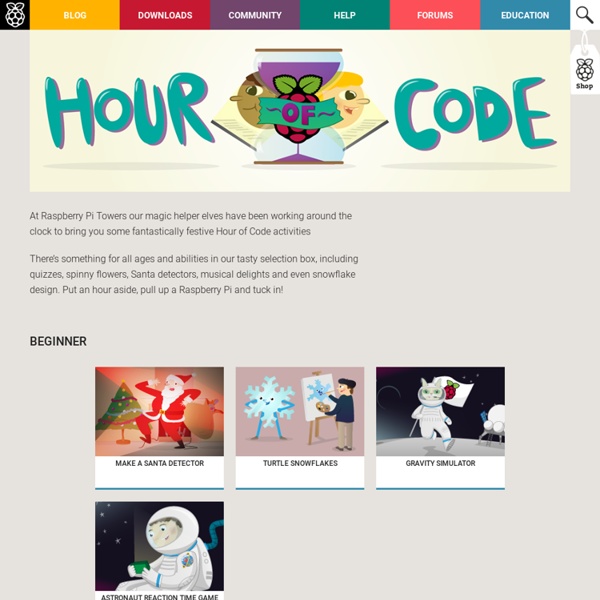 How to Upgrade to a Raspberry Pi 3 You’ve just received a brand new Raspberry Pi 3 – the latest, most powerful version of the popular mini-computer that has taken the “maker” world by storm. If this is your first Pi, then you’ll need to get a copy of the Raspbian OS installed. But if this is just the latest in a long line of Pis, you might prefer to upgrade your existing install, which is almost as simple as transferring the microSD card from your older Pi into the new model and booting. Almost as simple, but not quite.

Makey Makey Interactive Room Challenge Lesson Plan By Teacher Librarian Colleen Graves Appropriate for grade levels ES-HS Lesson Objectives Introduce or Reiterate the TMI Design process from Invent to Learn - Think Make Improve Design and create an interactive space in the classroom or library Engage students in innovation and creation Entice students to create with technology rather than just consume it Teach key mapping software Soundplant or coding keys with Scratch Lesson Materials Makey Makey for each student or partner groups Alligator Clips Tinfoil Copper Tape Playdoh Anything conductive the students want to use for their interactive idea Key mapping software Soundplant (Use Vocaroo or Audacity to record sounds) or have students create sounds and map keys with Scratch (but students will need accounts and might be tempted to play games.)

Raspberry Pi Scratch Robot I found an application for the Raspberry in my classroom! With the endless possibilities of the Raspberry Pi in education, it is difficult to focus on one application. This is my attempt to document a focused application. I am sure this idea will branch out into other ideas or supplemental ideas will follow. Goal: The students are presented with an easy to develop hardware system on top of the robot chassis consisting of the Raspberry Pi, Pi Cobbler, Battery pack, H-bridge motor controller, and a Breadboard.

Newberry Elementary School These videogames were written by Newberry Elementary School Students as part of the Hour of Code 2015. Click on the links below to play the games on your comuter or smartphone. Mr. Starting with the Raspberry Pi (part 1) Introduction I always wanted to be able to control my electronics and multimedia with a simple and flexible system that could be easily installed and configured. After working with both PICs and Arduino, I have found the ultimate solution: the Raspberry Pi. Along with PICs and Arduino, Raspberry Pi has in common the low cost and the possibility to be configured as you like, but it is what distinguishes it to fascinate: the Raspberry Pi is a real computer, supporting a real operating system, with all the features to make it extremely easy and fun to work with complex electronic projects. The real strength of this boards is that we can easily interface electronics with high-level applications, such as a web server.

Using Hour of Code in your classroom This year Khan Academy is doing even more to create meaningful hours of codes for all learners (and, as always with KA, for free)! On Khan Academy, we offer a multi-hour, self-paced curriculum in JavaScript and lessons in HTML / CSS as well as SQL (language for databases) for students to learn various forms of programming. For Hour of Code, we've created special introductory curricula to get your students started!

Google and Raspberry Pi join forces to create Coder Over the last few years, interest in coding (especially for the web) has led to a blossoming of resources that help average people learn how to program from scratch. Google has decided to join the fun with a new tool called Coder — along with the help of the low-cost Raspberry Pi PC. With Coder, users can develop their own apps for the web and then host them on a miniature server located directly on the Raspberry Pi. The overall cost for the DIY programming project, using Google’s recommended materials, is under $50 — and all of the educational materials are free. After procuring a Raspberry Pi, eager students simply download information onto an SD card, plug it into the tiny computer, connect to a shared Wi-Fi and access Coder through Chrome.

Kids, Parents, and Video Games Odds are your kids play video games. And as their parent, you have ideas about what’s right for them when they do. Fortunately, tools like game ratings and parental controls can help you learn about the games your kids want to play — and help you make sure they’re playing according to your rules. That includes knowing how to make sure your kids can’t access online features if you don’t want them to. Regardless of the limits you set or the tools you use, talk to your kids about them.