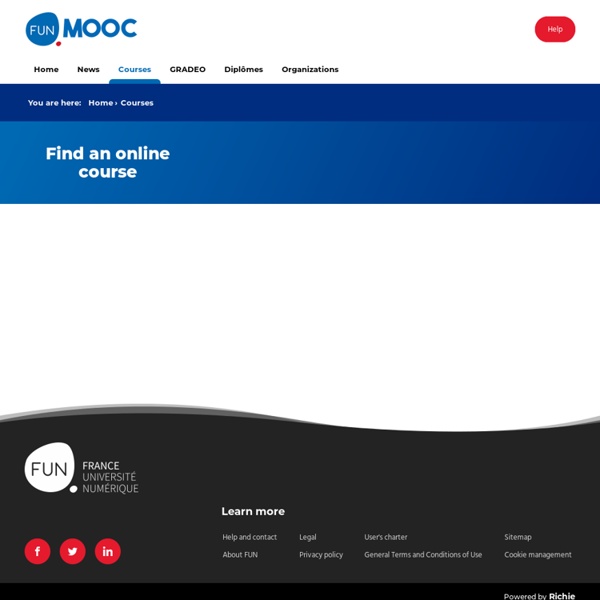 Creating Interactive Digital Children's Books With Author/Illustrator Roxie Munro by Beth Bacon Roxie Munro has written and illustrated more than 35 books for children and has created several interactive digital books including “Roxie’s a-MAZE-ing Vacation Adventure” and “Roxie’s Doors“. A new app, “Slithery Snakes” will be out this summer. Beth Bacon spoke with Roxie about how she moved from creating traditional books to making interactive books for children and what she sees for the future. Beth Bacon: You’re embracing new digital storytelling technologies. Why?

MOOC - changement climatique Everything you need to know about climate change in a nutshell UN-Secretary-General Ban Ki-moon has called climate change the “defining challenge of our time” and in many countries the impacts of it are already felt. At the same time, it is still very difficult for many people not working directly on the subject to understand the basics of climate change. For example, which gases are actually contributing to the greenhouse gas effect? What temperature change is projected for this century? How does the international climate change negotiation process work?

Nouvel onglet Did you ever wanted to be a great artist? But unfortunately you are really bad at it? Well that's ok because now with Psykopaint you can be a great artist with no skills. Animate your drawings with style - Tutorials - Page 1 It’s easy to be distracted by flashy digital effects, but sometimes keeping it simple can be just as effective. Keeping in mind how people used to do compositing before computers arrived on the scene, it is possible to use After Effects and Photoshop to create contemporary animation in a traditional way. Here, animator Vida Vega shows you how she uses blending modes and digital painting to composite and tint a piece of hand-drawn animation in a subtle way that lets the original artwork take centre stage. She also reveals some great ways to speed up your workflow and alleviate much of the monotony of creating mattes of individual frames. On page six of this tutorial, we've provided the finished animation.

Alternative Open Source - osalt.com Microsoft Office Sharepoint server (MOSS) runs on top of Windows Sharepoint Services (WSS), adding core features and and user web parts. Essentially, it's a workflow engine and business intelligence tool and a very good one at that. MOSS' main advantage and strength is in organizing users' information in a central web-based application and classifying data. In the past, users have had difficulty with the sheer volume of unstructured documents, email, messages and more that are generated by their organizations. 10 Tips for Creating Higher Selling Themes Ever wondered what it would be like to sell your own web design templates or WordPress themes? Today we're going to take a look at the "product side" of the web design industry using ThemeForest, our own theme marketplace at Envato, as an example. These tips are specifically for web designers who are trying to sell their designs as products, but these are also ideas that apply to pretty much anyone trying to promote their portfolios or get more exposure! Introduction ThemeForest has a reputation for high quality themes and templates, and this is not just by chance.

Interactive Multimedia Production from Canvas.net with Andrew Walker, Ph.D. This course familiarizes students with creating instructionally focused interactive media. The tool used in the class currently is Adobe Flash. Topics to be covered include fundamental programming concepts (variables, variable types, code re-use, commenting code, and basic control structures) in addition to the fundamentals of the flash environment (animation or “tweening”, vector graphics, use of sound and video).

Comment concevoir une interface de menu pour le jeu d'un enfant en bas âge ou App - Tutoriel Développement Tuts + Jeu The mobile market has begun to target the younger generations in a big way. Entire sections of app markets are dedicated towards applications and games aimed at the pre-school demographic. Developers have taken note, and the market has become increasingly crowded. When you create an app targeted at the youngest generation, you need to be aware of two key things: The attention span of your audienceThe complexity of your GUI (Graphical User Interface)