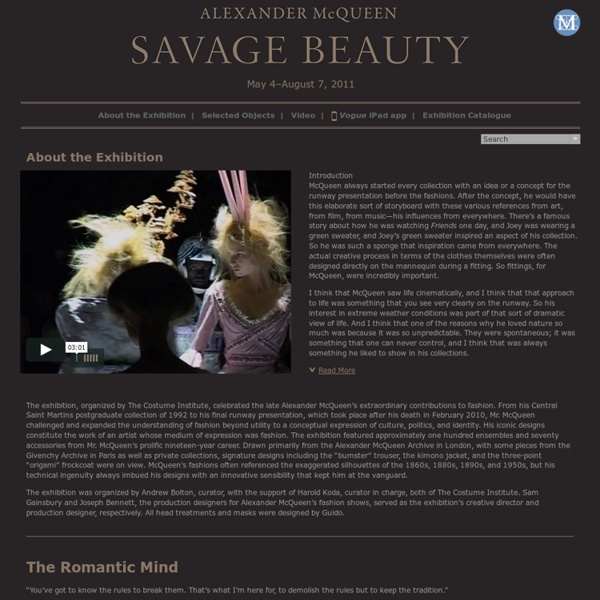 The exhibition, organized by The Costume Institute, celebrated the late Alexander McQueen’s extraordinary contributions to fashion. From his Central Saint Martins postgraduate collection of 1992 to his final runway presentation, which took place after his death in February 2010, Mr. McQueen challenged and expanded the understanding of fashion beyond utility to a conceptual expression of culture, politics, and identity. His iconic designs constitute the work of an artist whose medium of expression was fashion. The exhibition featured approximately one hundred ensembles and seventy accessories from Mr. McQueen’s prolific nineteen-year career. The exhibition was organized by Andrew Bolton, curator, with the support of Harold Koda, curator in charge, both of The Costume Institute. The Romantic Mind “You’ve got to know the rules to break them. —Alexander McQueen McQueen doggedly promoted freedom of thought and expression and championed the authority of the imagination. Romantic Nationalism

Rusty Innards No sir, Chrysocyon brachyurus, the Maned Wolf, isn’t any of those..It’s a creature unto itself, the only member of it’s Genus. The maned wolf (pardon the confusing misnomer..as I said before, it’s technically not a wolf) is South America’s largest canid, and one of my favorite canids, due in part to it’s very un-canid-like behaviors. It’s a solitary hunter; it doesn’t form packs, and lives a loner lifestyle, wandering the savannas of South America on it’s stilt-like legs in search of food and, in the off chance it comes across another Maned Wolf, a mate. I’m always drawn to bizarre animals, and these fellows are made all the more bizarre by the fact they are ancient…Maned Wolf fossils have been found that date back to the Pleistocene, which means these guys used to share their habitat with the bear-sized Smilodon populator, the largest saber-toothed cat (and one of the heaviest cats ever, for that matter) ever discovered.

Happy New Year" - StumbleUpon Happy New Year / 30 December, 2009 [click for previous image: let it snow #3] Happy New Year / 30 December, 2009 [click for next image: ringing in the new year] Title • Happy New Year I've spent the last couple of days wondering what to post to close out the year and then came across this entry on momentaryawe.com (run by my good friend Catalin Marin): his twelve favourite shots from 2009, one from each month. So, with credit to Catalin for the idea, here are my twelve favourites for the preceding year. As always, let me know what you think. On a different matter: don't forget that there are just a few days left in which to snap up a 15% discount on our Photoshop tutorials. And finally: Happy New Year for 2010 :)

Son of Stern Presents… The Last Masterpieces of Alexander McQueen - The Cutting Class Alexander McQueen, AW10, Paris. For many who knew or worked with Alexander McQueen, or for those many people who admired the work of Alexander McQueen, the pieces from his final collection must carry with them an incredible sense of sadness and devastation. Not only because they were the final pieces that he was working on up until his death, but also because they are so exquisite. In many ways the solemn presentation of these pieces, away from the theatre of the catwalk, gave everyone a chance to see just how carefully crafted they were, how the silhouettes were moulded and supported to perfection, how the emotive prints were shaped almost invisibly by darts and panels to sculpt the prints to the bodies of the models. Everything about this collection showed discipline and restraint and an unabashed respect for pure craftsmanship, and that in itself speak volumes about McQueens work. Images from Vogue.co.uk» Further Reading:

Bridges that GROW themselves out of tropical roots and vines crossing rivers By Daily Mail Reporter Updated: 15:35 GMT, 10 September 2011 Deep in the rainforests of the Indian state of Meghalaya, bridges are not built, they’re grown. Ancient vines and roots of trees stretch horizontally across rivers and streams, creating a solid latticework structure strong enough to be used as a bridge. Ancient solution: The 'double decker' living tree root bridge in the village of Nongriat in Meghalaya, India. Locals have been using the bridges for over 500 years Some of the bridges are over a hundred feet long and can support the weight of fifty or more people. The Cherrapunji region is one of the wettest places in the world with many fast-flowing rivers and streams, making these bridges invaluable to those who live in the region. Nature's incredible engineering: Some of the bridges can hold more than 50 people at a time. Interwoven: A close up of the solid lattice work that makes the bridges so strong. In time, a sturdy living bridge is produced.