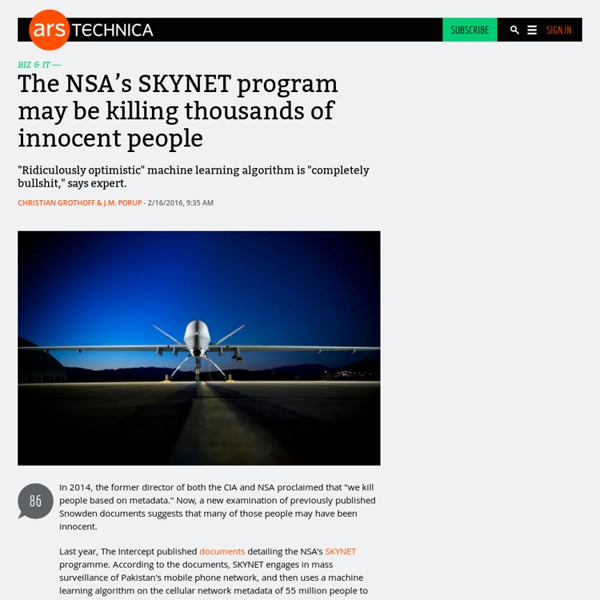 In 2014, the former director of both the CIA and NSA proclaimed that "we kill people based on metadata." Now, a new examination of previously published Snowden documents suggests that many of those people may have been innocent. Last year, The Intercept published documents detailing the NSA's SKYNET programme. According to the documents, SKYNET engages in mass surveillance of Pakistan's mobile phone network, and then uses a machine learning algorithm on the cellular network metadata of 55 million people to try and rate each person's likelihood of being a terrorist. Patrick Ball—a data scientist and the director of research at the Human Rights Data Analysis Group—who has previously given expert testimony before war crimes tribunals, described the NSA's methods as "ridiculously optimistic" and "completely bullshit." A flaw in how the NSA trains SKYNET's machine learning algorithm to analyse cellular metadata, Ball told Ars, makes the results scientifically unsound.

Badass Attorney Shoots Down the Case for Drones Last Sunday, General Michael V. Hayden, former director of the NSA and the CIA, wrote an Op-Ed in the New York Times called "To Keep America Safe, Embrace Drone Warfare." After an opening scene of a drone operator double-checking for nearby civilians before taking out two enemy targets, General Hayden makes the case that America's program of remote targeted killings, while not perfect, is achieving results. It has disrupted terrorist plots and weakened Al Qaida, he wrote. Furthermore, according to intelligence that Hayden himself claims to have seen, public concerns of massive civilian casualties are overblown.

The vast gulf between current technology and theoretical singularity An interesting pair of news posts caught my eye this week, and they’re worth presenting for general discussion. First, VentureBeat has an interview with futurologist Ray Kurzweil, who made waves in 2005 with his book The Singularity Is Near. In it, Kurzweil posits that we’re approaching a point at which human intelligence will begin to evolve in ways we cannot predict. The assumption is that our superintelligent computers (or brains) will allow us to effectively reinvent what being human means.

Yemeni victims of U.S. military drone strike get more than $1 million in compensation The Yemeni government paid the families of those killed or injured in a U.S. drone strike last year more than $1 million, according to documents that provide new details on secret condolence payments seen as evidence that civilians with no ties to al-Qaeda were among the casualties. The documents, which are signed by Yemeni court officials and victims’ relatives, record payouts designed to quell anger over a U.S. strike that hit vehicles in a wedding party and prompted a suspension of the U.S. military’s authority to carry out drone attacks on a dangerous al-Qaeda affiliate. The records reveal payments that are many times larger than Yemeni officials acknowledged after the strike. The $1 million-plus figure also exceeds the total amount distributed by the U.S. military for errant strikes in Afghanistan over an entire year. [Documents: Final compensation to Yemeni families of those killed or injured in drone attack] Ali Abdallah Mohammad al-Taisi was killed in a drone strike.

How We Read a NYTimes Story on Drone Strikes in Yemen In this post, we’re trying something new. Below, we present an almost line-by-line annotation of yesterday’s New York Times story on US and Yemeni military operations in Yemen. Among other things, the following is intended to identify legal implications of the news being reported, the significance of some of the revelations, and paths for further investigative reporting. U.S.

How to Translate a News Story About A Drone Strike Over the past three days, more than 50 suspected members of al Qaeda in the Arabian Peninsula have been killed in a spate of mysterious attacks in Yemen. But what really happened? That very much depends on the news story you read. The Guardian attributed the attacks to "several air strikes -- presumed to be carried out chiefly by U.S. drones." Google chairman Eric Schmidt says robots can tackle overpopulation and climate change Artificial intelligence will let scientists solve some of the world's 'hard problems.' This is according to Google chairman, Eric Schmidt, who claims that super-intelligent robots will someday help use solve problems such as population growth and climate change. During a talk in New York, he said improvements in AI will help scientists better understand the cause and effect of these challenges to come up with sensible solutions. 'AI will play this role to navigate through this and help us,' he said, adding that he would like to see personalised AI systems help people in every day life. Artificial intelligence will let scientists solve some of the world's 'hard problems.'

CIA's Pakistan drone strikes carried out by regular US air force personnel Link to video: Drone: exclusive clip from new documentary A regular US air force unit based in the Nevada desert is responsible for flying the CIA's drone strike programme in Pakistan, according to a new documentary to be released on Tuesday. The film – which has been three years in the making – identifies the unit conducting CIA strikes in Pakistan's tribal areas as the 17th Reconnaissance Squadron, which operates from a secure compound in a corner of Creech air force base, 45 miles from Las Vegas in the Mojave desert. Several former drone operators have claimed that the unit's conventional air force personnel – rather than civilian contractors – have been flying the CIA's heavily armed Predator missions in Pakistan, a 10-year campaign which according to some estimates has killed more than 2,400 people.

Google Chairman Thinks AI Can Help Solve World's ‘Hard Problems’ Google’s chairman thinks artificial intelligence will let scientists solve some of the world’s "hard problems," like population growth, climate change, human development, and education. Rapid development in the field of AI means the technology can help scientists understand the links between cause and effect by sifting through vast quantities of information, said Eric Schmidt, executive chairman of Alphabet Inc., the holding company that owns Google. “AI will play this role to navigate through this and help us.” It can also aid companies in designing new, personalized systems. In the future, Schmidt would like to see “Eric and Not-Eric,” he said at a conference in New York, where “Eric” is the flesh-and-blood Schmidt and“not-Eric is this digital thing that helps me.” Hot Field

More than 2,400 dead as Obama’s drone campaign marks five years Obama has launched over 390 covert drone strikes in his first five years in office (Pete Souza/White House). Five years ago, on January 23 2009, a CIA drone flattened a house in Pakistan’s tribal regions. It was the third day of Barack Obama’s presidency, and this was the new commander-in-chief’s first covert drone strike. Initial reports said up to ten militants were killed, including foreign fighters and possibly a ‘high-value target’ – a successful first hit for the fledgling administration. But reports of civilian casualties began to emerge. As later reports revealed, the strike was far from a success.

Artificial intelligence and nanotechnology 'threaten civilisation' Artificial intelligence and nanotechnology have been named alongside nuclear war, ecological catastrophe and super-volcano eruptions as “risks that threaten human civilisation” in a report by the Global Challenges Foundation. In the case of AI, the report suggests that future machines and software with “human-level intelligence” could create new, dangerous challenges for humanity – although they could also help to combat many of the other risks cited in the report. “Such extreme intelligences could not easily be controlled (either by the groups creating them, or by some international regulatory regime), and would probably act to boost their own intelligence and acquire maximal resources for almost all initial AI motivations,” suggest authors Dennis Pamlin and Stuart Armstrong. “And if these motivations do not detail the survival and value of humanity, the intelligence will be driven to construct a world without humans.

President Obama's new normal: the drone strikes continue There has been yet another violent attack with mass casualties. This was not the act of a lone gunman, or of an armed student rampaging through a school. It was a group of families en route to a wedding that was killed. The town was called Radda – not in Colorado, not in Connecticut, but in Yemen. How a computer sees history after "reading" 35 million news stories So far, humans have relied on the written word to record what we know as history. When artificial intelligence researchers ran billions of those words from decades of news coverage through an automated analysis, however, even more patterns and insights were revealed. A team from the University of Bristol ran 35 million articles from 100 local British newspapers spanning 150 years through both a simple content analysis and more sophisticated machine learning processes. By having machines "read" the nearly 30 billion words, the simple analysis allowed researchers to easily and accurately identify big events like wars and epidemics. Perhaps most interesting, the techniques also allowed the researchers to see the rise and fall of different trends during the study range from the years 1800 - 1950.