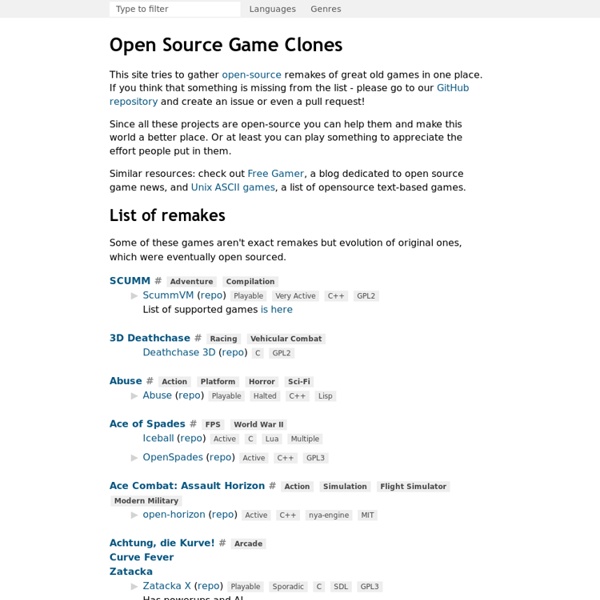 Normal Stuff - I, Cringely » Blog Archive » Which domain registrar is best? Which domain registrar is best? I have domains from Network Solutions, GoDaddy, and Register.com, but there are many other registrars — some of which must be better than these. Network Solutions is too expensive and difficult to work with, GoDaddy is annoying and greedy, while Register.com may be great but I don’t have a good comparison. I am thinking of consolidating all my domains with one registrar. Where should I go and why? Commodore - 64 Emulators - Zophar's Domain Commodore - 64 Emulators << Go to Windows systems list Commodore - 64 Emulators on Other Platforms Linux (5)BeOS (3)Macintosh (5)Amiga (2)Consoles -- Dreamcast (2) -- Playstation 2 (3) -- Nintendo DS (1) -- Game Park 32 (3) -- Playstation Portable (1) -- Nintendo Wii (1)Java (5)Palm OS (1)Pocket PC (2)iOS (iPhone/iPod Touch) (1)Android (2)

The 50 best free PC games | Best PC Games, Features, Free Games There might be no such thing as a free lunch, but there is certainly such a thing as free lunchtime entertainment. Over the following pages you’ll find a list of the best free indie games on PC – from 20-minute diversions to weekend-consuming, endlessly-expanded strategy epics. All of the games on this list are free in their entirety. That means no microtransaction-supported free-toplay games and no shareware. We’ve also excluded ‘pay what you want’ games on the basis that developers who give you the ability to chip-in would probably like you to consider doing that. Once we’d assembled our longlist we all voted for the games we liked the most and tallied up the scores to produce the top 50. 50. Developer: NASALink:www.bit.ly/mbaseg Tom: Staying alive on the moon is a logistical nightmare, as Moonbase Alpha’s publishers, NASA, know only too well. 49. Developer: RobotAcidLink:www.bit.ly/14NfIAz 48. Developer: Enormous ElkLink:www.unrealworld.fi 47. Developer: DukopeLink:www.dukope.com 46.

Interactive 3D model of Solar System Planets and Night Sky Bigpoint THE LONG DARK, a first-person post-disaster survival sim by Hinterland PayPal pledges are now possible at www.intothelongdark.com All money raised there will be applied to the Stretch Goals. We will update the running total at regular intervals. The Long Dark is a thoughtful, exploration focused survival simulation set in the Northern wilderness in the aftermath of a global disaster. If you're a fan of atmospheric, exploration-focused games like Fallout 3 or STALKER, you'll love The Long Dark. We talk about it in more detail in the "Risks and Challenges" section below, but our philosophy around Stretch Goals is not to use extra funding to introduce risky scope or feature creep that will delay the game, but rather, to find ways to add more quality to the experience and enrich the game with interesting new content that enhances your connection to the world we're creating for you. LATEST UPDATE: #28 (Oct 15): The Final Push, New Stretch Goals! For all other updates, click here. And that's only the beginning. As Mackenzie, you will: Early praise for The Long Dark...

The Loom The Science Tattoo Emporium continues to thrive, long after I first wondered aloud in August 2007 whether scientists had any cool tattoos of their research hidden under their lab coats. I continue to get photos at a regular rate, and as I post new ones, they continue to get noticed anew by places like Digg and Boing Boing. Initially, I was so stunned by the influx of photos that I posted just about anything that came my way. But as the emporium has grown, I’ve become choosier about which ones I post. So if you are considering sending in your own scientific ink, please read these guidelines: 1. 2. 3. 4.

Download Amiga Roms - Index 'S' Sensible Golf was a 2D golf game released by Sensible Software in 1994 for the Amiga. The game featured the same pin like characters that had previously been used with great success in Sensible Soccer and Cannon Fodder although upon release it wa.. Sensible World of Soccer (SWOS) was a sequel to the original Sensible Soccer game. It brought a whole new meaning to the miniature football game by introducing the football manager aspect. Gamers could buy and sell players to build the ultimate team. A platform adventure game which was both ground breaking but also pretty darn hard! Commodore 64 version of SEUCK Shoot'Em Up Construction Kit a.k.a. This article is about the video game Silk Worm. This article is about the first installment in the series of computer and video games. Speedball is a video game series comprising of three games developed by the Bitmap Brothers and also Dov Huff. Sorry, we do not have any specific information on this Amiga ROM.

Gabe Newell: "Linux and open source are the future of gaming" “It feels a little bit funny coming here and telling you that Linux and open source are the future of gaming” are the words that Valve Co-Founder and Executive Director Gabe Newell opened with during a panel at this year’s LinuxCon held in New Orleans. Fortunately, Mr. Newell took the time to elaborate on what he meant by that statement, and how he thinks we’ll get there. The short answer: You. During his 20-or-so minute talk, Newell analyzed how the roles of users are shifting ever closer to that of a developer. “We’re going to see a significant sort of democratization in the content creation process,” Newell said. “The one entity we wouldn’t ever want to compete with is our own users. Newell accused companies like Microsoft and Apple’s proprietary systems of stifling innovation through sluggish certification processes, among other things.

Sneaky VFX » Archive » Perverts September 7th, 2011 My niece had another birthday! I tried to share some more knowledge with her. Some have encouraged me to look for ways to get these published, which I will do as soon as I think of something to call them. This comic and more will be ready for sharing, as printed comics and videos, on December 1! Stop by MeddlingAuntie.com for updates! ScummVM __ Compatibility - SVN This page lists the progress of ScummVM as it relates to individual game compatibility. Please note this list applies to the English versions of games. We attempt to test many versions of games, however there are occasionally problems with other languages. Click on the game name to view the complete notes of a game. This is the compatibility of the current development version, not of a stable release (Please see one of the following for the Compatibility charts of the stable releases: 1.6.0 1.5.0 1.4.1 1.4.0 1.3.1 1.3.0 1.2.1 1.2.0 1.1.0 1.0.0 1.0.0rc1 0.13.1 0.13.0 0.12.0 0.11.1 0.11.0 0.10.0 0.9.1) As this is the status of the development version, occasional temporary bugs may be introduced with new changes, thus this list refects the 'best case' scenario.