Harvard Studied People For 75 Years & Found That Happiness Comes From One Thing... 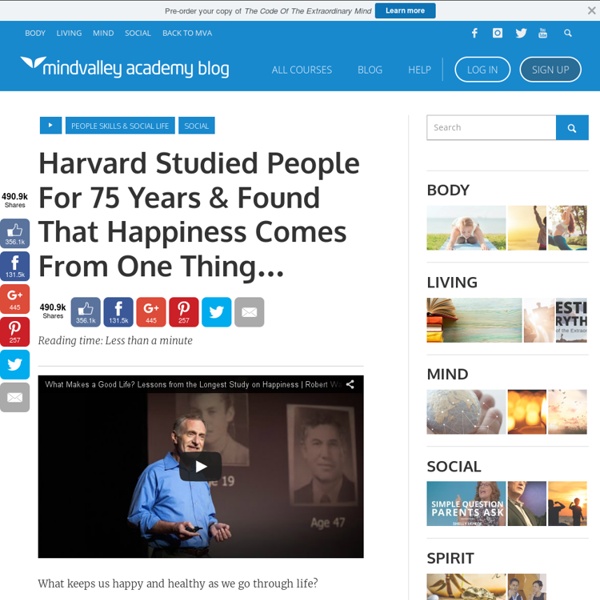 Consciousness as a Fundamental Building Block of the Universe In this wonderful TED talk, the philosopher David Chalmers invites for a new paradigm in science in which consciousness is established as a fundamental and possibly universal building block of nature. Consciousness is a fundamental aspect of our existence, says philosopher David Chalmers: “There’s nothing we know about more directly… but at the same time it’s the most mysterious phenomenon in the universe.” The nineteenth century physicist Maxwell came to the conclusion that we can’t explain electro magnetic phenomena in terms of the existing fundamentals such as space, time, mass and Newtonian laws, so he postulated fundamental laws of electromagnetism. The second idea Chalmers postulates, is that consciousness might be universal and that every system down to the elementary particles has degrees of consciousness. This view is also called panpsychism in philosophy or nonduality in the mystical traditions.

Origins - Medicine of the Person "Medicine of the Person", or rather, "Médecine de la Personne" is the title of a book published in French in 1940, by Dr Paul Tournier, a general practitioner in Geneva. At a period when psychosomatic medicine was in its infancy, he was struck by the fact that the contemporary approach to illness was purely organic, and failed to consider the patient as a whole, with not only a physical dimension but psychological and spiritual dimensions as well. He invited medical colleagues specialising in a variety of fields and also a number of philosophers to reflect on this with him and organised yearly meetings, which from 1947 onwards were attended by delegates from several countries and became known as "International Meetings of Medicine of the Person". Paul Tournier died in 1986. Medicine of the Person is not just another branch of medicine. It is an attitude towards contact, an approach to patient-care, applicable in all areas.

Conversation with Cory Taylor on Dying - WQ Uncategorized Novelist Cory Taylor (Me and Mister Booker and My Beautiful Enemy) was diagnosed with melanoma in 2005, just before her fiftieth birthday. In December 2014, she suffered a seizure and underwent surgery to remove a brain tumour. These Are The Long-Term Effects Of Multitasking Georgetown Professor Cal Newport thinks uninterrupted, distraction-free deep work is so important that if you’re unable to do this at your current job, you should start looking for another. "Many people have convinced themselves that it’s crucial that they are always connected, both professionally and socially, but the reality is that this requirement is self-imposed," he says. "Shallow tasks like reading and responding to emails or checking social media might prevent you from getting fired, but it’s deep tasks that produce the value and build the skills that get you promoted." If it’s self-imposed, like Newport suggests, then what is really preventing people from accomplishing the demanding, cognitive, head-down work that’s needed to thrive professionally? As Newport mentions in his new book Deep Work: Rules for Focused Success in a Distracted World, it’s the bouncing around from task to task, or multitasking, that deteriorates the muscle allowing you to focus.

Iora Health pioneers new primary care model BURLINGTON — A year ago, Jeffrey Davis had just about given up on going to the doctor. He was tired of waiting for physicians who always ran late, tired of being rushed through appointments, tired of never having diagnoses or treatment plans fully explained. Then a coworker suggested that Davis, 53, of Haverhill, check out the Iora Health practice in Burlington. The Disease of Becoming - AIP Lifestyle I am writing this post as much for me as you. Something to refer back to as I traverse my humanness. A very wise and loving person pointed out to me last week that I am suffering from an infliction I had not know about previously: The Great Illusion Of Becoming. This shifted my entire life perspective in one moment when the awareness of this truth sunk in. I had not realized how deep down the rabbit hole I had gone however, and became deeply humbled when I realized this belief permeated to all reaches of my life and career.

The No. 1 Predictor Of Career Success According To Network Science People in open networks have unique challenges and opportunities. Because they’re part of multiple groups, they have unique relationships, experiences, and knowledge that other people in their groups don’t. This is challenging in that it can lead to feeling like an outsider as a result of being misunderstood and under-appreciated because few people understand why you think the way you do. It is also challenging, because it requires assimilating different and conflicting perspectives into one worldview. In one of my all-time favorite movies, The Matrix, the main character, Neo, is exposed to a completely new world. Once he is, he can’t go back.