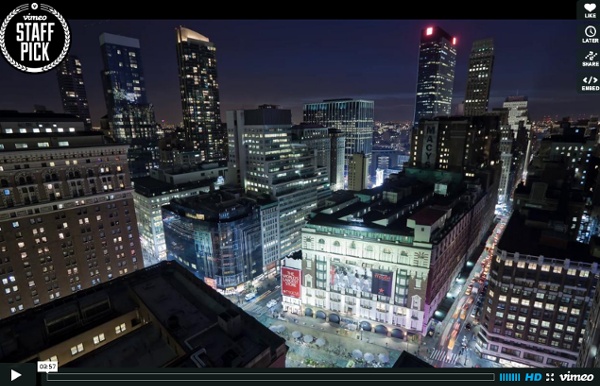 Metal Shutter Houses / Shigeru Ban Architects + Dean Maltz Architect The Metal Shutter Houses, designed by the internationally renowned Japanese firm Shigeru Ban Architects, are located on the south side of West 19th Street, between 10th and 11th Avenues in West Chelsea’s art gallery district, steps away from the High Line, the Hudson River, Chelsea Piers, and the Hudson River Park. The block offers a bold display of the new New York: the Frank Gehry-designed IAC Headquarters are next door and Jean Nouvel’s 100 11th is across the street. Low-profile warehouse buildings throughout the neighborhood allow for long city views, including the Empire State building, from each floor of the Metal Shutter Houses. This marks the first new construction condominium residences in the United States by Ban.

All the Buildings in New York…Drawn by Hand ALL THE BUILDINGS IN NEW YORK is a blog, a book, and, above all, illustrator James Gulliver Hancock’s love letter to New York City. As his website reveals, Hancock “panics that he may not be able to draw everything in the world… at least once.” Since Kindergarten, he’s been obsessed with drawing in meticulous detail (or, as he tells the Atlantic Cities, with a mix of “technicality and whimsy”), a characteristic this native Australian brought with him when he moved to Brooklyn, New York. What began as a blog, All The Buildings In New York, to keep track of his many sketches of New York’s architecture (particularly the brownstones), is now a book (All The Buildings in New York: That I’ve Drawn So Far - which includes about 500 drawings). Organized by neighborhoods, it features New York architectural icons from the past and present, including the Chrysler Building, the Flatiron, Apple’s 5th Avenue store, as well as the everyday buildings that make up New York’s unique cityscape.

101 Spring Street When Donald Judd moved into 101 Spring Street, SoHo in 1968, the neighbourhood was half-derelict and in transition. Industrial spaces recently abandoned by manufacturing businesses were occupied by artists, while some enterprises chugged on, so that most considered the area too dusty and noisy for residential use. Judd was attracted to the building’s cast iron façade, typical of the area, which would be renamed by developers and city planners the “Cast Iron District”. The façade’s abundant windows framed the details of the street beyond, while their regular grid would soon offset the measured volumes of the art Judd made and displayed there. In apertura: 101 Spring Street, New York, 5th Floor, 2013. Photo Joshua White.