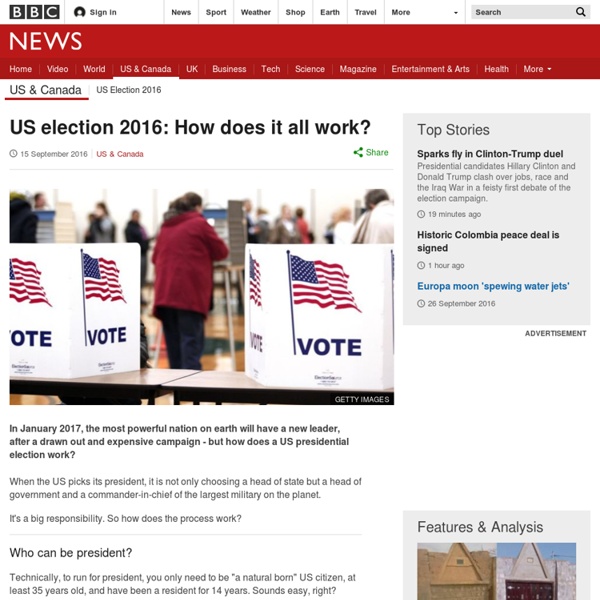 Image copyright Getty Images In January 2017, the most powerful nation on earth will have a new leader, after a drawn out and expensive campaign - but how does a US presidential election work? When the US picks its president, it is not only choosing a head of state but a head of government and a commander-in-chief of the largest military on the planet. It's a big responsibility. So how does the process work? Who can be president? Technically, to run for president, you only need to be "a natural born" US citizen, at least 35 years old, and have been a resident for 14 years. In reality, however, every president since 1933 has been a governor, senator, or five-star military general. In this 2016 election, at one stage there were 10 governors or former governors and 10 who are or were senators, although many have since dropped out. One person is nominated to represent the Republican and Democratic parties in the presidential election. How to become the president of the US What are swing states?

untitled The white working class in the US has been decimated through an epidemic of ‘premature deaths’ – a bland term to cover-up the drop in life expectancy in this historically important demographic. There have been quiet studies and reports peripherally describing this trend – but their conclusions have not yet entered the national consciousness for reasons we will try to explore in this essay. Indeed this is the first time in the country’s ‘peacetime’ history that its traditional core productive sector has experienced such a dramatic demographic decline – and the epicenter is in the small towns and rural communities of the United States. In the last few years, scores of thousands of Americas have died prematurely because of drug overdoses or toxic drug interactions, mostly related to narcotic pain medications prescribed by doctors and other providers. This is not seen elsewhere in the world at such a level.

The complete list of all 33 false things Donald Trump has said as president so far U.S. President Donald Trump makes frequent false claims about matters big and small. The Star is planning to track them all. Contact Daniel Dale at ddale@thestar.ca if you hear Trump say anything you know is false or should be checked. Last updated: Feb. 3, 2017 Scientist says he found definitive proof that God exists. One of the most respected scientists of today says he has found evidence of the action of a force "that governs everything." The theoretical physicist Michio Kaku claims to have developed a theory that might point to the existence of God. The information has created a great stir in the scientific community because Kaku is considered one of the most important scientists of our times, one of the creators and developers of the revolutionary String Theory which is highly respected throughout the world. To to come to his conclusions, the physicist made ​​use of what he calls “primitive semi – radius tachyons “.

What’s at Stake CLINTON favors raising the federal minimum wage to $12 an hour and providing more tax breaks for working families. She wants the wealthiest Americans to pay higher taxes. She also wants the government to spend more on infrastructure projects like roads and bridges to provide jobs and grow the economy. The Two Kinds of Trump Voters It’s the hottest question in Washington: Will white working-class voters still support President Donald Trump in four years if he can’t deliver on his campaign promises? Republicans want to know whether they can keep these voters while deep-sixing Trump’s protectionist and Big Government ideas; Democrats, for their part, are asking whether it is worth courting white working-class support at all. If these perplexing voters have crossed the aisle for good, then Democrats can consolidate their support from minorities and urban cosmopolitans and seek to broaden their appeal to centrists wary of Trump’s instability and radicalism. Story Continued Below But before Democrats decide whether or not to abandon white working-class voters altogether, here’s something they need to keep in mind: Trump’s base is not a monolith.

Globalisation as we know it is over – and Brexit is the biggest sign yet In among the shock from the EU referendum result, the risk of contagion was raised. Analysts asked which EU country might leave next and whether this unravelling could shatter the postwar European order. A month later, it’s clear that Brexit was less a cataclysmic cause than a symptom; a manifestation of global forces unleashed by the 2008 global financial crisis, including slower growth, rising inequality, and a widening backlash against open borders and incumbent leaders.

Topics in US History: Political Parties - The Edge Hi! This is Adam, AP/IB History, English Literature and English Language & History tutor at The Edge Learning Center. Below, I’ve written a brief history of political parties in the US. The development over time of political parties is one of the most complicated yet significant topics in United States History. In his farewell address, George Washington warned the people of the perils of partisan disunity, but today America is at least in part defined by its Red State/Blue State divide. For students of history, knowing about the rise, fall, shifting, and flip-flopping of domestic political parties within the two-party system remains a pivotal skill in understanding the history of America.

A Newsweek reporter is suing the federal government to learn how it vetted Trump's advisers for security clearances — Quartz As Donald Trump lunches with Japanese prime minister Shinzo Abe, reportedly to talk about the future of global trade, it’s worth assessing whether or not the new US president will really attempt to renegotiate an important trade pact closer to home: the North America Free Trade Agreement (NAFTA) between the US, Canada, and Mexico. NAFTA, since it already governs a significant share of economic activity, matters much more than Trump’s decision to officially pull out of the Trans-Pacific Partnership, a not-yet-sealed deal that looked unlikely to come into force regardless of who won the US election. But shaking up NAFTA would have real effects on existing business—which is why Trump will likely prefer cosmetic changes to it over doing anything meaningful. Trump has talked tough, against Mexico specifically, about renegotiating NAFTA. But there’s plenty of reason to believe that Trump will bow to special-interest concerns supporting the pact as is.

untitled According to wikipedia, Globalisation is the process of international integration arising from the interchange of world views, products, ideas and other aspects of culture. However, over the last ten years there has been a sea change decline in all the indicators that would measure the success of this model. Democracy, economic growth, freedom and an interchange of world views and culture has all but been abandoned to a vice like grip of globalisation driven more by the corporate principles of power and greed resulting in war, terrorism, a biblical refugee crisis, fear and a fully co-opted media. The Economist has just published its annual index on democracy. Why the Donkey and Elephant? The Donkey— Presidential candidate Andrew Jackson was the first Democrat ever to be associated with the donkey symbol. His opponents during the election of 1828 tried to label him a "jackass" for his populist beliefs and slogan, "Let the people rule." Jackson was entertained by the notion and ended up using it to his advantage on his campaign posters. But cartoonist Thomas Nast is credited with making the donkey the recognized symbol of the Democratic Party. It first appeared in a cartoon in Harper's Weekly in 1870, and was supposed to represent an anti-Civil War faction. But the public was immediately taken by it and by 1880 it had already become the unofficial symbol of the party.

Historian Richard Evans says Trump’s America isn’t exactly like the Third Reich—but it’s too close for comfort. Torsten Silz/Getty Images Richard Evans established himself as arguably the pre-eminent historian of 20th-century Germany with his astonishing trilogy on the rise and fall of the Third Reich. Beginning after the cataclysm of the First World War with The Coming of the Third Reich; continuing with the Nazi regime’s first six years in power; and concluding with Nazism’s military aggression, genocide, and eventual defeat, Evans’ books explore Germany from the perspective of both its leaders and its citizens, including perpetrators, victims, and everyone in between. Isaac Chotiner is a Slate staff writer. America is not Germany, and this is not 1938, let alone 1933. But as an expert on fascism and as a historian who has written about how authoritarian regimes accumulate power, Evans has particular insight into the early days of the Trump administration.