WHO: Cell phone use can increase possible cancer risk 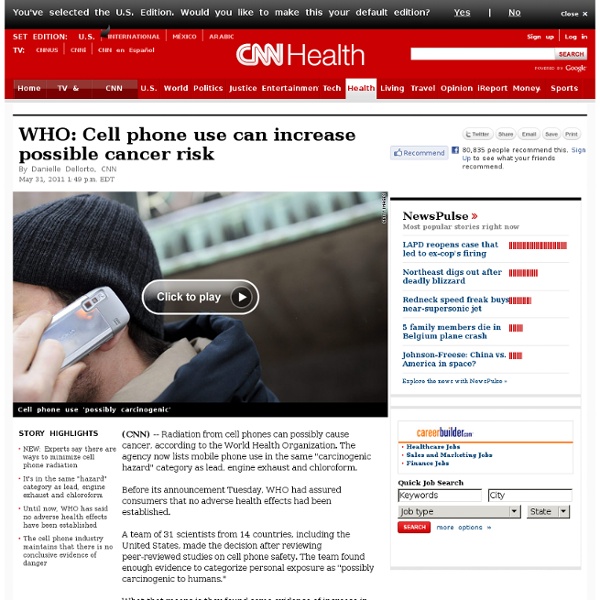 Cell phone use 'possibly carcinogenic' NEW: Experts say there are ways to minimize cell phone radiation It's in the same "hazard" category as lead, engine exhaust and chloroformUntil now, WHO has said no adverse health effects have been establishedThe cell phone industry maintains that there is no conclusive evidence of danger (CNN) -- Radiation from cell phones can possibly cause cancer, according to the World Health Organization. The agency now lists mobile phone use in the same "carcinogenic hazard" category as lead, engine exhaust and chloroform. Before its announcement Tuesday, WHO had assured consumers that no adverse health effects had been established. A team of 31 scientists from 14 countries, including the United States, made the decision after reviewing peer-reviewed studies on cell phone safety. "The biggest problem we have is that we know most environmental factors take several decades of exposure before we really see the consequences," said Dr. Is your cell phone safe? Dr.

Metaphysical Causes of Disease and Illness - mind body link Throughout this site I have emphasised that failure to deal with spiritual,emotional,mental or physical issues is likely to result in the manifestation of illness or dis-ease in the body. Deep down most of us know that there is a link between how how we live our lives and our health. Many spiritual groups and individual teachers have used their experience to help catogrise the relationship between metaphysical issues and how they may manifest in the body. Perhaps the seminal work in this area was the book "Heal Your Body" by Louise Hay which lists all the common illnesses and diseases and suggest the possible metaphysical cause. If you have an interest in this linkage you can buy "Heal Your Body" by Louise Hay here or her best selling "You can Heal Your Life" which includes this list in the back. Our minds and our bodies are linked. It is important however to remember that illness, disease and death are all part of life.

Natural Tooth Cure for Curing Cavities and Preventing Root Canals (NaturalNews) It is not true that conventional dental treatments and fluoride are the only ways to heal your teeth from cavities. When struck with the diagnoses of a dental cavity, most people feel totally helpless or powerless to do anything about it themselves. The common belief about tooth decay is that once you have a cavity, the tooth cavity cannot heal or reverse. The only solution seems to be to rush off to the dentist and have a synthetic material placed in your teeth to cover the breached tooth structure. No longer should we continue to accept dental surgery or the dangerous chemical, fluoride, as our only hope and solution for tooth decay. People go to dentists for regular check-ups, or because they have tooth pain or gum swelling. Or is it? I began investigating tooth decay, and health in general, because my own daughter was afflicted with tooth decay at the age of one. I knew that the current theory was wrong because it did not explain my daughter's tooth decay.

Guest Post: A Doctor on Transvaginal Ultrasounds A friend of mine is a physician who wants to speak about transvaginal ultrasounds but whose position makes it precarious to speak publicly about it. So I’m letting this doctor borrow my site for an entry to speak anonymously on the matter. Obviously, I will vouch for the doctor being a doctor and being qualified to speak on the subject. Update, 9:14pm: This post is being linked to far and wide, so we’re getting lots of new readers and commenters. It’s important that before you comment you read the site disclaimer and comment policy. Update: 12:13am, 3/21: I’m going to bed, so I turned off the comments for the night. Update: 1pm, 3/21: As a head’s up to people, at 8pm eastern time tonight, I will turning off the comments for this thread permanently. Update: 8pm, 3/21: Comment thread is now closed. Right. I’m speaking, of course, about the required-transvaginal-ultrasound thing that seems to be the flavor-of-the-month in politics. I do not care what your personal politics are.

How to Treat Tachycardia – Home Remedies Tachycardia is an accelerated heart rate – specifically it is classified as any heart rate that exceeds 100 beats per minute at its base level which puts it above the normal range. There are many causes of tachycardia such as poor circulation, high blood pressure/cholesterol, low potassium or arrhythmia. Symptoms include a 'fluttering feeling in the chest', difficulty catching your breath, irregular heartbeat, pain in the chest and light headedness. In serious cases doctors may put you on a course of medication (adenosine), or may recommend heart surgery (cardioversion). Note: Bear in mind that the normal heart rate is faster in young children – 100 is the highest normal-range for adults over 15 years of age but up to 130 is normal for most children and not considered tachycardia. Avoid Stimulants: The last thing you want if you have an elevated heart rate are stimulants which cause your heart to pump faster still by speeding up your metabolism and releasing adrenaline.

Health - Nikhita Venugopal - Make Some Noise: Treating Mental Disorders With the Power of Music For some children on the autistic spectrum, music's clearly defined rules can improve social ability better than any standard treatment. Lesly Weiner Jaden raced into the room, his bare feet stomping on the carpeted floor. His wavy brown hair flopped around as he made a beeline for the brown piano at the center of the music therapy room at the Rebecca School in Manhattan, a school for children with neurodevelopmental disorders. For the last four years, Jaden has been attending the school for music therapy - broadly defined as the clinical use of music for treatment of people with mental, physical or emotional issues. The term "music therapy" first appeared in The Columbia Magazine back in 1789, but it wasn't until the 1940s that music therapy began to emerge as a clinical profession when hospitals used music to treat World War II soldiers suffering from shell shock. Jaden hasn't been diagnosed with autism, though he exhibits most of the criteria associated with the disorder, said Tippy.

Improved outcome in shigellosis ass... [Proc Natl Acad Sci U S A. 2006 MedTempus: Blog de medicina Anger Management: Tips and Techniques for Getting Anger Under Control Understanding anger The emotion of anger is neither good nor bad. It’s perfectly healthy and normal to feel angry when you’ve been mistreated or wronged. The feeling isn't the problem—it's what you do with it that makes a difference. Anger becomes a problem when it harms you or others. If you have a hot temper, you may feel like it’s out of your hands and there’s little you can do to tame the beast. Myths and Facts about Anger Myth: I shouldn’t “hold in” my anger. Fact: While it’s true that suppressing and ignoring anger is unhealthy, venting is no better. Myth: Anger, aggression, and intimidation help me earn respect and get what I want. Fact: True power doesn’t come from bullying others. Myth: I can’t help myself. Fact: You can’t always control the situation you’re in or how it makes you feel, but you can control how you express your anger. Myth: Anger management is about learning to suppress your anger. Fact: Never getting angry is not a good goal. Why anger management is important

Calm Clinic The Burden of Disease and the Changing Task of Medicine At first glance, the inaugural 1812 issue of the New England Journal of Medicine and Surgery, and the Collateral Branches of Science seems reassuringly familiar: a review of angina pectoris, articles on infant diarrhea and burns. The apparent similarity to today's Journal, however, obscures a fundamental discontinuity (1812a, b, c; see Historical Journal Articles Cited). Disease has changed since 1812. People have different diseases, doctors hold different ideas about those diseases, and diseases carry different meanings in society. To understand the material and conceptual transformations of disease over the past 200 years, one must explore the incontrovertibly social nature of disease. Disease is always generated, experienced, defined, and ameliorated within a social world. Epidemiologic Transitions Causes of Death in 1811. A century later, the infections that filled the Journal had been redefined according to specific microbial causes. Definitions and Consequences The Roles of Medicine