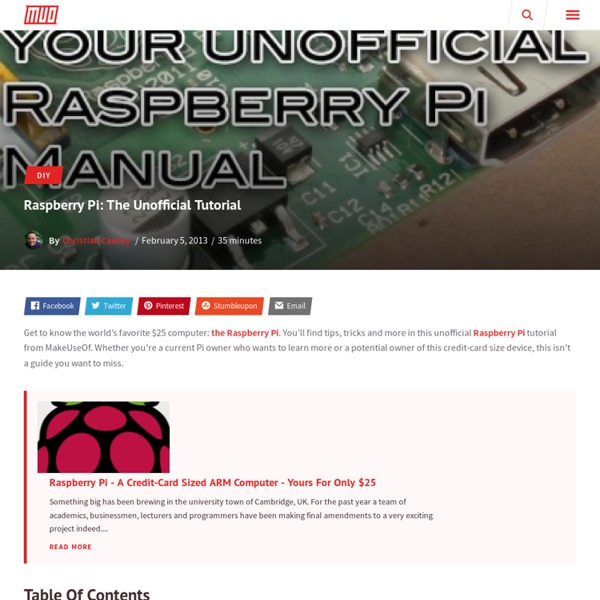 Advertisement Get to know the world’s favorite $25 computer: the Raspberry Pi. You’ll find tips, tricks and more in this unofficial Raspberry Pi tutorial from MakeUseOf. Whether you’re a current Pi owner who wants to learn more or a potential owner of this credit-card size device, this isn’t a guide you want to miss. Raspberry Pi - A Credit-Card Sized ARM Computer - Yours For Only $25 Raspberry Pi - A Credit-Card Sized ARM Computer - Yours For Only $25 Something big has been brewing in the university town of Cambridge, UK. For the past year a team of academics, businessmen, lecturers and programmers have been making final amendments to a very exciting project indeed.... Table Of Contents §1–The Raspberry Pi §2–What’s Inside the Pi? §3–What You Will Need for Your Raspberry Pi §4–Setting Up the Raspberry Pi §5–Getting to Grips with the GUI §6–Programming on the Pi §7–Configuring the Pi as a Media Centre §8–Fascinating Uses for the Raspberry Pi §9–Raspberry Pi: A Versatile Mini Computer 1. 2. 3. 4.

Adblock Everywhere: The Raspberry Pi-Hole Way Turn a cheap Raspberry Pi into a network-wide ad blocker. If you’re tired of AdBlock Plus slowing your browser down, this DNS-based option is a great alternative that works on any device. Unlike other solutions, this filters the web before it gets to your device, meaning you can block ads on your iPad or Android without the need for jailbreaking or rooting. A company called AdTrap sells a little white box that blocks ads for $129, but you shouldn’t buy it – a $35 Raspberry Pi and an SD card are all you need to make your own hardware ad blocker for every device on your network.

PIC Tutorial You may know that when it comes to machines, programming is often used to tell the machine how to interact with its world. But have you ever wondered how this programming is actually physically implemented? One way is to use PICs (Programmable Interrupt Controllers). These chips allow you to write code that reads input signals, performs functions and sends signals to outputs based on conditions that you define. This tutorial will explain the basic process of writing programs for PICs and “burning” those programs to the device. 15 Useful Commands Every Raspberry Pi User Should Know If you’re using a Raspberry Pi computer for your weekend project (perhaps a media centre or a home server) then there is a good chance these useful command line instructions will save you some time. The Raspberry Pi: Yes, It’s Linux You’ve imaged your SD card and booted your Raspberry Pi.

OpenHAB Beginner's Guide Part 2: ZWave, MQTT, Rules and Charting Advertisement Free doesn’t always mean “not as good as paid”, and OpenHAB is no exception. The open source home automation software far exceeds the capabilities of any other home automation system on the market – but it’s not easy to get set up. In fact, it can be downright frustrating. Download this entire article as a PDF. Feel free to share it with your friends and family.

Raspberry Pi Way back when the Kinect was first released, there was a realization that this device would be the future of everything 3D. It was augmented reality, it was a new computer interface, it was a cool sensor for robotics applications, and it was a 3D scanner. When the first open source driver for the Kinect was released, we were assured that this is how we would get 3D data from real objects into a computer.

Raspberry Pi Shairport build instructions - Useful Snippets 2013-08-31 This post has been updated with new build instructions. Below you will find instructions on how to build the Preconfigured Airplay speaker (Shairport) image. You may also find a thread about this build in the Raspberry Pi Forums. The image assumes you’re starting out with the the standard Raspbian install. Raspberry-Pi / SMS Alarm System - jfpayeur # My first python project # # Sources and Ref.#

Getting Started with OpenHAB Home Automation on Raspberry Pi Advertisement OpenHAB is a mature, open source home automation platform that runs on a variety of hardware and is protocol agnostic, meaning it can connect to nearly any home automation hardware on the market today. If you’ve been frustrated with the number of manufacturer specific apps you need to run just to control your lights, then I’ve got great news for you: OpenHAB is the solution you’ve been looking for – it’s the most flexible smart home hub you’ll ever find. Setting Up Wireless Networking on Your Raspberry Pi Virtually every Raspberry Pi project will require a network connection, and considerable flexibility can be gained by ignoring the Ethernet port in favour of a wireless USB dongle. Knowing which one to use and how to set it up could be make or break for your project. Ethernet Or Wireless? When you first acquire your Raspberry Pi, the best option is to use an Ethernet connection to ensure the operating system is correctly configured and up-to-date. You can then move onto a wireless USB connection once you’re happy. The benefit of Ethernet over wireless LAN on the Raspberry Pi – as with most other platforms – is that there is zero configuration required.

Creating a LAMP server (web server - Linux Apache Mysql PHP) on the Raspberry Pi - Linux tutorial from PenguinTutor This provides details of how to configure a Raspberry Pi as a webserver. This is similar to the guide to using Xubuntu as a LAMP webserver, but adds some of the things that need to be handled differently for the Raspberry Pi. It is termed a LAMP server which is one of the most common configuration for webservers which standard for: Linux – operating system Apache – webserver (http) software Mysql – database server PHP or Perl – programming languages