If you thought solar was going to hurt utilities, get a load of solar+storage 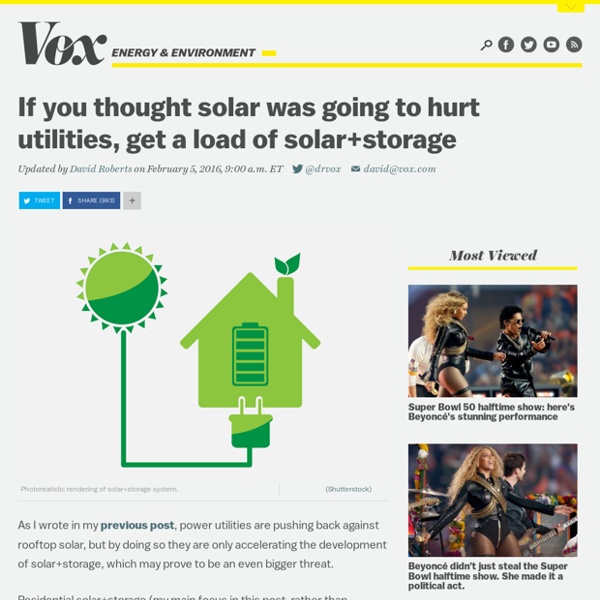 As I wrote in my previous post, power utilities are pushing back against rooftop solar, but by doing so they are only accelerating the development of solar+storage, which may prove to be an even bigger threat. Residential solar+storage (my main focus in this post, rather than commercial or utility-scale versions) refers to a) an array of rooftop solar panels connected to b) some means of energy storage, usually a battery or batteries, controlled by c) smart software that enables the system to communicate with the grid. Adding storage to solar radically expands its value — the whole is more than the sum of the parts. The ability to store energy gives the solar homeowner more control over her energy; she can shift her time of use, storing power when it's cheap and selling it when it's more expensive. And she can potentially participate in larger markets, as we'll see later. It's pretty cool. But it's also expensive as hell at the moment. (Shutterstock) The value of solar+storage Backup power

The Independence of Localized Power Grids - HowStuffWorks Fortunately for the American public, the move toward a more dependable and efficient power grid isn't a mere grassroots movement. The U.S. Department of Energy is currently pursuing a strategy to create a smart grid, an automated, cleaner and less-centralized means of meeting the nation's energy demands. For more information on this undertaking, read "How the Smart Grid Will Work." The idea of a localized power grid or microgrid fits into this overall strategy in several key ways. First, the more power produced on a local level, the less a community will need to import from outside power plants or leech off the network.

Nanodot-based smartphone battery that recharges in 30 seconds I think this has a wide range of uses and a lot of potential. It would make hybrids use electric power more than the gas engine. It would be a boost for anything that is battery powered. BigGoofyGuy 7th April, 2014 @ 5:53 a.m. (California Time) This huge, woohoo if they can make large units for storing solar energy cheaply and cleanly. I'll hold off bying my electric car for a couple of years until this avail!

SunEdison Storage Last month, we predicted that one of the country’s big vertically integrated solar companies would make a move into the energy storage business this year by acquiring a U.S.-based storage company. Here’s the first. On Thursday, solar (and wind) giant SunEdison announced it was acquiring the project development team, four existing projects, and roughly 100 megawatts of project pipeline of Solar Grid Storage. The Philadelphia, Pa.-based startup specializes in packaging lithium-ion batteries and inverters with commercial solar PV projects -- and paying their way by providing lucrative frequency regulation services in the market run by mid-Atlantic grid operator PJM.

Micromanaging the Microgrid - HowStuffWorks One of the key advantages to the microgrid approach is that it allows local users to make smarter choices regarding their use of power, turning them from cowering subjects under an all-powerful king to empowered consumers in a flexible energy economy. It's the difference, again, between growing a small plot of tomatoes for local use and running an industrialized farm. Which farmer can really claim to have a hand in the rearing of his or her crops?

Even Without Subsidies, Energy Storage Is Starting to Rival Conventional Resources The economics of storage aren't easy to model. The technology can be used for so many applications -- frequency regulation, equipment upgrade deferral, backup power, renewable energy integration, or peaking power -- that it can be hard to compare storage to conventional generation. The technologies themselves are just as diverse. But the analysts at the financial advisory firm Lazard just did it. Clean Energy Storage inc. - Energy Storage, Powergrid, Energy Storage Systems ​​The POWERGRIDTM is Energy Storage Redefined! 3rd Generation LiFeMnPO4; The PowerGrid is on the leading edge of technology that is tailored for each individuals power habits and consumption needs. Each PowerGrid is built and delivered as a turn key system with all the programming, battery management system and necessary interconnection hardware with UL listings. The PowerGrid has been deployed throughout the World, including California where it's customers have enjoyed the SGIP State rebates.

How Microgrids Work This week we’re celebrating the launch of a new series on Energy.gov: How Energy Works. Join us today on Twitter at 2 p.m. ET for our How Energy Works live Q&A answering everything you want to know about microgrids. Use #HowEnergyWorks to submit questions and follow the live discussion. The Future of Energy Storage Is Behind the Meter Today, energy storage is often described as new, emerging or risky. But tomorrow, one word will suffice: mainstream. In California, we have a near perfect storm of market signals moving the entire energy storage industry forward. On the hardware side, OEMs (battery and inverter manufacturers) have significantly reduced costs, while forward-thinking policymakers and financiers are creating favorable regulatory and market conditions.

Solar Paper turns the page on portable solar chargers While there's a healthy selection of compact solar panels to keep our mobile gadgets charged up – light permitting – the vast majority of these are either too small to be effective or too bulky for carting around. The creators of Solar Paper are looking to buck this trend with a portable solar charger that generates up to 10 W of power, yet is lighter than an iPhone 6 Plus and only slightly wider and longer. So called because its panels are thing enough to slot between the pages of a notebook, and touted as the "world's thinnest and lightest solar charger" by its creators, Yolk, Solar Paper measures 9 x 19 x 1.1 cm (3.5 x 7.5 x 0.4 in) and weighs 120 g (4.2 oz), while the actual solar panels are only 1.5 mm thick.

Warren Buffett: Solar and Wind Could ‘Erode the Economics of the Incumbent Utility’ Billionaire investor Warren Buffett says that renewable energy and efficiency are pushing utilities beyond a "sloppy" operational model and into a more competitive environment. In his annual letter to Berkshire Hathaway shareholders, Buffett outlined the risks posed by distributed generation to traditional power companies. Berkshire Hathaway, a multinational holding company worth nearly $200 billion, owns 10 energy companies, including three large electric utilities serving territories across 11 Midwestern and Western U.S. states. The business of electricity is entering a period of uncertainty, wrote Buffett. "In its electric utility business, our Berkshire Hathaway Energy (“BHE”) operates within a changing economic model. Historically, the survival of a local electric company did not depend on its efficiency.

Microgrid Investments Are Advancing Smart Grid 2.0: What Internet of Things Investors Need to Know The Internet of Things will have many impacts on our daily lives and some may do so in invisible ways. One impact could be in energy and the next generation of the electric grid. As more homeowners and businesses become energy producers with solar energy and small-scale wind, they create a problem for electric utilities and an opportunity for new technologies to impact our energy future.

How Sustainable is Stored Sunlight? Picture: Tesla's lithium-ion home storage system. In the previous article, we have seen that many life cycle analyses (LCAs) of solar PV systems have a positive bias. Most LCAs base their studies on the manufacturing of solar cells in Europe or the USA.