How social media is transforming the fashion industry 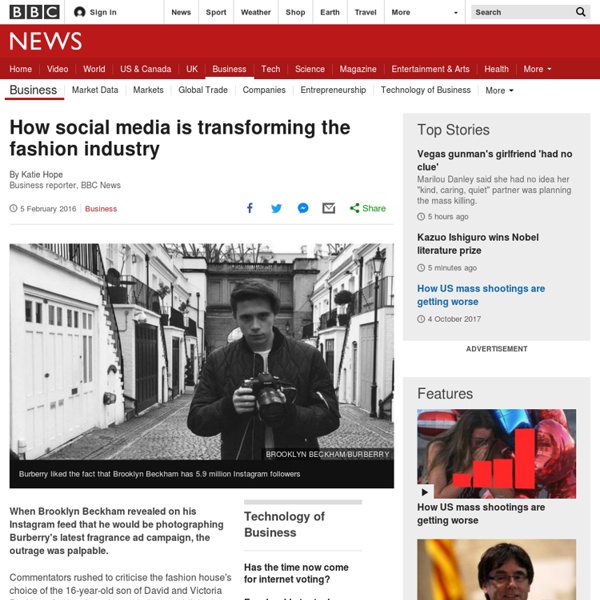 Image copyright Brooklyn Beckham/Burberry When Brooklyn Beckham revealed on his Instagram feed that he would be photographing Burberry's latest fragrance ad campaign, the outrage was palpable. Commentators rushed to criticise the fashion house's choice of the 16-year-old son of David and Victoria Beckham for the shoot, instead of an established industry professional. "Insulting to every artist out there"; "completely disrespectful to the artist community"; and "so tired of these celebrities buying their kids into everything" were some of the printable reactions. But Burberry boss Christopher Bailey suggested it might have been Brooklyn's 5.9 million Instagram followers, rather than his parents, that got him the gig. "Brooklyn has a really great eye for image and Instagram works brilliantly for him as a platform to showcase his work," he said. Image copyright Brooklyn Beckham / Burberry Model behaviour The influence of social media has also rapidly changed how models are chosen.

Asos reveals it has cut marketing spend by 16% as it continues to focus on lowering prices Asos posted a 10% decline in first-half profit to £18m for the period, despite increasing group sales by 14% to £550.5m. Even though it posted a fall in profits, the retailer, which issued three profit warnings last year, marginally beat analyst forecasts of £16.3m in pre-tax profits. “Spend on international marketing campaigns was limited during the period whilst we focus on restoring the price competiveness of our products,” said Nick Robertson, Asos chief executive. “Our digital marketing activities have however continued in order to drive awareness and grow our market share.” Robertson said that earnings were hit by the roll out of Asos’ “zonal pricing” mechanism. The system will allow the business to adjust prices in each international market and utilise savings generated by renewed investments in its distribution network.

Fashion Industry Problems In 2016 It’s been a huge year for the fashion industry. Filled with designer shakeups (Lanvin! Gucci! Balenciaga!), the demise of Lucky, and, lots of bizarre drama involving none other than Dov Charney, the headlines gave us plenty to talk about over the past 12 months. But even though this is an industry that loves to gossip, there are a handful of conversations that consistently get swept under the rug.

Are Camera Phones Killing Fashion? LONDON, United Kingdom — Wow! All those live social media reports from Fashion Weeks in London, New York, Paris and Milan. It’s like actually being there — if you’re Velma from Scooby Doo, you’ve lost your glasses and you’ve taken ketamine. Take a look at the images above — screengrabs from the Twitter feeds of some of the most heavyweight news outlets and fashion magazines in the world. Social media listening means big business for retailers Modern retailers thrive on online reviews, social media commentary and customer feedback, using insights gleaned from these sources to change the way they do business. From e-commerce giants to local bookstores, retailers are using the data they get from shoppers to create a feedback loop of personalised recommendations and promotions, and to improve the service, merchandise and prices they offer. But some believe digital communications are an impersonal and remote way for retailers to create meaningful relationships with customers, preferring a human interaction. Waterstones managing director James Daunt, who has moved the bankrupt bookshop chain into profit since taking over five years ago, says: “Unlike our domestic and international peers, our shops are resolutely old fashioned. Social media listening So how far can the explosion of online reviews, social media chatter and other data collected via digital communications help retailers improve the service they offer?

Going forward with the GST in fashion - Fashion The introduction of the new tax system is expected to have an impact on style. YOU can always count on certain fashion items to remain as staples over the years. One very good example is the classic “little black dress” that every woman surely has in her wardrobe. That said, not everything stays the same. The cost of looking stylish, for instance, goes up as time passes. While a change in prices is nothing extraordinary as a gradual inflation is to be expected, a sudden increase can be daunting. Asos: ‘We are investing in price first and marketing second’ Speaking on a conference call following the announcement of its first quarter results this morning (9 December), Robertson said Asos will be investing the £6.3m it collected in insurance payouts following a fire at its Barnsley distribution centre straight into price, rather than putting it into other areas such as marketing or new customer services. “We did consider putting it elsewhere but our principles are about put it back into customer pricing first so we have pricing in the markets we are comfortable with. We have a number of proposition changes landing in the Eurozone anyway and so it was price first then come back round to further customer acquisition-building activity through marketing second,” he added. Mobile shift “intensifies”

Mass Market Retailer Definition Mass customization is the process of delivering wide-market goods and services that are modified to satisfy a specific customer need. Mass customization is a marketing and manufacturing technique that combines the flexibility and personalization of custom-made products with the low unit costs associated with mass production. Mass customization products may also be referred to as made to order or built to order. BREAKING DOWN 'Mass Customization' Mass customization allows a customer to customize certain features of a product while keeping costs closer to that of mass-produced products. In some cases, the components of the product are modular.

Global luxury market worth 224 billion, top 20 brands The global luxury goods market last year grew by 3% to a size of €224 billion. Accessories remains the largest luxury product segment, while airports and online market places continue to increase market share. The Chinese market has been slow to grow, but consumer spending is expected to increase, while Europe and Japan are mainly tourist growth based. LVMH, Richemont and Hermès are globally the largest luxury brands. The luxury and cosmetics industry has enjoyed double digit growth over the past decade fuelled by the “retail rush,” providing retailers the opportunity to capture the world’s growing middle class through brand extensions and the quest for the highest product positioning.

How fashion brands are taking Instagram from gimmick to strategic London Fashion Week is officially kicking off tomorrow (18 February), which can only mean one thing – fashion brands are working overtime. Besides putting the final touches on runway frocks, these days social media campaigns are equally as important. After all, a well-landed social campaign can see any fashion brand hit headlines, create a buzz as well as result in coveted consumer engagement. This year, Instagram seems to be the fashion world’s platform of choice. Figures by digital marketing agency Greenlight show that there have been 5,602 Instagram posts using #LFW2016 in the month leading up to London Fashion Week 2016, compared with 1,178 Twitter mentions over the same timeframe. The Unexpected Costs of Being a Fashion Blogger Fashion blogging sounds like a pretty sweet gig, right? How fun would it be to sit front row at the shows, be flown by brands to exotic locales for events and spend a good chunk of your time playing dress up while your boyfriend snaps photos of your outfit combinations? And while fashion blogging is all of those things in the eyes of many, it's also a profession for a select few. As one rises up the blogging ranks, the job becomes a job -- with real responsibilities. And a significant amount of expenses.

Why H&M is removing plus size clothing from some of its stores Getty Advertisement - Continue Reading Below H&M is under fire today for deciding to remove its plus size clothing from all of its 11 stores in New York City. Revelist discovered that H&M had quietly pulled the range from the stores months ago, after asking shop assistants where the clothing had gone. When H&M were asked why they made the decision, this is what they said: "H&M's product range has grown in the past few years, with e.g. an extended sports offering, a new beauty assortment and our interior concept H&M Home.