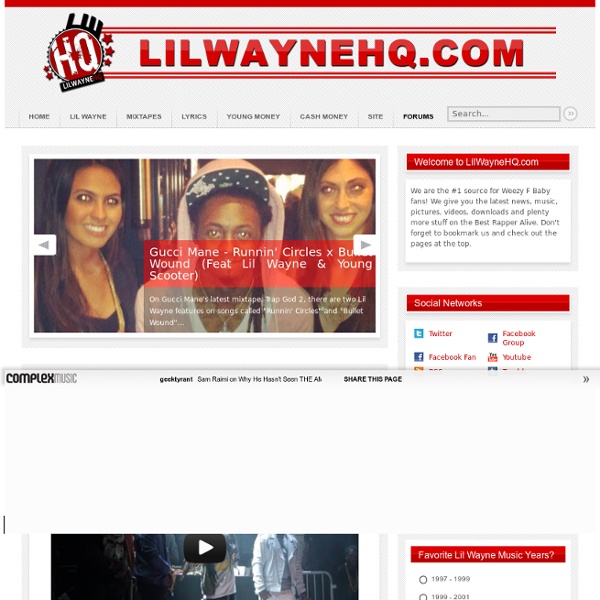 Artist Profile: Marcus Marcell Marcus Marcell served in the Army for 18 years. He along with Several Producer's and Artist have been working in the Inland Empire and sound labs in Los Angeles, California since 1996. He recently obtained his Bachelors of Science degree in business at Grand Canyon University in 2012. January Marcus is pre-releasing his hit single "Facebook Friends" to entice audiences worldwide. This song has smooth vocals with sultry undertones. Listening to this offering of new age co-mingling of R&B/Hip-Hop, there is a sense of return to a more complete sound within the two separate but often co-joined genres. Marcus Marcell's music is available digitally and physically at most digital storefronts including his official website marcusmarcellmusic.com.

Drizzy Drake Rapper Fansite | New Lyrics, Songs, Music, Mixtapes, Pictures & More Album review: Kelly Price 'Sing Pray Love Vol.1: SING' Album review: Kelly Price 'Sing Pray Love Vol.1: SING' Seven-time Grammy nominated singer/songwriter Kelly Price is slated to release her seventh album entitled "Sing Pray Love Vol.1: SING" June 3 via eOnemusic. This 11 track story is a blazing mix of uptempo danceable songs commingled with gospelesque undertones on select pieces. All of these things combined in one space create, a soul grabbing, vividly clear musical saga from one of the most sonically perfect voices in the business today. Like the perfect play list, Sing, Pray, Love: Vol 1 SING features songs that are authentic, optimistic and resolved. This forthcoming seventh album by Kelly Price is filled with refreshing R&B songs sprinkled with gospel undertones of hope, faith and determination. Kelly left it all in the ring with this one…the journey was exciting, thought provoking and evoked relevant mental images from my past…definitely not an album solely for women. Overall Rating: 4 out of 5 Hypes, because nobody is perfect.

Newton's Laws of Motion The motion of an aircraft through the air can be explained and described by physical principals discovered over 300 years ago by Sir Isaac Newton. Newton worked in many areas of mathematics and physics. He developed the theories of gravitation in 1666, when he was only 23 years old. Some twenty years later, in 1686, he presented his three laws of motion in the "Principia Mathematica Philosophiae Naturalis." The laws are shown above, and the application of these laws to aerodynamics are given on separate slides. Newton's first law states that every object will remain at rest or in uniform motion in a straight line unless compelled to change its state by the action of an external force. The second law explains how the velocity of an object changes when it is subjected to an external force. F = m * a For an external applied force, the change in velocity depends on the mass of the object. The third law states that for every action (force) in nature there is an equal and opposite reaction.

On the ones and twos with DJ A-Tron Background Celebrity DJ, DJ A-Tron (born Aaron Williams in South Central Los Angeles, CA) is one of the hottest DJ's on the market doing parties and events with everyone from A-list celebrity kids, to hip-hop’s hottest artists including A$AP Rocky, Rich Homie Quan, Nipsey Hussle, & many more. The 21 year old has strong online following with over 80K followers on his verified Twitter, and hundreds of thousands of listens on his Soundcloud , where he debuts his infamous mixes. He's featured in LA Weekly as the "Party Starting Twerk King of LA", and in XXL as “One of LA’s most popular function DJ’s”. With his notorious mixes, and "ratchet" and "twerk" music influences, A-Tron is one of the front-runners for the resurgence of the west coast hip-hop scene. What is the significance of your name and how did you get that name? My name is inspired by the 1982 movie Tron, which was before my time. Describe your style? My style entails a lot of looping, sampling, and blends. Live Djing off tops !

Industry Profile: Music Supervisor Mark Wike Music Supervisor/ Mark Wike Credits / NCIS: Los Angeles, Damages, The Sitter, The Bag Man, Hung, Legit, The Riches, Staten Island Summer, Rock The Bells.... It all started when / My band, The Bogmen were on tour in support of our debut album on Arista Records. Soon after, director/producer friends asked me to help out with music on their indie features so I felt this was the perfect opportunity to not only create a new path on the side of the band but I swore to never let a band get f*cked out of such huge opportunities as film and tv placements. Years later, we became friendly with Peter Farrelly who told us they tried hard to keep our song in the film but one of the licensors asked for too much money. Music suping allows me to time and time again right that wrong for so many artists. Songs I am digging / Jagwar Ma. Independent artists you are listening too:. 1. Artist: Cash + David 2. Artist: NO Mainstream, pro artists you are listening too: The mainstream & indie lines are a bit blurry. 1.

The Hype Magazine Interview Bobby V Soulful crooner Bobby V came on with a vengeance with his newest project “Peach Moon” which is full of the rich warmth of live instrumentation. His single “Back to Love” is sweeping the R&B world with its grown folks presentation and sound. Bobby V gave us the inside track on how he adjusted his sound to reflect his maturity and taking responsibility for his lyrics. Read More about Bobby V Here: Interviewed By: Jerry Doby Option 1: View on Issuu.com at No Cost To You! Option 2: Purchase The Hype Magazine (Print on Demand/Digital) www.thehypemagazine.com - Bobby V Issue ft. Tags: Bobby V Issue ft.

The Hype Magazine Interview K Camp K Camp is one of the young phenomenon's hitting the scene right now in the rap industry. Selling out major venues, bringing the crowd to their feet with his addictive delivery, the young man is one to watch in no uncertain terms. Getting a chance to meet the rising star in Atlanta face-to-face, let me get a sense of his self assured bearing and humble demeanor even though he's one of the hottest freshmen in the game right now. I found him self-aware, willing to burn the candle at both ends to make his career pop…I gained an instant respect for him. Read More about K Camp Here: Interviewed By: Jerry Doby Option 1: View on Issuu.com at No Cost To You! Option 2: Purchase The Hype Magazine (Print on Demand/Digital) www.thehypemagazine.com - Bobby V Issue ft. Tags: Bobby V Issue ft.

HYPE Is Not Just A Magazine, It's A Brand: #1 Digital Magazine - Eco - Friendly - CD Mixtape Magazine - News From Hip Hop to Hollywood - Booking - Promotions - Videos Hosting & More Review - CMG Presents Chapter One Review - CMG Presents Chapter One L.A. Reid made a bold move when he recruited Yo Gotti and brought the CMG label into the Epic Records fold. Gotti made a wise business move when he signed his multi-million dollar deal with the powerhouse imprint from the Sony Music Entertainment family. Next, Gotti snatched up the hottest talent he could find and proceeded to fire nuclear hip-hop missiles from the CMG headquarters. In the upcoming June issue of The Hype Magazine, they speak to the entire CMG camp and discuss their industry takeover as well as how the new additions found out that Gotti was interested in them. Ok, now to the purpose of this piece, reviewing of the 1st label project from CMG entitled "Chapter One" which represents the global launch of the brand and showcases just what drew Gotti to his signees. Standout joints "Chapter One" is a 16 track straight through listen. Next up for this writer is Gotti's "Been Thru It All." Lyrically "Different Ways" Ft. "No Kissing" Ft. Links:

ParentPowerChicago Presents 8th Global Mixx Music and Film Forum "Generation Next" Aug 15 - Aug 17 2014 Global Mixx Music and Film Forum PRLog (Press Release) - Jun. 16, 2014 - Eight years has seen the annual Global Mixx Forum grow to add a Film component to its yearly event. This years Music and Film forum will be held in Chicago Aug 15-17th, 2014. Global Mixx has been the highlight of the summer and the go-to entertainment industry conference among both local and national attendees in the business as regards the entertainment industry in Chicago, and this year will expand its reach into the film and television section. With the advancement of technology, has come more opportunity for Indie Filmmakers, music supervisors, media buyers and on-screen hopefuls, to enter the realm of film and television. Past honorary co-chairs have included Grammy Award winners; Kanye West and Common, Illinois Congressional Representatives; Danny K. City: Chicago, IL Events: Aug 15 VIP Reception at undisclosed location North DJs vs. Sunday, Aug 17Music Forum@ Zhou B.