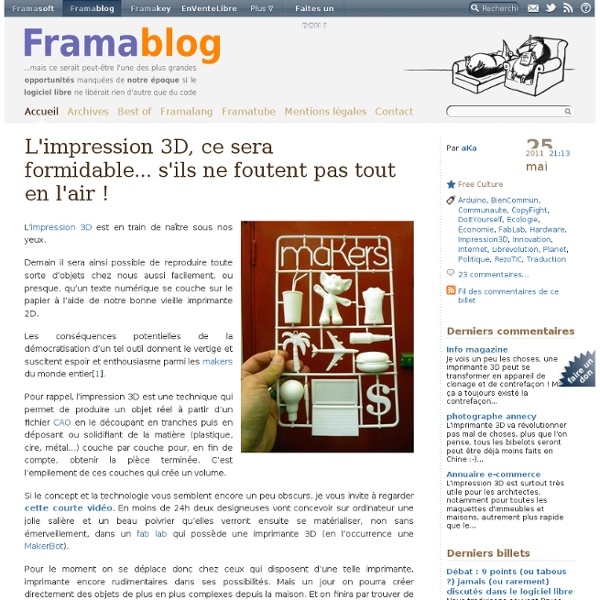 The world's first printed plane - tech - 27 July 2011 Read full article Continue reading page |1|2 Video: First flight of 3D printed plane Read more: "3D printing: Second industrial revolution is under way" The next Napster? Copyright questions as 3D printing comes of age The Penrose Triangle is as elegant as it is impossible—much like M.C. Escher’s drawings, it presents a two-dimensional illusion that the eye interprets as three-dimensional. The task of effectively creating this illusion in three dimensions, without resorting to hidden openings or gimmicky twists, seemed daunting until a Netherlands-based designer named Ulrich Schwanitz succeeded in printing the object recently. But Schwanitz, who posted a YouTube video of his design achievement in action, wouldn’t share his secret with the world.

The World’s First 3D-Printed Building Will Arrive In 2014 (And It Looks Awesome) Sure, 3D printing is fun and cute. And products like the Makerbot and Form 1 will most certainly disrupt manufacturing, even if it’s only on a small scale. But the possibilities of 3D printing stretch far beyond DIY at-home projects. In fact, it could entirely replace the construction industry. We’ve already seen folks at MIT’s Research Labs working on ways to 3D print the frame of a home in a day, as opposed to the month it would take a construction crew to do the same.

NASA proves 3D printing is headed to the stars 3D-printed space technology is no longer science fiction, as NASA and other space companies are making it a reality. Engineers and researchers at the Ames Research Center are already working with 3D printing technology to make it applicable for use in both space travel and the study of our universe, according to a recent CNET report. The potential for 3D printing on space travel is endless. The technology itself can theoretically allow structures like satellites and spacecraft to be built in space, and it’s being developed here on earth. One private company, Made in Space, is already piloting zero gravity 3D printing. It started testing in early 2011, and has made great strides in the future of out of this world 3D printing and design.

3D Printing, Intellectual Property, and the Fight Over the Next Great Disruptive Technology it is critical for today’s 3D printing community, tucked away in garages, hackerspaces, and labs, to keep a vigilant eye on these policy debates as they grow. There will be a time when impacted legacy industries demand some sort of DMCA for 3D printing. If the 3D printing community waits until that day to organize, it will be too late. Instead, the community must work to educate policy makers and the public about the benefits of widespread access. That way, when legacy industries portray 3D printing as a hobby for pirates and scofflaws, their claims will fall on ears too wise to destroy the new new thing

RepRap Project RepRap version 1.0 (Darwin) RepRap version 2.0 (Mendel) First part ever made by a Reprap to make a Reprap, fabricated by the Zaphod prototype, by Vik Olliver (2006/09/13) The RepRap project is a British initiative to develop a 3D printer that can print most of its own components.[1] RepRap (short for replicating rapid prototyper) uses an additive manufacturing technique called Fused filament fabrication (FFF) to lay down material in layers; a plastic filament or metal wire is unwound from a coil and supplies material to produce a part. The project calls it Fused Filament Fabrication (FFF) to avoid trademark issues around the "fused deposition modeling" term. As an open design, all of the designs produced by the project are released under a free software license, the GNU General Public License.[2]

3D fabbers: don't let the DMCA stifle an innovative future Last week, while unloading my dishwasher, I had a “eureka!” moment in which I suddenly understood why the machine had not been adequately cleaning up the cups and baby bottles in the upper rack: a small rubber tube had split open, and much of the water meant for the upper rack was spilling over the plates below instead. In the dark ages before the Internet, this might have meant an expensive house call from an appliance repair company. Today, it means going to the manufacturer's website, digging up the complete parts list for a decade-old appliance, and then placing an online order for the small rubber part, which will arrive in a box on your doorstep within the week. Made of Moon Dust: A 3D-Printed House for the Lunar South Pole Maybe the future has officially arrived: architects have designed a 3D-printed house for the moon, made of moon dust, that can withstand gamma rays and meteorites. London-based Foster and Partners is working with the European Space Agency on the design, which can house four people. The architects used their experience designing for extreme environments on Earth—and using local, sustainable materials—as inspiration. Rather than bringing materials hundreds of thousands of miles for construction, the plan calls for the use of lunar soil. Only an inflatable base will be flown in by rocket, and then a robot will build the rest of the structure in lightweight layers from the soil.

TED 2013: 4D printed objects 'make themselves' 28 February 2013Last updated at 05:39 ET By Jane Wakefield Technology reporter Video of cube self-folding strand courtesy Self-Assembly Lab, MIT/Stratasys Many are only just getting their heads around the idea of 3D printing but scientists at MIT are already working on an upgrade: 4D printing. At the TED conference in Los Angeles, architect and computer scientist Skylar Tibbits showed how the process allows objects to self-assemble. It could be used to install objects in hard-to-reach places such as underground water pipes, he suggested.

Proscribed Printables Interesting milestone in open-source 3D printing over at Thingiverse: User crank has published a freely-downloadable magazine for the ubiquitous AR-15 rifle. As downloaded, crank’s magazine only holds five rounds, but a person with basic 3D modelling skills could modify it with little difficulty to produce a “high-capacity” magazine. I’m not sure what the current state of law on magazine size limits is, but prior to the sunset of the Federal Assault Weapons Ban (Wikipedia) in 2004, manufacture of an AR-15 magazine with a capacity of more than 10 rounds was an offense. Crank reports that the magazine—which consists of a printable body, follower, spring, and baseplate—is fully functional, at least for a few rounds: I have used this magazine, no jams or feed problems…..

FoldaRap FoldaRap2 Release status: working In my obsession dreaming of a folding RepRap, I finally started to make one, after 5-7 months of development I'm able to travel with it around the town/country/world :) (adventures pictured on flickr / youtube / ustream)