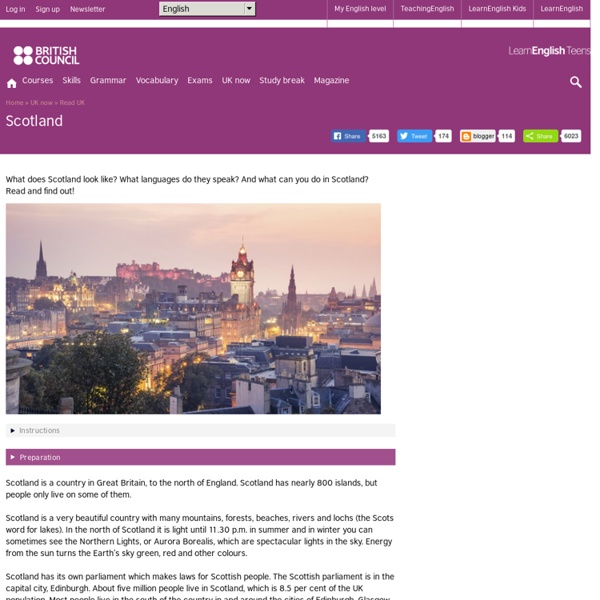 Scotland is a country in Great Britain, to the north of England. Scotland has nearly 800 islands, but people only live on some of them. Scotland is a very beautiful country with many mountains, forests, beaches, rivers and lochs or lakes. In the north of Scotland it is light until 11.30 p.m. in summer and in winter you can sometimes see the Northern Lights or Aurora Borealis, which are spectacular lights in the sky. Energy from the sun turns the Earth’s sky green, red and other colours. Scotland has its own parliament which makes laws for Scottish people. Language There are three languages in Scotland. Music At public and cultural events you can often hear traditional Scottish music and see traditional Scottish dancing. Sport The most popular sport in Scotland is football and famous teams include Celtic and Rangers, from Glasgow, Scotland’s biggest city. Food When people think of Scottish food, they often think of haggis, a type of sausage made from parts of a sheep. Symbols

Free Interactive English Choose the best word to complete the sentence. Read and listen to the news story. Owl attack A Louisiana police officer has been attacked by an owl while he was on a routine patrol, causing him to temporarily lose control of his patrol car. Covington Police officer Kasey Jackson was patrolling a quiet part of town early on Thursday morning, when he felt something hard hit the side of his face.

Four Nations Nick: This is London and behind me are the Houses of Parliament. Parts of these buildings are more than nine hundred years old. This is where the laws of the UK are debated and created. The United Kingdom is actually made up of four different countries: England, Scotland, Wales and Northern Ireland. Each nation has its own culture and heritage. Northern Ireland Northern Ireland is one of the four countries in the United Kingdom, with England, Scotland and Wales. It is to the north of the Republic of Ireland, on an island next to Great Britain. Around 1.8 million people live in Northern Ireland, which is about 3% of the population of the UK. The capital city is Belfast. Another name for Northern Ireland is ‘Ulster’ or ‘The Six Counties’ because it is made up of six regions or counties.

Passages with Text-Dependent Questions Skip to main content <div id="nojs-warning">WARNING: Javascript must be enabled for the correct page display</div> Sign InRegister ReadWorks.org The Solution to Reading Comprehension Search form England England is the biggest of the four countries in the United Kingdom. Together with Scotland and Wales, these three countries are the island of Great Britain. The English Channel is in the south between England and France. People travel to France by ferry across the English Channel or by train through the Channel Tunnel which goes under the sea. Over 50 million people live in England, that’s around 80% of the total UK population. It is a multicultural country where more than 250 languages are spoken in the capital city, London.

Wales Wales is one of the countries in Britain and the United Kingdom. It’s a small country with England to the east. Wales has got a continuous coastline, around 1,300km long, which means there are a lot of beaches! It has some of the most beautiful beaches in the UK and is a popular destination for holidaymakers and water sports fans. As well as beaches, there are a lot of mountains in Wales. Winter solstice 2015: Everything you need to know about the shortest day of the year Archaeologists believe it was constructed from 3000 BC to 2000 BC and it is thought that the winter solstice was actually more important to the people who constructed Stonehenge than the Summer solstice. The winter solstice was a time when cattle was slaughtered (so the animals would not have to be fed during the winter) and the majority of wine and beer was finally fermented. The only other megalithic monuments in the British Isles which clearly align with the sun are Newgrange in County Meath, Ireland and Maeshowe situated on Mainland, Orkney, Scotland. Both famously face the winter solstice sunrise. Game of Stones: Some new-age types at the 'Henge (Eddie Mulholland)

United Kingdom country profile - Overview 12 November 2014Last updated at 07:38 ET The United Kingdom is made up of England, Wales, Scotland and Northern Ireland. It has a long history as a major player in international affairs and fulfils an important role in the EU, UN and Nato. The twentieth century saw Britain having to redefine its place in the world. At the beginning of the century, it commanded a world-wide empire as the foremost global power.