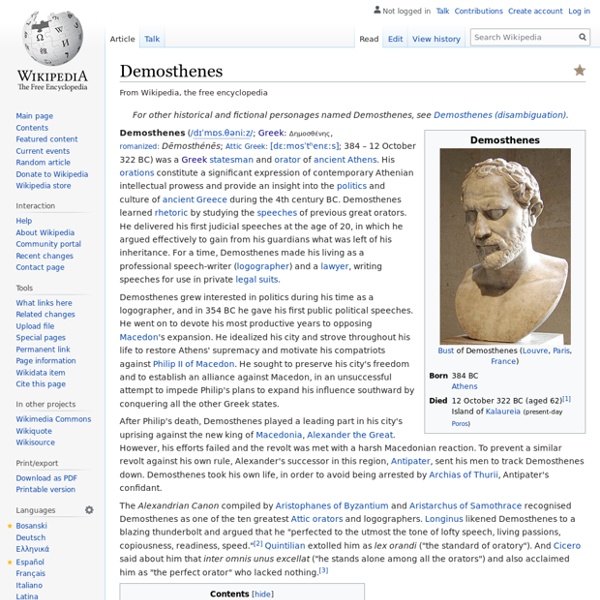 ancient Athenian statesman and orator Early years and personal life[edit] Family and personal life[edit] Bust of Demosthenes (British Museum, London), Roman copy of a Greek original sculpted by Polyeuktos. Demosthenes was born in 384 BC, during the last year of the 98th Olympiad or the first year of the 99th Olympiad.[4] His father—also named Demosthenes—who belonged to the local tribe, Pandionis, and lived in the deme of Paeania[5] in the Athenian countryside, was a wealthy sword-maker.[6] Aeschines, Demosthenes' greatest political rival, maintained that his mother Kleoboule was a Scythian by blood[7]—an allegation disputed by some modern scholars.[a] Demosthenes was orphaned at the age of seven. Demosthenes started to learn rhetoric because he wished to take his guardians to court and because he was of "delicate physique" and couldn't receive gymnastic education, which was customary. According to Pseudo-Plutarch, Demosthenes was married once. Education[edit] Speech training[edit]

Romulus Legendary founder and first king of Rome Romulus () was the legendary founder and first king of Rome. Various traditions attribute the establishment of many of Rome's oldest legal, political, religious, and social institutions to Romulus and his contemporaries. Although many of these traditions incorporate elements of folklore, and it is not clear to what extent a historical figure underlies the mythical Romulus, the events and institutions ascribed to him were central to the myths surrounding Rome's origins and cultural traditions. Traditional account[edit]

en.m.wikipedia first emperor of the Roman Empire Princeps Civitatis After the demise of the Second Triumvirate, Augustus restored the outward façade of the free Republic, with governmental power vested in the Roman Senate, the executive magistrates, and the legislative assemblies. In reality, however, he retained his autocratic power over the Republic. By law, Augustus held a collection of powers granted to him for life by the Senate, including supreme military command, and those of tribune and censor. It took several years for Augustus to develop the framework within which a formally republican state could be led under his sole rule. Numa Pompilius King of Rome Numa Pompilius (; 753–673 BC; reigned 715–673 BC) was the legendary second king of Rome,[1] succeeding Romulus. He was of Sabine origin, and many of Rome's most important religious and political institutions are attributed to him. Genealogy[edit]

en.m.wikipedia Roman politician and general Marcus Antonius[note 1] (14 January 83 BC – 1 August 30 BC), commonly known in English as Mark Antony or Anthony, was a Roman politician and general who played a critical role in the transformation of the Roman Republic from an oligarchy into the autocratic Roman Empire. Early life[edit] Antony's brother Lucius, on a coin issued at Ephesus during his consulship in 41 BC Publius Valerius Publicola Publius Valerius Poplicola or Publicola (died 503 BC) was one of four Roman aristocrats who led the overthrow of the monarchy, and became a Roman consul, the colleague of Lucius Junius Brutus in 509 BC, traditionally considered the first year of the Roman Republic. Early life[edit] The revolution[edit] In 509 BC, Valerius was one of the leaders of the Roman revolution, together with Lucius Junius Brutus, Lucius Tarquinius Collatinus, and Spurius Lucretius Tricipitinus. Winning over public opinion while the king was campaigning away from the city, they deposed and banished Lucius Tarquinius Superbus, the seventh and last King of Rome.

en.m.wikipedia Basileus of Macedon Biography Youth and accession Philip was the youngest son of the king Amyntas III and Eurydice I. In his youth, Philip was held as a hostage in Illyria under Bardylis[5] and then was held in Thebes (c. 368–365 BC), which was then the leading city of Greece. While a captive there, Philip received a military and diplomatic education from Epaminondas, became eromenos of Pelopidas,[6][7] and lived with Pammenes, who was an enthusiastic advocate of the Sacred Band of Thebes. Marcus Furius Camillus Early life[edit] The father of Camillus was Lucius Furius Medullinus, a patrician tribune of consular powers. Camillus had more than three brothers: the eldest one was Lucius junior, who was both consul and tribune of consular powers. The Latin noun camillus denoted a child acolyte at religious rituals.

en.m.wikipedia A philippic (/fɪˈlɪpɪk/)[1] is a fiery, damning speech, or tirade, delivered to condemn a particular political actor. The term is most famously associated with two noted orators of the ancient world, the Roman Cicero and, most significantly, Demosthenes of Athens in his movement against the imperialist ambitions of Philip of Macedon. Demosthenes speeches, in 351 BC, denouncing the leader later became known as "The Philippics". Quintus Fabius Maximus Verrucosus Quintus Fabius Maximus Verrucosus, surnamed Cunctator (c. 280–203 BC), was a Roman statesman and general of the third century BC. He was consul five times (233, 228, 215, 214, and 209 BC) and was appointed dictator in 221 and 217 BC. He was censor in 230 BC. His agnomen, Cunctator, usually translated as "the delayer", refers to the strategy that he employed against Hannibal's forces during the Second Punic War. Facing an outstanding commander with superior numbers, he pursued a then-novel strategy of targeting the enemy's supply lines, and accepting only smaller engagements on favourable ground, rather than risking his entire army on direct confrontation with Hannibal himself. As a result, he is regarded as the originator of many tactics used in guerrilla warfare.[1]

Julius Caesar Roman general and dictator Gaius Julius Caesar[a] ( SEE-zər, Latin: [ˈɡaːi.ʊs ˈjuːli.ʊs ˈkae̯.sar]; 12 July 100 BC – 15 March 44 BC) was a Roman general and statesman who played a critical role in the events that led to the demise of the Roman Republic and the rise of the Roman Empire. In 60 BC, Caesar, Crassus and Pompey formed the First Triumvirate, a political alliance that dominated Roman politics for several years. Their attempts to amass power as Populares were opposed by the Optimates within the Roman Senate, among them Cato the Younger with the frequent support of Cicero. Caesar rose to become one of the most powerful politicians in the Roman Republic through a string of military victories in the Gallic Wars, completed by 51 BC, which greatly extended Roman territory.

Gaius Marcius Coriolanus Roman general Veturia at the Feet of Coriolanus by Gaspare Landi Gaius Marcius (Caius Martius) Coriolanus () was a Roman general who is said to have lived in the 5th century BC. He received his toponymic cognomen "Coriolanus" because of his exceptional valor in a Roman siege of the Volscian city of Corioli. Claudius Fourth Emperor of Ancient Rome Augustus Claudius's infirmity probably saved him from the fate of many other nobles during the purges of Tiberius' and Caligula's reigns; potential enemies did not see him as a serious threat. His survival led to his being declared emperor by the Praetorian Guard after Caligula's assassination, at which point he was the last man of his family.

Lucius Aemilius Paullus Macedonicus 2nd-century BC Roman consul and general Lucius Aemilius Paullus Macedonicus (c. 229 BC – 160 BC) was a two-time consul of the Roman Republic and a noted general who conquered Macedon, putting an end to the Antigonid dynasty in the Third Macedonian War. Family[edit] Early career[edit] After the fulfillment of Paullus' military service, and being elected military tribune, he was elected curule aedile in 193.

Sulla Ancient Roman general, consul and dictator Sulla's military coup—ironically enabled by Marius' military reforms that bound the army's loyalty with the general rather than to the Republic—permanently destabilized the Roman power structure. Later leaders like Julius Caesar would follow his precedent in attaining political power through force.[3] Sources[edit] Sulla's life was habitually included in the ancient biographical collections of leading generals and politicians, originating in the biographical compendium of famous Romans published by Marcus Terentius Varro.