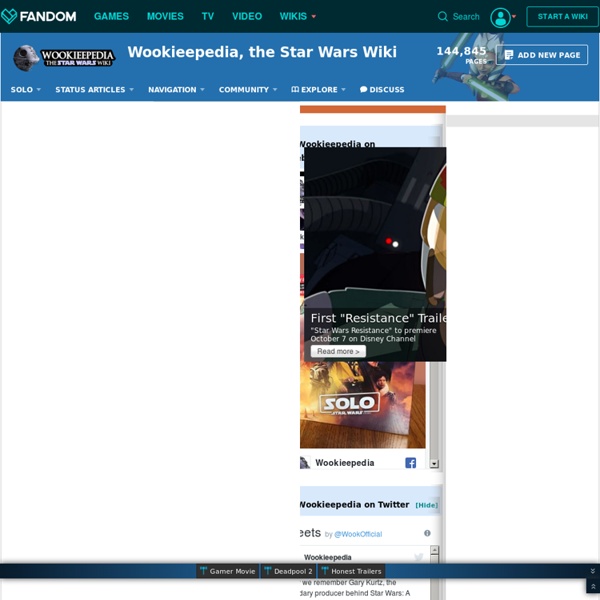 Alien Species Wiki - Aliens, UFOs, Space aliens Welcome to the Alien Species Wiki 5,546 articles since we began Alien Species Wiki is a website containing information on any alien creature ever imagined by mankind, from Star Trek's Tribbles to Wayne Barlowe's Emperor Sea Striders. The wiki format allows anyone to freely add or edit content! And feel free to browse the Alien Species Gallery, it is a good tool for learning the names of aliens you have only seen but do not know the name of. About us Leviathan - Leviathans Wiki Origin Edit The word Leviathan in modern parlance is used to describe lighter than air vessels that acheive lift through the use of electroid, though the word is primarily used in English speaking countries. The original usage of the word 'Leviathan' dates back to the Old Testament of the Bible, where the Leviathan is a terrible sea monster of enormous size. The monster in the seas to the modern Leviathans' depiction as the monsters in the skies.

StarWars Zone By Albert Ching It can be intimidating to think of a new story set in the familiar territory of the original "Star Wars" trilogy. Luckily for Matt Kindt, that intimidation led to inspiration. Despite being a fan of the franchise, the Mind MGMT" creator originally declined when Dark Horse Comics asked him if he was interested in writing a Star Wars miniseries, due both to his busy schedule and the uncertainty that he'd be able to come up with something new to the franchise. Yet his mixed emotions soon led to him discovering his idea for the story -- introducing new members of Rebel Alliance and showing how they view the icons of the Star Wars universe.

Star Wars Episode IV: A New Hope Lucas began writing the script to Star Wars after completing his previous film American Graffiti and based the plot outline on Akira Kurosawa's The Hidden Fortress and the 40's Flash Gordon serials. Lucas approached Alan Ladd, Jr. after United Artists and Universal Pictures rejected his script and the project was planned to be financed and released through 20th Century Fox. During this time, the script underwent numerous changes and Lucas founded Industrial Light & Magic to create the visual effects for the film. Filming began on March 22, 1976, and was shot in various locations in Tunisia, England and Guatemala. Save Star Wars In 1988, the American motion picture industry went through a legal upheaval that went all the way to Congress. Ted Turner had purchased the rights to studio libraries, such as MGM and RKO, and was releasing classic films in colourized versions, to surprising success. Many of the directors of these films were still alive and protested this bastardization--but alas, they had no legal case. This inspired Hollywood to go to Washington. Directors like Steven Spielberg, James Stewart, Woody Allen, John Huston and George Lucas testified before Congress in order to enact legislation that would protect artists from having their work defaced as well as ensuring the public had access to classic films--their cultural heritage--in the original form.

The Oracle of Bacon Hopefully, you've played around a bit with The Oracle of Bacon and discovered how few steps are necessary to link just about anybody who has ever been in a movie to Kevin Bacon, but could there be some actor or actress who is even closer to the center of the Hollywood universe? The answer turns out to be: yes. By processing all of the 2.6 million people in the Internet Movie Database I discovered that there are currently 369 people who are better centers than Kevin Bacon! What does it mean for one person to be a "better" center than another?

5 Data Insights into the Headlines Readers Click A Conductor study finds that the more explicit a headline is as to the reader takeaway, the more the headline resonates. The new digital economy has created a wealth of new opportunity for modern marketers across search, social networks, and digital channels. Digital marketing has brought with it the opportunity to create leads, drive engagement, and drive sales at costs far less than traditional offline channels.

Force (Star Wars) Lucas has attributed the origins of "The Force" to a 1963 abstract film by Arthur Lipsett, which sampled from many sources. One of the audio sources Lipsett sampled for 21-87 was a conversation between artificial intelligence pioneer Warren S. McCulloch and Roman Kroitor, a cinematographer who went on to develop IMAX. In the face of McCulloch's arguments that living beings are nothing but highly complex machines, Kroitor insists that there is something more: "Many people feel that in the contemplation of nature and in communication with other living things, they become aware of some kind of force, or something, behind this apparent mask which we see in front of us, and they call it God."